Mercury Rising In the Water 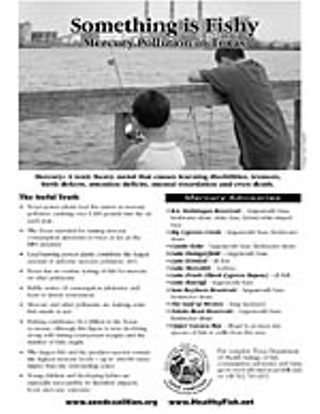 This SEED Coalition flyer is part of the effort to combat mercury pollution. Click here if you actually want to be able to read it.

The mercury is rising in Texas, but not only in your thermometer. At the Oasis Restaurant above Lake Travis, Texas Public Interest Research Group, joined by their friends in the SEED Coalition and Physicians for Social Responsibility, released Reel Danger: Power Plant Mercury Pollution and the Fish We Eat.

TexPIRG's Chris Cardinal explained that according to the U.S. Environmental Protection Agency, every single fish sample caught in Texas lakes was contaminated with mercury, with 57% deemed dangerous for women of childbearing age. Nationwide, the stats weren't much better, as 76% of fish sampled surpassed safe limits for children under 3.

The culprit? Power plant emissions, specifically from those that burn coal, account for the bulk of mercury in the atmosphere. Once airborne, it falls into our water as methyl mercury, which is ingested by the fish. Nationwide, 100% of walleyes and smallmouth bass – predator fish atop the food chain, which have thus consumed the most mercury – surpassed safe levels for women of childbearing age.

"It is a threat to the fetus, to infants, to small children," said PSR's Dr. Kimberly Carter of mercury's tragic legacy. Cerebral palsy, mental retardation, deafness, and blindness are all side effects of high levels of exposure to methyl mercury, while far lesser amounts pose the risk of learning disabilities and motor-skill difficulties for 630,000 children annually.

Texas children are most at risk, for the Lone Star State leads the nation in mercury emissions, pumping out some 9,840 pounds into the air. Of the country's Top 10 polluting plants, half call Texas home. The Fayette Power Plant, co-owned by Austin Energy and the Lower Colorado River Authority, stands as 16th worst in the nation. Other notorious lignite-burning plants in Central Texas include the Alcoa Corporation's controversial Rockdale facility.

If the White House has its way, Texas' problems may go nationwide. In keeping with President Bush's Clear Skies Act, which attempts to roll back the bulk of 1990's Clean Air Act signed by his father, the EPA has worked to slow implementation of stricter emissions standards until 2018. "This mercury rule is something that should have been addressed legislatively," said Karen Hadden of Austin's SEED Coalition. The Clear Skies plan is "literally suggesting that we take mercury out of the Clean Air Act and regulate it as nonhazardous. Something that causes brain damage in children is certainly hazardous."

The plan's proposed expansion of "cap and trade" credits among mercury-emitting plants is especially troubling; the system, which permits cleaner plants to trade unused pollution credits to dirtier ones, has never been truly utilized to "control" mercury emissions, and advocates fear it would create hot spots of intense contamination.

However, these changes have not gone unnoticed. The EPA received a record 606,000-plus citizen comments concerning their proposals. And knowledge is key, according to Hadden. "One of the things is education. Secondly, we need to be talking to the Texas Commission on Environmental Quality and to state legislators about putting in place measures that will protect Texans." 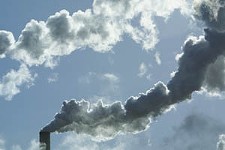