The Cost of Government? 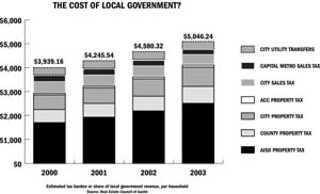 For the last few years, the Real Estate Council of Austin has released a progressively-more-hyped "Combined Cost of Government" index. This index aggregates the revenues of Austin's five big public-sector spenders – the city, Travis Co., Austin ISD, Austin Community College, and Capital Metro – and then calculates an average cost per local household, which RECA then compares to the median Austin household income for a family of four. (Next year's index will likely also include a sixth entity, the Travis Co. hospital district.)

In RECA's view, naturally, the results are not good news: Even as the economy has struggled, and local median income has grown anemically, the cost of government has gone up at nearly twice that rate, topping $5,000 a household last year for the first time. (RECA uses a calendar year rather than a fiscal year, so "2003" refers to the property tax rates in effect now, for fiscal 2004, for the city, county, and school district.) Although RECA – responding, one imagines, to the political disposition of many of its members – breaks out the city and Capital Metro for special scrutiny, the index reveals that in recent years, it's the county and school district whose costs, and share of the total cost, have gone up. They, of course, depend exclusively on property-tax revenue, which state law allows (through the mechanism of the "effective rate") to remain stable, while the sales-tax and utility-transfer revenue of the city and the transit authority plummeted through the bust.

As local elected leaders have sought to make plain, the disconnect between overall economic health and government spending isn't exactly surprising: With economic malaise comes an increase in demand for public services, particularly of the "safety net" variety (health care, social services, park and library usage, special-needs and at-risk school programs, job training). And, sadly, in public safety and criminal justice as well. Nonetheless, nobody ever lost an election by promising to be fiscally responsible and reduce the citizens' tax burden.

While the RECA index is about as good an estimate – better than the property tax bill – as exists of how much local government in Austin actually costs, it has its methodological problems. Half of Austin rents rather than owns property, and the relationship between rent and the landlord's tax bill is far from exact. Similarly, there's no good way to estimate how much sales tax collected by the city or Capital Metro is actually paid by local households – or by households within those two jurisdictions, as opposed to those elsewhere in the five-county Austin metro area. And one can dispute that the Austin utility transfer represents a tax on electric and water customers to support Austin's General Fund – as opposed to a "dividend" to the utilities' citizen-owners, the way the city has always described it. Most importantly, the index doesn't factor in state and federal spending – or the lack thereof – in the Austin area, either directly by those governments, or by local governments, or by in-betweeners like the Lower Colorado River Authority or (now) the Central Texas Regional Mobility Authority. Thus, the RECA index both underestimates the true cost of local government and obscures the ongoing trend of cost-shifting from the state and feds down to the local jurisdictions.