The social contract is now written in disappearing ink 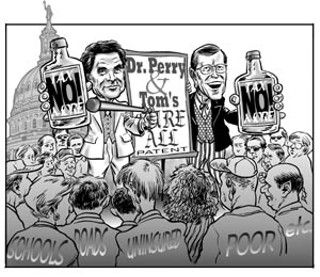 A funny thing happened on the way to this column. Last week, I made an unscheduled stop at Seton Medical Center where, for the second time this year, cardiologist Dr. David Tenneson and his merry band of miracle workers saved my life, implanting a couple of additional coronary stents that should enable my heart to go on beating unimpeded for the foreseeable future. Thanks to Dr. Tenneson, to Seton and its dedicated staff – and to a good job with adequate health insurance – I get to walk the good green earth a few more years. I am a grateful and humbled man.

While flat on my back, I did manage a little bit of work. As it happened, last week's subject (now by default this week's) was the state budget, and the continuing effects of last year's savage and shortsighted cuts on the present and future well-being of Texas citizens. These effects are catalogued in sobering detail in a report issued last month by the Center for Public Policy Priorities, "Truth and Consequences." The study is additionally appropriate to me now, as I pondered grimly what might have happened if I were one of the nearly 24% of Texans who continue to do without health insurance.

As things stand, my family will take another big hit in the bank account, a few more things postponed beyond this year. But our out-of-pocket costs will not approach the actual costs of the care and procedures that preserved my life, costs that will mostly be covered by Chronicle-underwritten insurance because I'm one of the lucky 76%. I wonder, if faced with the prospect of trying to meet those crushing expenses entirely on my own – and most likely with a job (or jobs) barely sufficient for food, clothing, and shelter – whether I would have driven over to the emergency room on a Saturday night after experiencing worrisome but rather mild chest pains.

So how did the state's leadership "balance the budget" with "no new taxes"? The statistics may be increasingly familiar, but the personal, family, and community devastation continues.

They radically cut state education staff, including those assigned to monitor the much-troubled charter schools; they cut school programs and textbooks; they cut health insurance for teachers and school employees. They cut higher education, including universities as well as community colleges, all the while boasting of the state's "educated workforce." They cut health care, of course, and they cut aid to the neediest, even while the economy was creating more need.

Here are a selected few of the lowlights:

146,000 children and 28,000 adults have been removed from health care services under Children's Health Insurance Program or Medicaid. 8,144 women per month have been removed from maternity coverage under Medicaid. 112,000 people – adults and children – have lost all cash welfare (Temporary Assistance to Needy Families). Services no longer covered under Medicaid in Texas include most mental health therapy; eyeglasses or hearing aids for adults; podiatric care for adults (e.g., diabetics); and "spend-down" coverage for poor families with catastrophic health bills. Meanwhile, thousands of people have been removed from Medicaid MHMR coverage, due to the narrowing of the definitions of "priority" services – that is, if you're not already suicidal (or homicidal), don't bother to call.

Hidden among these broad outlines are little revelatory nuggets of meanness. A $60 annual payment for 220,000 children on welfare – an already laughable back-to-school supplement – was cut in half.

There were also bureaucratic shell games, e.g.: a high caseload projection for drawing down federal Medicaid dollars, but a low one when estimating state expenditures for the very same people. Unsurprisingly, the lower caseload projection is now proving inaccurate, and the state is planning to use federal funds earmarked for one-time fiscal relief from the economic recession to make up for its dishonest caseload projections.

The larger historical trends, imposed by Republicans and Democrats alike, are also illustrative. "In 1996, cash assistance ... reached 22% of the 3.2 million poor persons in Texas; by 2002 only 11% of the state's 3.4 million poor were receiving [cash assistance]."

So much for the inexorable march of the welfare state.

The cuts have also meant sharp reductions in the number of state employees – prison guards as well as social workers, whichever your preference – and that trend continues, even while the population grows. Under direct legislative budget cuts, some 2,300 workers will be eliminated at health and human service agencies, among 4,900 state employee layoffs overall. Last week, several legislators, the state employees union, and public interest groups called on Gov. Perry to halt the HHS reorganization pending further legislative review – particularly in light of oversight scandals now simmering at Adult Protective Services and Child Protective Services, agencies theoretically in charge of safeguarding the most vulnerable Texans.

Under the state's current plans (HB 2292), thousands of the caseworkers now assigned to working with the needy will be replaced by centralized "call centers" and online application forms – enabling people with insufficient access to food, medicine, and other necessities to log on to their handy laptops and petition their government for help. Asked about the spreading call for a moratorium, the governor's spokeswoman said the call centers are just fine with him.

More than 75 counties, facing the inevitable local consequences of this legislative dereliction – and no doubt run by notoriously radical county commissioners – have joined the call for a moratorium. According to the TSEU, "The changes have already reduced federal and state funds to Texas, via reduced Medicaid and CHIP program reimbursements, by $2,274,705,684."

In short, the state of Texas has this helpful message for local citizens and officials concerned with maintaining the public welfare: "Don't call us." There are probably many names for this self-destructive, even delusional approach to government policy, now ascendant in Texas and across much of the U.S.

"Conservatism" isn't one of them.

The full Center for Public Policy Priorities study –"Truth and Consequences: The State Budget for 2004-2005 and Its Impact on Texas" – is available at www.cppp.org.