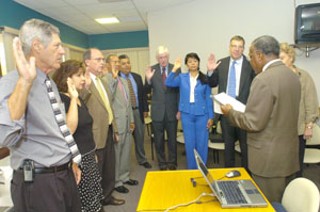 County Judge Sam Biscoe swears in the nine new members of the Travis Co. Hospital District Board of Managers. (Photo By John Anderson)

The nine members of the new Travis Co. Hospital District Board of Managers got a crash course Monday on what to expect during their first year of volunteer duty: long meetings, reams of paperwork, and the perpetual challenge of keeping a cash-strapped public health care system afloat.

The district started its first week in the middle of a financial dispute that has county officials pointing accusatory fingers at the city for diverting $33 million from the former Brackenridge Hospital reserve fund in 2002 – when plans for a hospital district were just getting off the ground – and transferring that money into a "budget stabilization reserve" to shore up the city's General Fund. County leaders say that at least some of that money needs to go to the district; city officials say they've already paid quite enough over the decades that Austin has borne the lion's share of costs for local public health care – an inequity the district is designed to address.

The board is expected to draw up a budget to present to the county commissioners Aug. 19, which will require at least one more board meeting before then. The district is starting out with the barest of bones – at present, it's slated to get $3 million from the city and less than $1 million from the county. "That's obviously not enough," said board Chair Clarke Heidrick, before going into executive session Wednesday to hear legal advice regarding the city's $33 million "raid."

Heidrick and Vice-Chair Carl Richie II, meanwhile, are proceeding cautiously with their public comments. "I'm going to reserve judgment until I have all the facts," Richie said. "I've only heard one side of the story, and I haven't heard the city's response."

City and county department heads spent Monday providing a reality-based picture of health care in Travis Co., which looks something like this:

24% of the population is uninsured.

The department heads – old hands at speaking the shorthand language of public health care – got a reality check of their own when one of the board members asked, "What's a MAP?" The county's Medical Assistance Program is just one of a number of bureaucratic acronyms the board members will need to know. The MAP question reminded Trish Young, chief executive of the city's Community Care Services Department, that she had brought along a helpful cheat sheet – a glossary of acronym definitions – that she had copied for the board members. They each took their copy and squinted at it thoughtfully.

Young continued with her PowerPoint presentation and paused when another grim set of numbers appeared on the screen. "These are the statistics that keep me up at night," she said. In June, the city's MAP intake system, with two telephone lines, received 250,000 calls from people wanting to schedule an appointment to determine their eligibility to receive assistance. Only 10,000 of those calls were "queued" for answering, meaning one in 25 callers were fortunate enough to reach a human being – if they endured being on hold for 30 minutes. The county's walk-in system isn't any more successful. Long lines form early in the morning for a first-come, first-served MAP process.

The Texas Legislature's most recent ravaging of health care funding has taken a devastating toll on city and county services, whose enrollment of uninsured residents increased 92% between April 2001 and April 2004. "We are so full," Young said, "that we are not providing the kind of preventative and maintenance health care that we're designed to provide."

It's uncertain whether the creation of a single government entity will be able to do much better, given the budget constraints. City and county officials continued providing financial details on Wednesday, after launching into mind-numbing numbers late Monday afternoon – about the time that stifled yawns were sweeping across the room. The board will need to adopt a budget in short order to have a fully operational hospital district by Oct. 1, when the new budget year takes effect. (At that point, the city and county are required to reduce their budgets and tax rates and transfer their health care outlays to the district.)

In any case, the initial fiscal outlook presented Monday wasn't altogether promising. When hospital district proponents were championing the proposal a year ago, city residents were paying 7.3 cents (between their city and county taxes) per $100 of assessed property value for public health, while county residents were contributing 1.3 cents. Now, city dwellers are seeing 7.7 cents per $100 valuation going toward public health care, while county residents are providing 1.4 cents. The good news is that once a tax rate is set, city and county residents will be paying the same amount. The bad news is that the tax rate yet to be set is one of the unknowns in a health care system that seems to grow more frail by the day.

One of the board's first orders of business was to elect a chairman, and the managers predictably tapped Heidrick, who headed the steering committee that led the effort culminating in May's voter approval of the district. Attorney and lobbyist Richie

will serve as vice-chair. A former city Housing Authority commissioner, Richie said his interest in mental health issues led him to apply for a seat on the hospital board. "I grew up relatively poor," he said during a morning break, "and my mother battled mental health issues all her life. It did have an impact on my life."

Is There a Doctor in the House?
Below the budget storm clouds, plans form for a UTMB campus at Mueller