At both City Hall and the courthouse, it's all quiet on the fiscal front 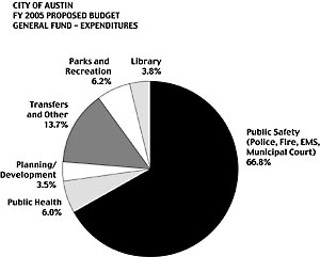 For both the city and the county, the bulk of the General Fund is consumed by public safety, crime, and courts. At City Hall, administrative overhead – what Travis Co. calls "general government" expense – is paid out of a separate fund. Both city and county will be transferring much of their public health spending to the new Travis Co. Hospital District once that newborn entity has its own budget in place.

After several years of chaos, it appears that local governments are ready for some boredom on the budget front. "Fiscal 2005 is about staying the course," City Manager Toby Futrell told the City Council last Thursday, as she released her proposed spending plan for the year beginning Oct. 1. "I believe this budget sets the stage for moving forward in a sustainable environment." And over at the Travis Co. Courthouse, county financial honcho Christian Smith sounded a nearly identical message with the July 28 release of the county's preliminary budget. "It should come as no surprise," he writes, "that key themes of this ... budget are continued restraint and caution [and] the use of existing resources to meet new needs."

Lean Operations at the City

Despite the consistency of the hold-the-line message – which both city and county share with AISD (see p.26) – both budgets are growing, after a fashion. The city's General Fund, fed by your sales and property taxes and revenue transfers from the city-owned utilities, is budgeted for $448.9 million in spending, a $10 million drop from the current fiscal year. (The overall city budget, including the utilities and other "enterprise funds," is just shy of $2 billion.) But that reduction is largely being driven by the transfer of the city's $30 million annual health care portfolio to the Travis Co. Hospital District, along with "efficiencies" borne of dismantling the Transportation, Planning, and Sustainability Department and creating the much-vaunted "one-stop shop" for development review.

Actual spending for most General Fund departments – especially police, fire, and EMS – is slated to increase, which is largely a function of Futrell's insistence that, after three years without raises, city employees need a pay hike. (Public safety employees get bigger raises, and the city's sworn police officers get still bigger raises under the terms of their "meet and confer" labor contract.) In addition, facilities approved by voters in 1998's massive bond package continue to go on line – including, in fiscal 2005, the Carver Library and Museum and fire and EMS stations in Del Valle and in Circle C Ranch. And, indeed, in the time-honored City Hall tradition, Futrell has found a little play money for the council – $200,000 in "unallocated surplus," to be exact. 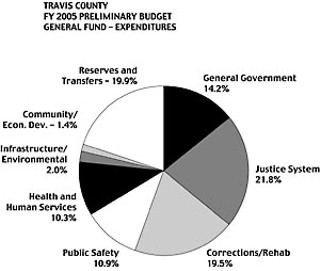 The proposed budget includes a net reduction in the General Fund headcount – even with the reassigning to the "one-stop shop" of dozens of positions that used to be part of other city funds. But unlike last year, Futrell has managed to avoid laying off actual flesh-and-blood employees. Overall, the news is much better than was expected a couple months back, when Futrell and Budget Officer Rudy Garza had forecast a $19.4 million gap to be closed in the General Fund. An unbudgeted (though much appreciated) rebound in sales-tax revenue and additional funding from Capital Metro for transportation projects helped make the impact far less dramatic, and few fireworks are expected in the upcoming budget hearings.

"While you will find very lean operations throughout the organization," Futrell told the council, "you will also note that we are well-positioned to rebuild our programs and service levels as the economy rebounds." Futrell has made clear she thinks the current level of city services – with the General Fund's 25% overall shrinkage since the boom went bust – is still good, but on the verge of not good enough. Interestingly, one of the few new initiatives in her budget is the creation of a city Integrity Office, a response to her concern that overworked employees in underfunded departments may be tempted to cut corners or cheat.

Caution at the County

Meanwhile, the county is budgeting $337.5 million for its General Fund – largely fed by property taxes – which is a $14.6 million increase over the current fiscal year. (The county's total budget is expected to be just under $500 million, which includes debt service, employee insurance, and other overhead; the county has no "enterprise funds" equivalent to the city utilities.) Unlike at City Hall, this is not a reversal of past trends; last year, direct spending by county departments increased $11 million, while city departments saw their budgets remain flat at best. And that was after the Travis Co. Commissioners Court asked county departments to cut their budgets, leading to $5.7 million in reductions. This year, Smith tells commissioners that he "has exercised caution in recommending further reductions in FY05." In other words, there aren't any. Indeed, the county is adding 45 positions to its General Fund personnel roster – some of which were formerly paid with grant funds, some attached to new revenues, and eight earmarked for opening the county's new East Metro Park.

The county is also laying down cash for employee salary increases, foregone in last year's budget – including the always volatile, but fiscally minor, issue of elected officials' salaries. (The county already committed last year to raise the salaries of district judges.) And it's spending small amounts of new money on the eclectic array of services the county offers – ranging from the county attorney's newly enhanced environmental enforcement program (to "promote a cleaner and safer Travis County") to the escalating cost of indigent defense, to operating the county's juvenile probation facility, to paying for management of the county's portion of the Balcones Canyonlands Preserve. In many cases, these new county expenditures are to offset funding cuts at the state level.

Unlike the city, the county has not yet calculated how much of its budget will be transferred to the new hospital district, though Travis Co.'s share of local public-health funding has (controversially) been a fraction of that borne by the city. Both city and county have crafted their budgets assuming the property tax "effective rate" – 50.65 cents per $100 for the city, 50.16 cents for the county, a 2% increase for both. The county likes to point out that it offers a homestead exemption, so its share of the tax bill is about 20% smaller than that of the city. Futrell already has figured that about 6 cents of the city's tax rate will end up being transferred to the hospital district – as required by the state law authorizing the district, whose own tax rate and budget will need to be approved by the Commissioners Court.