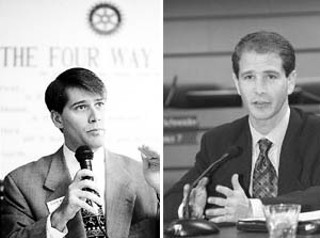 If Austin state Reps. Jack Stick and Todd Baxter ever suspected they'd be vulnerable targets by the end of their freshman terms, they sure didn't act like it. But two Democratic challengers to their House seats have by now shaken any sense of security the GOP incumbents may have had – dollar for dollar.

In two of the most closely watched races in the state, Democratic challengers Mark Strama and Kelly White are proving themselves formidable fundraisers on the trail, bringing in more campaign cash than any other first-time Democratic House candidates in the state. Meanwhile, Stick's office says, the District 50 incumbent chose on principle not to accept campaign contributions during the special session this spring, even with an election just months away. What was he thinking? He was thinking, says one state Democratic pundit, that he'd have time to catch some R&R over the summer before coasting to re-election on Nov. 2.

His opponent Strama, an entrepreneurial techie with a political bent, would soon change Stick's point of view with the release of his July 15 campaign finance report, which arrived thick with contributions totaling $225,826 raised since January. More than $38,000 of that amount came from online donors. Stick – whose own report took nearly a week to show up on the Ethics Commission Web site – collected $121,450 during the same period.

As it happens, Strama and White are reaping the benefits of the Texas Democratic Party's do-or-die mission to regain the House that Republicans wrested from them in 2002. The GOP takeover was largely attributed to massive sums of private corporate money pumped into House races – including the Stick and Baxter campaigns – by way of the Texas Association of Business and Texans for a Republican Majority, which are now under criminal investigation for possible campaign finance law violations.

The Democratic resurgence played well in Travis Co., where in the March primary Dems outnumbered Republicans at the polls by more than 2-1. "White and Strama are in the very top tier of the Democrats' hopes for gaining back the state House," said Mark Nathan, whose political consulting firm (with Christian Archer) provided some initial consulting work for White's campaign. "There are a lot of hopes and dreams pinned on these two faces."

Here at home, White is giving Baxter a run for his money, taking in more than twice as much as Baxter in the first half of the year. White, who like Strama is a first-time candidate, is drawing on her dollar sensibilities as the former executive of SafePlace (since renamed Kelly White Family Shelter), a nonprofit that she is credited with growing substantially during her tenure. What White's campaign may lack in political experience it makes up for in financial success. The candidate's July report shows big donations from the likes of businesswoman Bettye Nowlin, who kicked in $10,000; Luci Baines Johnson, in for more than $5,700; and the Annie's List PAC, $15,000 with another $3,500 pledged.

Down in Hays Co., Last Man Standing star Patrick Rose, D-Dripping Springs, is making a killing with more than $500,000 raised so far as he braces his District 45 seat against the deep pockets of far-right Republican Alan Askew of Wimberley. The Rose campaign knows that the $15,455 in contributions that Askew reported for the first half of this year is just a fraction of what's to come. By all accounts, Rose is campaigning as hard as he did the first time around, when he beat incumbent GOP Rep. Rick Green by just 335 votes. "We're doing all the things that we did last time, only better," Rose said this week before heading out to a Rotary Club meeting. "And we're going to continue to hustle."

Rose points out that he is not accepting donations from big insurance or trial lawyers; the latter group, generous contributors when he ran against Green, are still fuming over Rose's votes for tort reform in 2003, and are not exactly tripping over themselves to drop money into his war chest. (As a side note, a minor controversy broke out on the campaign trail when two big Texas trial lawyers – Mark Lanier and Walter Umphrey – contributed $2,500 to the Askew campaign under the Texans for Family Values PAC. Askew accepted the contribution, but then gave it back in an apparent response to complaints from both sides of the race. Askew did not return a call seeking comment.

The Texas Trial Lawyers Association would not comment on where its PAC money will go this year, but at this juncture Rose's campaign is not on its destination list. One of the group's own noted that there is still "extreme anger" toward Rose, who nonetheless steadfastly stands by his tort-reform vote and vows to tackle insurance reform in the next session. Texas Democratic Party Chair Charles Soechting, himself a trial lawyer and a resident of District 45, had initially threatened to recruit an opponent to Rose in the Democratic primary, but changed his tune after taking over the state party operations in October 2003. Soechting's support for Rose has put him at odds with the TTLA. "He's lobbied us on Patrick's behalf," the trial lawyer source said. "He's doing his own thing now, but I can understand that. Where you stand depends on where you sit."