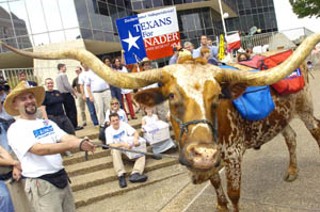 Arguing that there is "no compelling state interest" to justify Texas' onerous ballot-access requirements, lawyers for Ralph Nader's Texas presidential campaign made the case in federal court in Austin last week that Nader's name should appear on the November ballot alongside those of major party nominees John Kerry and George W. Bush. Following the two-hour hearing July 22, U.S. District Judge Lee Yeakel said he would issue a ruling as quickly as possible, probably within two weeks.

Under the current rules, indie candidates like Nader had to have submitted 64,076 valid signatures – 1% of the Texas vote in the 2000 presidential election –by May 10, or 60 days after the March party primaries. Third parties, like the Greens or the Libertarians, only had to submit about 45,000 signatures, and they had until May 24 to do so. (In both cases, the signatures must be from voters who did not cast a ballot in either major party primary in March.)

Coming into the hearing, both sides stipulated that the Nader campaign had submitted somewhat fewer than 64,076 signatures by May 24, leading Burbach to argue that the Nader campaign "can't even meet the May 24 deadline," and that the state's rules simply require "a reasonable demonstration of the seriousness of the candidate." The state also noted that Ross Perot in 1992 and 1996 and Pat Buchanan in 2000 had managed to meet the requirements for independent candidates.

Linger responded that Perot is a billionaire and Buchanan had received millions in federal matching campaign funds, and are not comparable to a Nader campaign that relies heavily on volunteers. The hearing featured one small surprise: testimony from longtime Austin activist Linda Curtis, president of Independent Texans, who served as a petition consultant to the Nader campaign and who has challenged state ballot-access laws in the past. Over an objection from the state, Curtis testified that she had "never experienced a [petition] drive this difficult," pointing to numerous incidents of petitioners being harassed, intimidated, or ordered to leave public venues like parks and university campuses.

Curtis attributed these difficulties primarily to opposition from Democrats who blame Nader for the 2000 defeat of Al Gore, but it was unclear how that testimony – or the "tornadoes and bad weather" cited repeatedly by attorney Linger – might bear on the state's ballot-access rules. Asked several times by Yeakel to specify exactly how the rules might work against the rights of an independent candidacy, Linger said the court should consider not only the individual ballot requirements but "the totality of the effects of the rules" in creating an unreasonable burden.

Yeakel also asked what the impact would be if he ruled that the May 10 deadline was unreasonable but the higher signature threshold was itself valid –since the Nader campaign had failed to reach the higher number by May 24. Burbach said that should end the matter; Linger suggested that the court could allow some limited additional time for the signatures to be gathered.

The hearing took place in the context of increasingly bitter sniping between the Nader campaign and state parties in swing states – including Michigan, Oregon, Arizona, Florida, and most recently Iowa – where Republican activists have stepped in to gather thousands of signatures for Nader and Democrats are counterattacking by contesting signatures, litigation, and other tactics. (In Texas, of course, the ballot-access laws are being defended by a GOP administration.) In a phone interview last week, Nader campaign spokesman Kevin Zeese accused both major parties of interference but harshly denounced the Democrats for an "organized effort to keep Nader off the ballot." Zeese said the campaign wants only "to leave it up to the voters to decide," and said that Democrats are simply afraid that voters will choose Nader over Kerry.

Texas campaign spokeswoman Debbie Russell said that whatever the Republicans may be doing, "The 40,000 people who signed those petitions were supporting Ralph Nader, and there is no reason for us to turn away their signatures. I think it would be highly unethical for us to do so." Russell charged that petitioner harassment increased after the Texas Democrats posted a message on their Web site discouraging people from signing Nader's petitions. En route to Boston for this week's convention, Texas Democratic Party spokesman Mike Lavigne replied that one e-mail hardly constitutes an anti-Nader campaign, but that in any case he continues to believe "a vote for Nader is a vote for Bush." "Ralph Nader," he continued, "has become nothing more than a shill for the Republicans."

Zeese said that it will be at least mid-August before the campaign knows the number of states in which Nader will be on the ballot (Texas has by far the earliest petition deadline), but that the goal remains "in the 40s." In 2000, Zeese said, Nader was on the presidential ballot in 43 states and the District of Columbia.