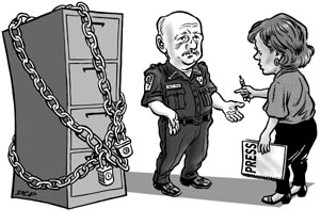 Travis Co. District Judge Lora Livingston ruled on July 22 that under the Texas Public Information Act, the city of Austin may withhold from public disclosure routine administrative documents – which would otherwise be public – when those documents have been deemed evidence in a law enforcement investigation. However, she opined from the bench, the TPIA's so-called "law enforcement exception" is not an indefinite proposition.

At issue are a year's worth of Austin Police Department time sheets and off-duty contract logs for two former APD officers who the city says are currently under investigation for allegedly "double-dipping" – punching the city's time clock as officers working in the APD's homeland security detail, while actually working secondary, private-sector jobs with Signature Science, an Austin company that specializes in homeland security and counter-terrorism training. The two officers, Cpl. Craig Miller and Sgt. Steve Simank, resigned from APD a week after their supervisor initiated the investigation, and are now employed by Signature Science.

In March, the Chronicle requested a year's worth of Miller and Simank's time sheets and off-duty logs, but the city denied that request, claiming the documents were evidence in a criminal investigation and that their release would hinder the "detection, investigation, or prosecution of crime." In an April opinion, the Texas Attorney General's Office open-records division agreed. The Chronicle disagreed, and last month filed suit against the city, arguing that the law does not allow the city to withhold routine and normally public administrative documents – and not privileged documents created in the course of an investigation – simply because those particular records may now be of interest to investigators.

In court, Assistant City Attorney Laurie Eiserloh called APD Integrity Crimes Unit Sgt. Mark Spangler to the stand to testify about the irreparable harm his investigation would suffer should the city be required to release the Miller and Simank records. His main concern, he told Livingston, was that if the documents were made public, Miller and Simank would have the opportunity to come up with a "story" to explain any discrepancies between the time sheets and off-duty logs.

"So, you might not be able to obtain incriminating statements from [the] suspects, if [the documents] are released?" asked Chronicle attorney Jim Hemphill.

"Yes," Spangler replied. "That is correct."

Ultimately, Livingston agreed that the city should be allowed to withhold the documents while police investigate. Still, "at some point there ought to be a timely response to this request," she said. "At some point we've got to open that up. It seems like [at some point] the – for lack of a better description – 'public watchdogs' ought to be able to grade not only the officers' performance, but also the city's actions," she continued. "If the city knows about it and doesn't investigate in a timely fashion ... the public is entitled to know whether [the accused officers] have done something inappropriate and whether the city has done something about it in a timely fashion."

Spangler told the court that the Miller-Simank investigation is a "high priority" within the department, but that "document cases" are "time-consuming." And although the investigation began in March, Spangler told the court that investigators still haven't sought to interview Miller or Simank. Further, while Spangler testified that his main concern with releasing Miller and Simank's time records is that public disclosure might tip the officers to the investigation, the sergeant also told Livingston that the two former officers may already know what's going on.

"Do they know?" the judge asked.

"I don't know," Spangler replied. "If they read the Chronicle they do."

As we reported in our July 16 issue ("You Can't Have That!"), APD Cmdr. Ricky Hinkle, a supervisor in the Homeland Defense Unit to which Simank and Miller were assigned, appears to have filed an offense report on March 19, in response to what he earlier had described as "time sheet concerns" as a result of "off-duty employment." Independently, other sources had informed the Chronicle of alleged discrepancies in the time sheets and off-duty logs that supported charges that officers had simultaneously been paid for the same work by APD and Signature Science. In some cases, the officers were alleged to have reported working in excess of 24 hours a day. Miller and Simank resigned on March 26; the Chronicle first requested the officers' APD time sheets and off-duty logs on March 29. In our July 16 story, Simank denied any knowledge of the allegations of double-dipping. "We left [APD] for other reasons and our business [with Signature Science] was doing really well."

Signature Science, a for-profit spinoff of the nonprofit San Antonio-based Southwest Research Institute, has had a close relationship with APD since late 2001, when it began providing homeland defense training to the department. The company, which has received at least $39,000 from APD, now employs not only Simank and Miller, but retired APD Cmdr. Joe Putman, who formerly headed the department's Homeland Defense Unit, and retired APD Assistant Chief Jimmy Chapman, who oversaw Putman's unit in the APD chain of command.