Road Foes: Down, But Not Out? 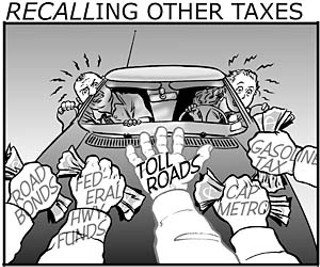 The next couple of weeks will likely reveal whether the coalition opposed to the regional toll road plan will hold or fold after the defeat of last week's vote. The 16-7 split on the Capital Area Metropolitan Planning Organization's Transportation Policy Board in favor of the Central Texas Regional Mobility Authority's $2.2 billion toll road plan was met with much wailing and gnashing of teeth – as well as promises to unseat those elected officials on the CAMPO board who favored the toll road plan.

Of course, the lawmakers who voted for the plan are in the urban core where congestion is the worst and interest in toll roads is the highest. Lawmakers in the areas most directly impacted by the plan – like Circle C and Western Travis County – voted against the plan, which could lead some to say that those lawmakers pretty much have their re-elections guaranteed.

Rep. Terry Keel, R-Austin, who scorned the William Cannon bridge project as a "double tax" on the community, says he does not intend to step away from the toll road fight. At last week's meeting, Keel was the angriest of the toll road opponents on the CAMPO board, calling Texas Department of Transportation District Engineer Bob Daigh's prediction of fiscal dire straits "a gross exaggeration."

"I remain firm in my opposition to this plan and will do everything possible to see that the vote is rescinded," Keel said this week. "In the last 25 years, I haven't seen greater genuine public opposition to a policy decision in this community. I think that it's deep-rooted, it's genuine, and it isn't going to go away."

But opposition to the toll road plan was a bit of an unholy alliance between anti-sprawl pro-environmental types and the pro-road community. The Save Our Springs Alliance is probably not on Travis Co. Commissioner Gerald Daugherty's holiday card list – at least not until now. Nor has Rep. Todd Baxter, R-Austin, been known to leap from his seat on the House floor to protect the Edwards Aquifer.

SOS Alliance Executive Director Bill Bunch admits Daugherty, Baxter, and Keel were not close allies during the initial foray against toll roads, but he plans to make sure they are closer friends to the Austin environmental community. "The thing that we really do have in common is anger – over how an issue as important as the toll road system was crammed down our throats on such a fast track, regardless of whether you are for or against toll roads," Bunch says. "The commonality between us and Keel and Daugherty is the desire to see that the public have some voice in this."

One key factor influencing how long the anger will last will be how those toll road projects unfold. The first roads set to open – State Highway 130 and SH 45 Northwest – have (at least since their initial approval several years ago) been uncontroversial compared to their southern siblings. If those open successfully, it may allay some of the community fears. If they open poorly, woe be to the CTRMA in getting future projects off the ground.

Comparing the CTRMA to the TxDOT operations it has supplanted, Heiligenstein notes that "the truth is that the Central Texas RMA has a much higher level of accountability than most transit agencies." Heiligenstein also points out the qualifications of the CTRMA board, which includes among others Bob Bennett, now-retired Round Rock city manager for more than two decades, and former Austin City Council Member, UT regent, and all-around man-about-government Lowell Lebermann.

Heiligenstein dropped a note to Council Member Daryl Slusher this week, saying that the CTRMA did not, nor would it ever, support condemning land in Zilker Park for new lanes on MoPac – one of several issues cited by Slusher to explain his vote against the plan – or ignore the concerns voiced by Slusher and others about preserving the Pennybacker Bridge on Loop 360. (The CAMPO board voted to allow the CTRMA to move forward on planning, but not construction, of toll lanes on Loop 360.) The CTRMA director also points to the already-approved U.S. 183-A toll project – on which Heiligenstein has doubled the usual budget for "aesthetics" – as an illustration of the agency's commitment to Austin values. Bunch, on the other hand, says if the CTRMA was really committed to environmental issues, it would take the $700 million devoted to toll roads over the aquifer and spend it on buying parkland.

The one key figure notably absent from the toll road debate is Capital Metro. The transit authority, as Daugherty has pointed out, has both the regional focus and the "rainy day" funds – and ongoing sales tax revenue – to pay for some of the more controversial projects without instituting tolls. Certainly, Cap Metro could conceivably fund the headache-inducing South MoPac bridge over William Cannon, the most inflammatory of all the CTRMA's proposals. Any decision to step into the fray, however, is unlikely to be made before an anticipated commuter rail election in November. 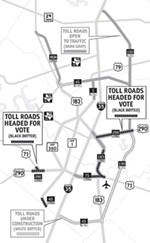