For the next round of protests, the DPS has new toys 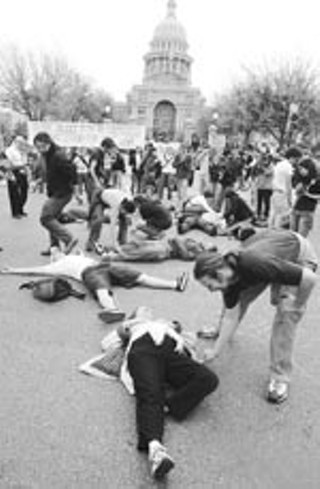 Demonstrators "playing dead" at the Capitol may no longer have to fake it. (Photo By Jana Birchum)

You will now face tear gas and rubber bullets if you try to make trouble in Texas.

In case of uncivil disturbance – that is, political demonstrations or protests, against either the current state or national government, or both, or anybody else – the Texas Department of Public Safety has decided to use lead shot-filled bags and rubber bullets, in addition to the standby favorite, tear gas. Because of a concern that gas might negatively affect business in high rises downtown, however, the normal "escalation of force" to meet a threat might have to be bypassed altogether – with DPS skipping gas entirely and going straight to rubber bullets.

The Texas Public Safety Commission considered these issues, more fallout from the new era in homeland security, in a formal policy meeting earlier this year. In the short term, the only possible event that comes quickly to mind – with the potential for the laying on of hands – is election night 2004. If on Nov. 2 the coalition of the willing meets the coalition of the unwilling in the middle of Congress Avenue, there could be trouble.

If you believe in the similarity between the war on terror and the war in Vietnam, as some do, the next step is civil unrest in this country. DPS wants to be ready. They've opted for the Israeli solution.

"We are in the process of acquiring what are called 'less-than-lethal-impact munitions,'" DPS Traffic Law Enforcement Chief Randall Elliston, whose responsibilities include Capitol security, said at the Public Safety Commission meeting in February. Of the new weapons he added, "These are devices that will be placed at a level on our force continuum above the use of gas, so that should we have to employ gas in an area to disperse a crowd or control an angry crowd – if that didn't work we would go to these less-than-lethal munitions." Chief Elliston described the new weaponry as "target-specific devices that you would actually impact an individual with."

At the meeting, he told the commission chair, Colleen McHugh, that the new devices include bags filled with lead shot to be fired at protesters, as well as "skip devices" from shotguns or a handheld 37 mm cannon – the kind normally used to fire tear-gas canisters. Gas will be used first, if it can be, and then the weapon would be aimed at the ground, according to the chief, with rubber projectiles then bouncing up to hit demonstrators "along the ankles, legs, and knees."

"If you should have to do that," Elliston added.

The chief said that the weapons will be color-coded and that state troopers will inform the crowd before and after their use so that the public "will know we're not shooting them with live rounds." The logistics of gas use seem to be a particular concern of the department. Apparently there are dangers to commerce, as well as to public order.

Chief Elliston again: "Sometimes, when you're in a situation where you have to deploy gas, if the weather's not right you can't do that because it will blow back on you, or if you're in an area like Austin downtown, if you deploy gas in those areas, the building ventilation intakes take it in and you run everybody out of the building." He added, again, "We certainly hope we never have to use it."

Of course rubber munitions are no cure-all for civil unrest. In Israel's Occupied Territories and in Northern Ireland under the British, the bullets have bounced up – and occasionally haven't bounced at all – and hit protesters in the head and killed them. Still, the state police are upbeat about the prospects for the new technology, describing the benefits of rubber vs. lead. DPS is buying the equipment for use by riot squads across the state – but we in the capital city are most likely to be the lucky ones who will actually see it in use, if it's ever necessary.

"Sometimes deadly force is something that we use pretty quick," said Col. Tommy Davis, the DPS director, "and it's necessary that we use it quick. But this," Davis said of the rubber bullets, "is something where you have, say, demonstrators at the Capitol."

In the past several months there has been a general lockdown and ass-tightening among state officials in Austin, specifically in regards to physical security.

Some of the concern is understandable. The Capitol could be a big, fat, fairly juicy, soft target – and not just because this is President Bush's home state. His official portrait, a reminder of six years' leadership, hangs in the rotunda at 11th Street and Congress Avenue, and would seem like a perfect target for graffiti, if nothing else.

The security forces would not, however, be amused. Their concern is similar to the pre-emptive, "not on my watch" philosophy that has entirely taken over Washington. Within a mile or so of the Capitol dome are the governor's mansion, the headquarters of most of state government and city government, federal offices, state and federal district and appellate courts, county offices and county jail, the police department, the regional trauma center, the beginning of the UT campus, and the Sixth Street entertainment district. A determined bad actor could do a lot of damage.

It's just not exactly clear who the enemy might be.

Earlier this year Gov. Perry had bomb-proof glass installed in the governor's mansion. He also directed that those who wish to tour the mansion call the day before and give their names and dates of birth, in order to be run through the Big Computer.

DPS is especially on its toes. The Special Crimes unit, 140 agents, which previously handled criminal cases, is now Texas' own anti-terror squad, geared up for an operational status second only to California or New York among the states. Texas has a long, porous border, DPS agents like to remind you. But the change in emphasis from crime to terror isn't without sacrifice. Jobs that Special Crimes used to do, like serving "blue warrants" – busting probationers and parolees who have violated terms of release – are now falling into a void, according to Col. Davis.

For a variety of reasons the primary focus is on security at the Capitol. Troopers there report recent unmistakable signs of unrest – specifically that they've been taking verbal abuse from university students on bicycles riding from campus through the state government complex. "This is Austin," shrugged one DPS sergeant, as if he were talking about the Sunni Triangle or Fallujah.

This city has a well-known social conscience, but it's also the ultimate me-town, and it seems unlikely that many Austinites would go to the barricades over four more years of W. It's hard to believe that anyone in Austin would take time off from training for the next triathlon, rolling the next spliff, or cutting that first CD, to overthrow the government. In fact, if W loses there might be even worse trouble, with the action more likely to resemble Mardi Gras – bared breasts and heavy drinking, "Libs Gone Wild."

There may be another dynamic at work in the ass-tightening downtown as well. The particular concern is not security per se – not in the common sense of the word. It's more job security.

Since 9/11, for example, the Austin police department has allowed no tours of the main police station, located just a few blocks east of the Capitol. Certainly the police chief may really be concerned about a bombing or an attack by terrorists. But maybe he also worries because his department has been under a different kind of attack – criticism for shooting dark-skinned people, not in Iraq but on the east side of town. Could it be that the police don't want the public seeing what goes on inside? It's just a thought.

Recently, even before 9/11, a security pattern had been established in official Austin. During the last two governors' inaugurations, for example, dozens of undercover Rangers and Special Crimes agents infiltrated the crowd. At Y2K, another example, then chairman of the Public Safety Commission, Jim Francis (also, by the way, W's main moneyman, creator of the Pioneer class of Republican political contributor) spent the evening with Gov. Bush in case state troopers had to be called out, if whatever didn't happen had happened.

This time, authority is technically in the hands of chair McHugh, a labor lawyer by profession – not pro-labor, the other side of the table – a partner in Bracewell & Patterson, the president's private law firm. This time around, McHugh may be hanging with Gov. Perry on election night, or at least in close contact with him.

Luckily, in recent years, the Department of Public Safety has had a good reputation for restraint in use of force. The initial motto of the department is "Courtesy" ("Service, Protection"), which is taken very seriously by the state police administration, and the troopers themselves prefer to talk with you before, well, they have to shoot you. This decision – whether to open fire in Austin, with rubber bullets or the real thing – is as likely to be made in D.C. as in Texas, at least until the election is over. After November, the federal government may just go ahead and declare open season on liberals.

In the case of the governor's mansion, it's interesting that the new security precautions, limiting access, coincided exactly with reported strains in Rick Perry's home life. The new restricted access may be related in part to personality as well as security. Gov. Perry, in his relatively short tenure, has already been through two managers for the mansion, while the previous holder of that position lasted 17 years. Maybe it's simply not as easy a household to run under this governor as when Ann Richards and, later, W lived there.

In any case, given the governor's recent approval ratings, Rick Perry may have more to fear from tar and feathers than from dynamite. 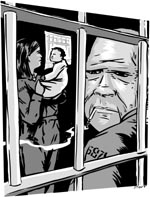