E-Voting in the Hot Box

Activists meet at the Capitol to address cybervoting threats to democracy 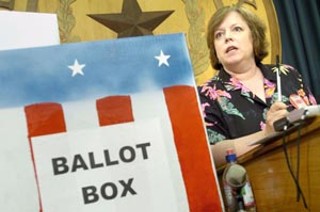 In the Chronicle's first major feature on electronic voting earlier this year ("How Safe Is Your E-Vote?" Feb. 20), we wrote that "concern about [electronic] voting has barely coalesced into a movement in Austin." Take note: The movement has arrived.

An announced press conference at the Capitol Tuesday turned into an activist pep rally, with the House Speaker's Committee Room jammed full of citizens, spilling out into the hallway and noisily worried about the security of the systems on which millions of Americans will cast ballots in November. The assembled activists and elected officials (including state Reps. Eddie Rodriguez and Lon Burnam and Austin Mayor Pro Tem Jackie Goodman) called on Texas Secretary of State Geoffrey S. Connor to require that all electronic voting systems print out a paper version of a cast ballot that can be verified by the voter before being deposited into a ballot box.

Much of the interest was due to the presence of Bev Harris, the author/activist who has done more than anyone else to draw attention to the flaws of trusting electronic systems over good, old-fashioned pencil and paper. Harris is touring the country promoting the book that made her name, Black Box Voting, as well as doing research for a new one, Black Box Shuffle.

Harris said she and her fellow activists in the organization, also named Black Box Voting, have uncovered evidence that either e-voting machine companies or public officials around the nation want to intentionally misconstrue any law requiring a "paper trail" to require only a cryptographically protected printout of voting tallies that wouldn't necessarily be auditable or usable in a recount. "Be careful. Your legislators will say, 'Oh, don't worry about it, we'll define [what constitutes a paper ballot] later.' No. It's a ballot, not a trail.

"Another thing we've uncovered," Harris said, is "written intent to eliminate any polling place printout. They want to get the optical scan systems and the touch screens to only be counted in one central location. Bad idea."

Harris also decried moves this week by the Bush administration to develop a plan for postponing elections in the event of an election-day terrorist attack. "We gotta nip that in the bud. You do not talk about canceling and postponing elections. You talk about 'Plan B.' ... Anybody who wants to talk about canceling elections needs to be replaced. Here's a Plan B: paper, pencils, day off to count the votes. ... We've never canceled, even in the Civil War and World War II. I don't know why we're talking about it now."

Glenn Smith of DriveDemocracy.org, a Texas-based group affiliated with MoveOn.org, tried to convey the urgency of protecting the accuracy of voting: "With our ballot, we join our fellow citizens in renewing our vows as full members of a vibrant democracy. In a political and cultural sense, the ballot is sacred. There is a lot of hoo-hah today about protecting the sanctity of marriage. The sanctity of ballot, however, is destroyed when one citizen is barred from voting or one ballot is left uncounted."

Smith urged activists not to demonize the vendors, saying instead, "We need to lean on the election officers, like the secretary of state and local election officials who are making the decision in certifying the machines. They are subject to political pressure and they can put the pressure on the companies to do the right thing. ... [The companies] are trying to meet a need that is given to them by some public and elected officials," Smith concluded.

Harris herself said that it would be a mistake to portray e-voting as a Republican plot to steal elections, as some activists have. "It isn't a partisan issue. You need to look at it like this, there's three parties: the Republicans, the Democrats, and the corrupt. The corrupt draws from anywhere they want to draw."