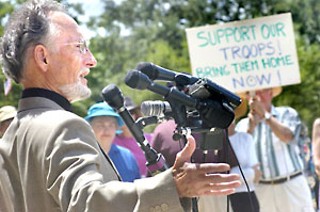 Lt. Col. James C. Berbiglia, a retired military chaplain and Vietnam veteran, joined other veterans at the Capitol Wednesday to speak out against the Iraq War. Other speakers included Army Capt. David Harris, who said, "This is ridiculous. We know the president lied to us. It's time to bring home all the soldiers from Iraq." (Photo By John Anderson)

Quote of the Week: "I hope they realize it's a volunteer job." – Travis Co. Judge Sam Biscoe, after more than 50 people applied for (hot) seats on the new hospital district board. See p.20.

Speaking of hot seats, the 23-member CAMPO board will be on them Monday night, as they vote to approve – or not – the controversial $2.2 billion regional toll road plan. See p.18.

Darn the luck for Lowe's! Now three district judges have handed the big-box retailer setbacks at the courthouse; officially, its controversial Brodie Lane project remains in limbo until a lawsuit challenging the deal goes to trial this fall. See p.22.

And speaking of limbo, barely a month after breaking ground, the Austin Community College South Austin Campus will need to be completely redesigned and delayed – reviving calls from the faculty to kill the project. See p.20.

The city has asked for a "voluntary ban" on the use of coal tar parking sealants within Austin while it continues to study whether these products cause toxic pollution of local waterways – including, famously, Barton Creek.

Work is halted again on Lick Creek, as the West Cypress Hills development was hit with yet another stop-work order on Tuesday. See p.21.

Gov. Rick Perry, despite getting all tough with Child Protective Services (see p.23) and other "heroic" measures, still had to endure use of the "I" word – impeachment – in his presence this week. See "Capitol Chronicle," p.16.

Maybe Perry would have an easier ride if his daddy had worked in a mill, like VP-wannabe John Edwards. But then again, Edwards – a darling of Texas Democrats – is a greedy trahl lawyer, so that would never do. See p.17.

The city's slow-and-not-always-steady efforts to re-engineer Austin's historic preservation program have entered another phase, with the release of staff-recommended changes to city code. Amid worries about the cost of historic zoning – and the tax abatements that come with it – and a series of controversial owner-opposed, neighbor-supported H-zoning cases, the City Council convened a task force to tackle the issue last fall. The staff revisions to current code incorporate some, but not all, of the task force's recommendations. The new rules would include a slightly less generous tax abatement, a clear-cut process for creating local historic districts, some tax incentives for rehabilitating properties in those districts (especially those owned by or housing low-income citizens), stricter criteria for earning a historic designation, and a streamlined review process by the Historic Landmark Commission. Details can be found at the city Web site, www.cityofaustin.org/development/codeamend.htm. – M.C.M.

In his ongoing attempt to build a bridge to the mid-20th century, AISD Superintendent Pat Forgione announced a districtwide employee dress code last week, on the heels of an earlier dress code aimed at students. The code mandates that dresses be of "an acceptable length," and bans "halters, tank tops," and similarly "revealing/provocative" clothing. Principals will determine if they are "provoked" by teachers' wardrobes. For male teachers, shirttails must be tucked, jeans are frowned upon, hair shall be "neatly trimmed and well-groomed," and staff are otherwise directed to dress "in a professional manner" – a professional wardrobe allowance is not addressed. Forgione declared that the new rules will allow AISD staff "to serve as positive role models for our students, by exemplifying a respect for learning; the appropriate standards of professional appearance; and conveying community values about proper grooming and hygiene." Forgione said that July will serve as "a period of review, where fine-tuning the dress code is welcome." – Michael King

The Austin Police Department on June 30 signed a memorandum of understanding with the federal Bureau of Alcohol, Tobacco, Firearms and Explosives that will allow the APD to use the National Integrated Ballistics Identification Network computer system to help solve "violent firearms crimes." The computer system, which will be located in the department's new forensics center, will allow APD firearms examiners to enter images of bullets and casings collected at crime scenes into a database for comparison with evidence in other crimes across the state and nation. Austin will join 18 other Texas agencies currently using the ATF NIBIN system. – Jordan Smith

Hays Co. has followed Travis Co.'s lead by purchasing 275 eSlate voting machines, pending approval from the secretary of state's office. Hays elections administrator Joyce Cowan expects the machines to be phased in slowly, with mostly educational demonstrations in the next couple of elections, and perhaps going "live" in a few city and school elections during 2005, before moving to full usage in 2006. Travis Co. has used the machines, produced by Austin's Hart InterCivic company, since the 2002 elections, with no major mishaps. The eSlate machines were involved in a major election snafu in California's Orange Co. earlier this year, but those errors were attributed to poorly trained election workers, not the machines themselves. Thus far, the eSlate system appears to have a better accuracy record than its major competitors in the electronic voting industry. Hart InterCivic is considered among the top four industry leaders. – Lee Nichols

Although the rumors still fly, the chances of another special session on public school finance appear increasingly remote as little progress has been made on the central deadlock: how to cut property taxes, add no new taxes, and still fund the schools. Last week Gov. Rick Perry told reporters in Tyler that he saw little prospect of calling a session before August, the practical deadline for getting potential constitutional amendments on the November ballot. The national GOP convention opens Aug. 30, creating another conflict for the party in power. In a sign of desperation or ecumenism, Republican Reps. Jerry Madden (Plano), Lois Kolkhorst (Brenham), and Ruben Hope (Conroe) invited "Democrat House Members" to take part in a members-only meeting today (Thursday) with invited experts "to move us forward toward building bipartisan support for a solution to the school funding crisis." – M.K.

Texas Democrats enthusiastically welcomed John Kerry's choice of Sen. John Edwards as his running mate on Tuesday. Edwards, a favorite of the state party since the primaries, delivered a rousing version of his populist "two Americas" speech at the state convention in Houston last month. State Chair Charles Soechting called Edwards "a great choice" and said he was "proud to be the first and only state chairman" to endorse the North Carolina senator. Added Soechting, "This Democratic ticket will give us all a fresh start – the nation, the world community, and those who have been left behind." The response from Republican quarters to the "personal injury trial lawyer" was not so enthusiastic. State Rep. Arlene Wohlgemuth, campaigning against incumbent U.S. Rep. Chet Edwards, D-Waco, in the re-redistricted CD 17, released a statement: "It appears that there will now be two liberals named Edwards running on the Democrat ticket this year. Just like Chet Edwards, John Edwards is a friend to personal injury trial lawyers and an enemy to those who wish to preserve our Second Amendment right to keep and bear arms." – M.K. Leaders of religious organizations across the country were visiting their U.S. senators' offices on Tuesday in support of federal legislation designed to help reduce global warming. Members of Texas Impact, a statewide grassroots religious network, appeared at the offices of Sens. Kay Bailey Hutchison and John Cornyn to deliver a letter signed by more than 60 clergymen, bishops, and other religious leaders in support of the McCain-Lieberman Climate Stewardship Act (S 139), aimed at reducing U.S. greenhouse gas emissions. The organization described global warming as an issue of "great moral urgency." For more info, see www.texasimpact.com. – M.K.

The U.S. Supreme Court on June 29 ruled that a 1998 law intended to shield children from Internet pornography likely violates the First Amendment. At issue in the case (Ashcroft v. ACLU), is the 1998 Child Online Protection Act, which made it illegal to knowingly post for "commercial purposes" Internet content that is "harmful to minors" – punishable by jail time and a hefty fine. The law allows defendants to show that they tried to restrict access by requiring use of a credit card, "adult personal identification number," or "other reasonable measures." The ACLU sued, arguing that COPA burdened protected speech when other, less intrusive measures – like Internet filters – are readily available to restrict access by minors. The civil-liberties group won every round, including the 5-4 decision by the Supremes. "Content-based prohibitions [on speech], enforced by severe criminal penalties, have the constant potential to be a repressive force in the lives and thoughts of free people," Justice Anthony Kennedy wrote for the majority. The case will now go back for further proceedings to determine whether COPA is the "least restrictive alternative available" to shelter children from online porn. – J.S.

Weed Watch: The National Organization for the Reform of Marijuana Laws is asking medical marijuana supporters to write to Congress to encourage passage of an amendment that would prohibit the U.S. Department of Justice from using taxpayer dollars to bust medical marijuana patients in the 11 states where medical use is legal. Sponsored by Rep. Maurice Hinchey (D-N.Y.) and Rep. Dana Rohrabacher (R-Calif.), the amendment is attached to the DOJ's annual appropriations bill. It would not prohibit the feds from arresting people for using, growing, or selling pot for recreational use. A similar amendment was defeated last year, by a vote of 273-152. For more info, go to www.norml.org. – J.S.

APD's North Central Area Command will undertake its second Operation Restore Hope neighborhood cleanup this Saturday, July 10, from 7:30-11:30am on Galewood Drive – just north of Highway 183 off Payton Gin Road. Want to help? To volunteer or for more info, call Kay Vargas at 834-7402. (For more on the NCAC and Operation Restore Hope, see "North Central Blues," May 7.)

Summer Skate Fest 2004 will be held Saturday, July 10, beginning at 1pm, at House Park Skate Park (1301 Shoal Creek). The event is being held in part to support efforts to build a public skateboarding park, which skating advocates say should have already been finished more than a year ago. City Manager Toby Futrell is scheduled to appear at the event at 3pm. The Skate Fest will also feature live music by ADA and Yes Definitely; cash and other prizes will be awarded, and giveaways will be offered by industry reps. For more info, call Tekgnar Skate Shop at 472-7343 or go to www.austinskateboards.com.

Travis Co. Constable Bruce Elfant will deputize volunteer voter registrars on Sat., July 10, 9am, at the Travis Co. Democratic Party office at 706 W. Martin Luther King #8. An RSVP is not required, but appreciated. The deputies will then participate in voter registration drives at events and locations around the county later that day. For more info, call 454-1392 or e-mail vote2004travis@aol.com.