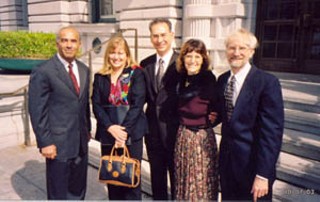 Med-marijuana users Diane Monson (l) and Angel Raich, shown with their lawyers, have a date this winter with the U.S. Supreme Court.

The latest assault on drug reformers has landed in Congress, courtesy of U.S. Rep. James Sensenbrenner, R-Wisconsin, whose new bill would beef up mandatory minimum sentences for folks convicted of selling marijuana to minors – a measure that rebuffs recent challenges to the infamous federal sentencing scheme. Sensenbrenner's HR 4547, titled "Defending America's Most Vulnerable: Safe Access to Drug Treatment and Child Protection Act of 2004," would amend the Controlled Substances Act to provide a minimum 10-year federal sentence for adults convicted of selling, or conspiring to sell, or attempting to sell or offer any quantity of marijuana to anyone under 18. Any subsequent conviction would net a life sentence – an extreme measure apparently needed to protect "children from drug traffickers," according to Sensenbrenner's charmingly draconian offering. But that's not all: The bill would also impose mandatory minimum sentences on anyone convicted of "manufacturing or distributing" marijuana in proximity to kid-friendly establishments such as video arcades and libraries. At press time, the bill had no co-sponsors.

Ironically, the debut of Sensenbrenner's bill coincided with a strong condemnation of the mandatory minimum sentence scheme, issued by the 400,000-member American Bar Association. Last year, the ABA leadership announced it would review and weigh in on man-mins after several federal judges publicly decried them – including Supreme Court Justice Anthony Kennedy, who told the ABA convention last summer that in "all too many cases" the sentencing scheme is simply "unjust." After nearly a year of study, it appears the ABA – whose membership includes prosecutors as well as defenders – has come to a similar conclusion, contained in a report that will be presented to the entire ABA membership in August for consideration.

The report says that mandatory minimums should be repealed, and the government should come up with "appropriate punishment without overreliance on incarceration as a criminal sanction" – and includes the novel suggestion that "lengthy periods of incarceration" be reserved for offenders who "pose the greatest danger to the community and who commit the most serious offenses." The timing of Sensenbrenner's bill – ever so slightly ahead of the ABA's clear condemnation – seems intentional, said Allen St. Pierre, executive director of the National Organization for the Reform of Marijuana Laws Foundation. "He simply wanted to be out ahead on this," St. Pierre said.

But what Sensenbrenner could not have anticipated were two court decisions – one from federal district court in Massachusetts and one from the U.S. Supreme Court – that also deal a heavy blow to the man-min scheme. In a memorandum commenting on a string of recent cases before the court, a federal judge in Boston concluded last week that mandatory minimums are unconstitutional because they tip the scales of justice in favor of prosecutors.

And in a June 24 decision (Blakely v. Washington), the Supremes ruled that juries, and not judges, must decide the facts of a case if those facts may result in a sentence harsher than called for by a plea agreement or sentencing scheme. According to drug reformers, the case could have a staggering effect in federal drug cases where judges, after conviction, decide a sentence solely on the amount of drugs involved, a fact not normally determined by the jury. "It was a whole week of sentencing reform," said St. Pierre, "the most extraordinary anti-drug-sentencing week."

In other legal news, on June 28 the Supremes announced they would hear the government's appeal in a medical marijuana case originally brought in California by two of the state's seriously ill medical marijuana patients. In that case the 9th U.S. Circuit Court of Appeals ruled last year that federal drug laws do not apply to sick people using marijuana as medicine in states where that is legal, as long as the procurement and use of the drug is noncommercial and remains intrastate. The government argued that plaintiffs Angel Raich and Diane Monson were procuring pot in violation of federal law – that obtaining the dope was, essentially, an economic act that affected interstate commerce. After losing on appeal, the feds lobbied for the Supremes to take the case. The court's last two decisions involving the commerce clause have weighed heavily in favor of states' rights – which encourages Raich and Monson's supporters. "This is a historic case," said David Michael, a member of the Raich-Monson legal team. "The court is going to consider whether [people] who possess and cultivate cannabis for their own personal [medical] use [are engaging in a] class of activities that Congress can't touch under its commerce clause powers." The court will hear arguments this winter.

But last week wasn't all joints and roses for the drug reform crowd, whose efforts in Nevada to have a conservative legalization question land on the state's November ballot have been dashed after initiative organizers – ahem – misplaced 6,000 ballot signatures. The signatures weren't turned in by the Silver State's filing deadline, meaning the question is almost certainly off the ballot until at least next year. That little smoker "moment" has cost the measure's national supporters, the Marijuana Policy Project (and their donors) over $500,000 in funding, sources said.