Austin @ Large: Mueller in the Middle

Whatever disasters City Hall hath wrought, the old airport isn't one of them 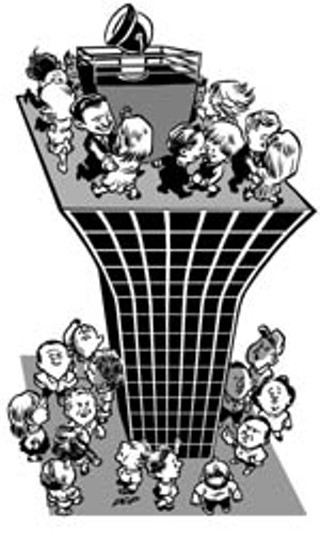 I just received an e-mail from local veteran activist Robert Singleton, currently affiliated with Keep the Land, the group that lobbied vociferously – but unsuccessfully – for the city to lease, rather than sell, the 711 acres of the old Robert Mueller Municipal Airport as it gets converted into a model urban village. After the City Council voted unanimously last month to move forward with Plan A – selling the Mueller land as part of its prospective partnership with San Francisco-based Catellus Development – Keep the Land has naturally had to retool, and has morphed into a broader-purpose Mueller watchdog group. (It helped, for example, create pressure to get the list of land uses to be allowed at Mueller's northwest corner changed by the Planning Commission, and thus, to rule out a Lowe's Home Center. That decision may very well be reversed by the City Council.)

But the e-mail, though promoting an event being organized by Keep the Land (to be held June 22 at 6:30pm at the AFL-CIO building downtown), is not specifically about Mueller. Or is it? "Keep the Land is gathering together local activists for a panel discussion on what in the system and practices of local government keeps it from working in the citizens' interest," Singleton writes. "We hope topics will not only include practical ones [lobbying the council, etc.] ... but also investigative topics that seek to identify elements in government that were built in to accommodate special interests, and discussing who benefits and how. ... [T]o come up with new recommendations to change the entrenched system that keeps defeating us no matter how many times we change the city council members."

Hmmm. Though I like and respect Robert Singleton, do I detect the taste of sour grapes here on the part of Keep the Land? In recent weeks we've seen further claims from the group that an incompetent and corrupt city is giving away the Mueller store – such as a letter to the Chronicle from the group's founder, Mary Lehmann, that concludes with the rather flat assertion "Greed won." We've also seen Keep the Land suggesting that Catellus (both in Austin and in its California home base) is not the unsullied white knight the city claims – though it also seems that the very fact that Catellus is big and successful has convinced some activists that there must be something wrong with them.

Whatever. Obviously, Lehmann, Singleton, and their allies not only can but should make their voices heard; that's how Austin works, and it doesn't do the Mueller project any favors for citizens to not pay attention, not care about the details, and thus, down the road, not really be invested in the outcome. But at the same time, if one is looking around Austin City Hall for case studies in government not working in the citizens' interest – which are not that hard to find – then Mueller is, in my considered opinion, a particularly bad example. Which, in fairness, may be why Keep the Land does not make the connection explicit. But it still bothers me, a lot, to see Mueller and – to be blunt – public corruption linked, even at a remove, in the public discourse. Enough for me to write a column about it.

Partly, I suppose I'm annoyed by the symptoms of Activist Syndrome – basically, being unable to take yes for an answer. Both in its process and its outcome so far, the Mueller redevelopment project has been an exception proving the rules that supposedly thwart the citizen interest at City Hall. Both local officials and community leaders – and now, yes, Catellus as well – have had plenty of chances over the past years and decades to cop out, cut sweetheart deals, and throw away Mueller's promise in order to make "special interests" happy and declare a quick victory. Instead, they have spent eight years working much harder than Austin usually does to create rather elaborate forms of community value. (Part of Keep the Land's lack of success, in my humble opinion, came from wandering in rather late in this process, determined to impose Lehmann's own goals for public land use, intriguing though some may be, onto a project that already had a quite well-defined purpose, thank you very much.)

It would have been much easier to let the state take over Mueller, or to swap it with Stratus Properties, or to hook up with a master developer and let them do the master plan. None of those things happened. If that isn't good enough for certain members of the activist set, then what is? Such absolutism may be an appropriate mindset for a philosopher, but not for people who are, supposedly, engaged in real-world political discourse and decision-making.

It's also important to remember that there would be no Mueller redevelopment project if it weren't for the dedicated, uncompensated efforts of a great many fairly typical Austinites; the neighborhoods around Mueller have carried this deal forward, as best they could, and over and around some fairly challenging obstacles. Obviously, they have a self-interest in ensuring a quality development at Mueller that doesn't threaten the quality of their own neighborhoods, but that's hardly unusual, let alone unethical.

As is also the case with the neighbors around UT who've crafted the Central Austin Combined Neighborhood Plan – who are now also confronting charges of "sweetheart deal" and "sellout" – the Mueller neighbors have distinguished themselves for years by not being parochial in the ways Austinites too often are. Since way back in the Eighties, before the airport's relocation was anything like a done deal, and consistently since it became an official city project in 1996, the neighbors have championed the broad civic goals of Mueller, from which all Central Texans can benefit.

The neighbors could have called for the airport to be built out from end to end with single-family homes just like the ones in Cherrywood or Windsor Park or Pecan Springs – y'know, "preserving neighborhood character," since as we know every Central Austin neighborhood is practically perfect in every way. Instead, the neighbors called for Mueller to break that mold – knowing full well that a successful urban village will also transform their own neighborhoods – out of a commitment to the needs of the city.

Reasonable people can disagree on whether Keep the Land's leasing strategy would have been a better way of achieving the goals of the Mueller project; I happen to disagree. The fact that Keep the Land loudly endorses the Mueller master plan is irrelevant, because the master plan itself is just a means to an end; if it has to be totally rewritten, then so be it. The goals are what matters.

Having tilted my own share of windmills at Eighth and Colorado, I can empathize with those who feel that alternatives to the now entrenched Mueller strategy – or a number of other city policies – have gotten short shrift from civic leaders in their zeal to get one or another deal done. But I think that's, at best, an incomplete picture of what's happened at Mueller over the years, and I'm unconvinced that there really are any better alternatives. I sincerely hope that Keep the Land has not decided that its own inability to similarly convince the city somehow proves that Mueller is an ethical failure or a disaster waiting to happen – and that a rare case in which Austin has done everything right, for years, is really all wrong because, well, that's just the way City Hall works.