The Elephants at Play 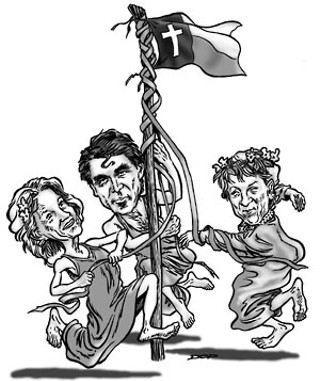 The big battle at last week's state Republican convention in San Antonio was supposed to be between Tina and Gina. State chair and Houston attorney Tina Benkiser faced a challenge from Gina Parker, a Waco/Austin attorney whom Benkiser narrowly defeated for interim chair a few months ago in a vote by the GOP's executive committee. Although the ideological differences between the two candidates appeared minuscule, the Parker campaign accused the Benkiser team (with incumbent Vice-Chair David Barton, also running for re-election) of insufficient ardor for "conservative" principles – reportedly, for example, Barton and Benkiser's predecessor Susan Weddington had once "apologized to an audience of black ministers about slavery." Parker, on the other hand, was accused of belonging to that lower order of the attorney species known as "trial lawyer" – to which she responded airily, "I have never filed a medical malpractice lawsuit."

Parker appeared to have gathered a shade more of the loony-right endorsements – Donald E. Wildmon of the American Family Association, Eagle Forum grande dame LaNeil Wright Spivy, lame-duck Supreme Court Justice Steven Wayne Smith, and a special appearance from defrocked Alabama Judge Roy Moore (presumably without Moses and the Bulrushers). Benkiser is more demure on the all-important Texas Big Hair Scale, and slightly more agreeable to the GOP's institutional leadership, always a bit uncomfortable with the unwashed Republican grassroots. Onlookers were predicting a potential floor fight – there were squads of T-shirted "Parker's Posse" all over the Henry B. González Convention Center – but in the end nothing dramatic materialized, and Benkiser gathered enough district pledges to convince Parker to concede, summarizing the race as nothing more than a dinner-table dispute among siblings.

That was pretty much it for fireworks. Delegates had to be content with ovations every few minutes for one or another unctuous display of religiosity or militarism – e.g., a retired judge peddling CDs of a lachrymose C&W ballad, "The Streets of Baghdad" – that came to serve as an overriding theme of the proceedings. Much of it had a desperate air, as if continuing to insist that D-Day and the conquest of Iraq were pretty much separate battles in the same campaign for "Freedom" would eventually make that wishful thinking come true. The only similarly audible enthusiasm was for declaring that "traditional marriage is a legal and moral commitment between a natural man and a natural woman" (standards for "natural" not further explained) – and supporting legislation "to make it a felony to issue a marriage license ... or for a civil official to perform a marriage ceremony for a same-sex couple." (Just in case some wise-guy gay trial lawyer contemplates an end run, a floor amendment also felonized civil unions.)

Convention chair and state Sen. Jane Nelson quoted Harry Truman (no audible booing) to the effect that a party platform is "a contract between the people and the candidate," a notion the elected officials present honored more in the breach than the observance. Most notorious was Gov. Rick Perry, who gave a rousing "pro-conservative, pro-family, pro-life, pro-business" oration and then stepped down to explain to reporters that his proposal to fund public education by means of casino-style slot machines – in direct violation of a couple of explicit platform provisions and oodles of moralistically negative floor-buzz – is in fact a "contraction of gambling" because it would magically replace hundreds of thousands of "eight-liners" (which can pay off in merchandise) with "only" 40,000 racetrack slots. Sen. Kay Bailey Hutchison turned up to denounce gambling as leading to moral decadence, but allowed that she continues to support limited reproductive rights until "viability" of the fetus, a position stoutly rejected by the platform, which insists at ponderous length on the inviolable right to life of all human genetic material from stem cell forward, to infinity and beyond.

Comptroller Carole Keeton Strayhorn delivered her usual machine-gun paean to George W. Bush, balanced budgets, "limited government and unlimited opportunity," followed by a few generic gibes at a state budget (no names mentioned) that radically underfunds public education and health care. Then, sounding very much like a candidate in search of a wedge issue, she declared her support for "initiative and referendum," that form of direct marketing so beloved of California public relations firms. Alas, I&R is firmly rejected by her party's platform, under the heading, "Preservation of Republican Form of Government."

On the Right Hand –

So much for the gospel of the pragmatists – all three coyly dancing around the GOP maypole for the 2006 election – in the party of True Believers. There are of course even more notorious GOP platform absurdities, including gun worship, anti-tax dogmatism, "American English," indignant snorts at all forms of environmentalism, thundering against hate crimes legislation, declarations that the U.S. is "a Christian nation," and so on. Hidden among these polemical excesses are more mundane additions, like ex post facto sanctions for "AWOL Legislators" (military acronym untranslated), and the demand that the Legislature immediately transfer the powers of the Travis Co. District Attorney's Public Integrity Unit (deemed insufficiently deferential to the current Republican hegemony) to "an impartial statewide elected judicial entity." Plenty of those available.

There are even a couple of mild surprises, including a dismissal of the governor's Trans Texas Corridor transportation scheme on suspicion of threatening private property, complaints about too much standardized testing (another provision prefers daily pledges and patriotic songs), and a rather contradictory item that supports "free trade" in general but counsels immediate withdrawal from the World Trade Organization and related agreements. (The United Nations in any form, of course, is beyond the pale, even while the party's D.C. champion desperately maneuvers for the UN to pretend to take Iraq off his hands before November.)

All in all, it was a festive occasion, replete with flag ties, flag shirts, flag hats, flag pants, flag jewelry, flag wind chimes – making the relentlessly flag-waving rhetoric from the podium seem, just perhaps, a little too much of a good thing. The torrent of commercialized red, white, and blue might make one wonder whether the delegates actually believe yet another platform provision they had duly ratified: "The Party views any form of desecration of the American flag as an outward act of disregard for our nation and its people and advocates penalties for such acts."

There's a fine line between desecration and idolatry, and the "party of Lincoln" crossed it at a gallop long ago.