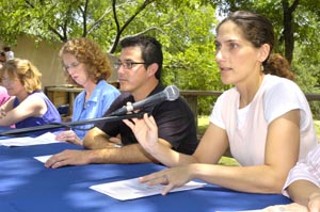 For health care choices at local hospitals, the pool of options for moms and babies keeps getting smaller. The company line for axing programs such as midwifery or lactation support services typically centers on budgetary constraints; but in truth, women's advocates say, these low-tech services cost little money to operate and can even save health care dollars in the long run because of their preventive benefits. The problem is, they don't make money, so out they go.

Breast-feeding support services are the most recent casualties. In a round of layoffs in late April, the Seton Healthcare Network eliminated the program at the city-owned Brackenridge Hospital (thus leaving the city in the lurch) and scaled down breastfeeding services at other Seton facilities. About a week later, South Austin Hospital, an affiliate of the St. David's HealthCare Partnership, slimmed down its lactation support program as well. No such services are available at the new Austin Women's Hospital, which the University of Texas Branch at Galveston leases and operates for the city on the fifth floor of Brackenridge.

Two lactation consultants who were pink-slipped in the Seton cuts, Dana Michaud and Laura Smith, organized a task force within days of the layoffs and brought on board doctors, nurses, and other professionals equally dismayed about Seton's decision. Last week, the task force launched a campaign to reinstate the services in hospitals and raise public awareness about the health benefits of breast-feeding – which range from preventing obesity and diabetes in children to reducing the risk of breast cancer in mothers. Contrary to popular belief, breast-feeding doesn't always come naturally to mothers and infants. Many times, says Michaud, mothers will give up on breast-feeding out of frustration and switch to baby formula – a decision made easier by the formula-filled gift package that hospitals routinely send home with new mothers. The industry keeps hospitals well stocked with free formula, with the idea that every mom with a new baby and a free sample is a prospective consumer. 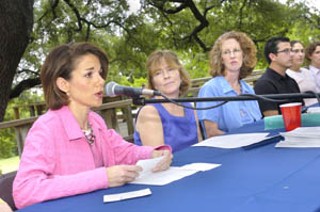 This is where consumer education comes into play, says Dr. Ari Brown, a pediatrician and task force member. "Breast milk is the most hypoallergenic thing you can feed your baby," said Brown, the co-author of Baby 411, a how-to book for parents during a baby's first year. "With formula, babies tend to be more susceptible to food allergies." On the down side, Brown added, "breast-feeding support is not a reimbursable service, so many hospitals view it as a luxury."

While Brown serves on a Seton committee that advises administrators on pediatric and obstetric matters, she said she and the other committee members didn't learn of the demise of the breast-feeding program until they read about it in the newspaper. "Unless I missed the memo, I was not aware that this would happen," she said. "We were all pretty surprised and very disappointed."

Dr. Susan Landers, an Austin neonatologist, vowed that the task force and other doctors would keep pushing the issue until the programs are fully reinstated at Seton hospitals. "I know they were making some tough decisions," she said, "but from our point of view, a decision to cut a preventive health care program seems sort of out of touch." Dr. Joseph Elizondo, a pediatric resident at Brackenridge, echoed those thoughts. "These [lactation consultants] are extremely experienced and knowledgeable. They're such an integral part of the care that we provide," he said, "particularly to the lower-income population."

For now, Seton is transitioning much of the lactation support work to the nursing staff – a plan that doesn't have a lot of support among nurses, who already carry a full load of patient responsibilities. "We have a lot of time constraints, but we probably could make the time," said Abby Treece, a registered nurse. "But what we don't have is the experience." The hours of lactation training that nurses get, she added, are but a fraction of what lactation consultants have before they can even become board certified.

City health officials, like everyone else, were caught completely off guard by Seton's decision to ax the Brackenridge program. "We were notified on the same day they announced the layoffs," said Shannon Jones, assistant director of public health. For now, the city is relying on the resources of the Texas Department of Health to assist in breast-feeding support services. But to get the program reinstated at Brackenridge, Jones says, the WIC "peer counselors" need the supervision of certified lactation consultants. Jones said he and Michaud, one of the laid-off Brack consultants, are in discussions on that score. Still to be decided is whether the consultants would return to Brack on a volunteer basis for now, or whether TDH would be able to part with some funding to help pay for the services.

The city has been less determined about reinstating midwifery services at Brackenridge, however, and was reluctant to press the issue during UTMB negotiations on the Women's Hospital. Amy Chamberlain, who heads the local chapter of Texans for Midwifery, sees an unfortunate trend taking shape. "For the last two years, real support for healthy mothers and babies has been chipped away in Austin," she said. "It is shortsighted to hinder women's access to midwifery care, to prenatal care, and to lactation support for breast-feeding. These services not only promote the future health of the community, they avoid taxing our health care system later."