If Texas can't kill the insane, where will the madness end? 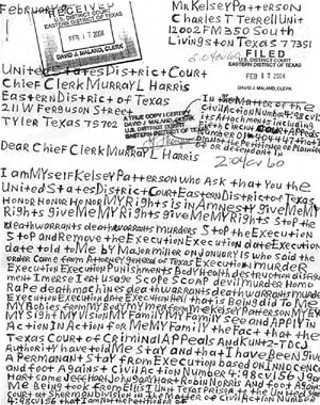 Excerpt of a letter from Kelsey Patterson

Thanks to Gov. Rick Perry, Texans can rest a little easier knowing we have been protected, once and for all, from the future dangerousness of Kelsey Patterson, the paranoid schizophrenic who went to his death in Huntsville last week despite his belief that he had been granted an amnesty by Satan himself. That was what he had told his attorney Gary Hart several years ago in refusing to speak to him any more, on the grounds that Hart was insufficiently versed in "Hell Law." Hart might have replied that Texas law is certainly close enough – a conclusion drearily reinforced by the final days of Patterson's dismal journey on this earth.

It was not particularly remarkable that the state had deemed it necessary to execute a madman – we have done so before, and will certainly do so again. But virtually unprecedented in Patterson's case was the recommendation of the state Board of Pardons and Paroles, which voted 5-to-1 to ask the governor for a commutation, or at least a 120-day reprieve. The BPP, which does not actually meet to discuss cases and typically votes via fax, conventionally maintains a stolid silence on the reasons for its decisions, but afterward one member – former Harris Co. prosecutor Linda Garcia – acknowledged that she had recommended commutation because of "concerns about some mental health issues that were present." That is, as even Anderson Co. District Attorney Doug Lowe – the prosecutor who secured Patterson's death sentence – admitted, Patterson is indeed a schizophrenic. "But that doesn't mean a person isn't accountable for what they do," Lowe said.

Unfortunately, that's exactly what it means, something even a prosecutor should be expected to know.

Cruel and Quite Human

The governor of Texas was unmoved by the board's recommendation. That too was no surprise, especially Rick Perry's reasoning that numerous courts had found "no legal bar" to executing Patterson. That's long been the bipartisan refrain of Texas governors, who have willfully misconstrued the explicit meaning of the clemency process, which by definition is supposed to take into account extralegal mitigating circumstances affecting a capital prosecution. That's why the governor is given power that ordinarily resides solely in the judicial branch. The U.S. Supreme Court has finally forced Texas to consider mental retardation as a mitigating factor, but it will probably take many more executions and federal decisions to force the state to consider mental illness.

On the contrary, Perry appeared to consider Patterson's schizophrenia an argument in favor of execution. "Texas has no life without parole sentencing option," the governor said, "and no one can guarantee this defendant would never be freed to commit other crimes were his sentence commuted. In the interest of justice and public safety, I am denying the defendant's request for clemency and a stay." Yet even under the standard 40-year sentence, Patterson would not have been eligible for (unlikely) parole until he was 78.

Perry's intransigence would be easier to understand if he had lifted a finger to support life-without-parole legislation, narrowly defeated in the 2001 Legislature. As is the case with so many issues, his office says, "He's always encouraged the Legislature that that debate would be an important one to have." Asked if the governor's decision overruling his own parole board appointees reflects the position that mental illness cannot be a mitigating factor in capital cases, spokesman Robert Black said, "The governor believes the process in place has worked. The Board of Pardons and Paroles made its recommendation – he just disagreed with that recommendation. It's part of the process."

It's worth remembering that Patterson's mind had broken down long before the murder in Palestine of Louis Oates and Dorothy Harris, and that crime in fact turned out to be his admission ticket into the state's standard treatment program for mental illness: permanent incarceration. He had been diagnosed with schizophrenia a decade before the murders, but when his family tried to get him help – even in the weeks before the murders – they were told that unless he turned violent, there was nothing the authorities could do. In that light, Patterson's crime might be considered a sort of extreme self-therapy. Usually, of course, the mentally ill are much more of a danger to themselves than others, and much more likely to be victims of crime than perpetrators.

Welcome to the Slaughterhouse

Patterson's case is hardly unique. Larry Robison, executed in January 2000, and James Colburn, executed in March 2003, were both long-diagnosed schizophrenics when they committed their crimes, and the families of each had sought state help, in vain. Scott Panetti, who received a stay in February, will most likely be the next schizophrenic with a similar history to be executed by the state of Texas. It's even arguable that for inmates like Patterson or Panetti in the Texas prison system, a death sentence is more merciful than the alternative – it represents more attention and treatment than they're likely to get otherwise.

Under current historical circumstances, it might seem quixotic to object to the retail execution of a handful of hapless madmen by the state of Texas, when the national government is freely exercising its power to invade, make war, hold hostage, starve, torture, or simply slaughter thousands of people under flimsily manufactured imperial pretenses and romantically neo-fascist slogans like "shock and awe." But it is the peculiar logic of capital punishment that, arbitrary and random and grotesquely administered as it is, upon it rests the entire authority of the state over life and death. Every time the state of Texas plucks one sane or insane person from among us, straps him down, and injects the poison, it restates the government's claim to absolute, idolatrous, godlike power over human life.

And each time, unless we do what we can to raise our voices against that power, we all wash our hands in the blood.