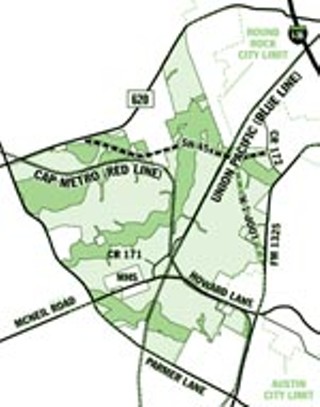 Once upon a time, there was a place called "between Austin and Round Rock." What's left of that place is poised to disappear – at least officially – in a couple of weeks, as the city of Austin moves forward with plans to annex the 6,000-plus-acre Robinson Ranch, a roughly diamond-shaped patch of land between Parmer Lane, FM 1325, and RR 620. The City Council is scheduled to approve, on first reading, limited-purpose annexation of Robinson Ranch at its June 10 meeting.

Right now, the ranch – still controlled by the Robinson family, which has owned it for more than a century – is mostly undeveloped. But if the vision that's guiding the Robinson Ranch annexation comes to fruition, that will change in a very big way. The ranch sits at the interchange – McNeil Junction – of the Union Pacific and Capital Metro freight rail lines, both of which have been proposed for conversion to passenger commuter rail. Moreover, two of the toll-road projects already under way – SH 45 North and the MoPac extension – likewise run right through the ranch.

So, rather than sit and watch Robinson Ranch fill up with low-density sprawl over the coming decades, the city, other regional leaders, and the family have gotten proactive. Along with annexation, the City Council is also scheduled to approve preliminary zoning for Robinson Ranch as a planned-unit development; the PUD calls for mixed-use, New Urbanist, transit-oriented development that equals – and in some cases exceeds – the densities called for in the Mueller master plan, the University Neighborhood Overlay for West Campus, and other infill efforts currently on the table. The city would proceed with full-purpose annexation as Robinson Ranch is built out, which may take 25 years, during which the project could make Austin the largest city (in both population and land area) in Williamson County. The city Zoning and Platting Commission – a little overwhelmed by the scope and size of the project – is currently reviewing the Robinson Ranch PUD case and expects to render its recommendation next week.

It's worth noting that, unlike familiar sagas of land speculation both in the urban core and on the fringe, the Robinsons themselves are not pushing this deal along. "Robinson is not a land developer, has no current plans to develop Robinson Ranch, and presently has no intention of changing the current land uses on Robinson Ranch," reads the proposed annexation and development agreement between the city and the family. "However, as the areas surrounding Robinson Ranch continue to urbanize, the parties recognize that Robinson Ranch will also become more urbanized and lose its character as a working ranch."

According to the city, which initiated formal negotiations with the Robinsons, the benefits of the deal to the family include both certainty and flexibility. Rather than risk being split up between numerous jurisdictions, the ranch will lie entirely within Austin's purview, and the agreement locks in current city development regs for at least 15 years. At the same time, the PUD agreement gives the Robinsons, or future owner/developers of parts of the ranch, a wide variety of potential uses and development rights, from which they can choose those "that make the most sense and are the most attractive to the market at the time." Other than the 30% or so of the ranch that is to be preserved as open space – mostly in wider-than-usual greenbelts along the three major creeks and several minor creeks that cross Robinson Ranch – the entire property will be zoned, within the PUD, for either "mixed-use" or "transit-oriented" development. The latter would be more intense, requiring that projects "emphasize a pedestrian-oriented environment and reinforce the use of public transportation."

It's not just the Robinsons and City Hall who've realized the potential of the ranch. Last year, the area around McNeil Junction was one of the community "test sites" selected by Envision Central Texas to bring that regional planning project's discussions about density and urbanization down to ground level. The resulting ECT concept for McNeil Junction looks rather similar to the master plan for Mueller, except without any single-family homes. Instead, medium- and high-density residential and mixed-use projects would span the acreage between the existing McNeil High School and a major transit hub and station at the junction itself. A fully commercial "employment area" would lie to the east, closer to MoPac.

The ECT vision is just an idea, but it's consistent with that project's larger regional vision of a future Central Texas that accommodates its population and economic growth within its existing land-use footprint. A more specific, and ambitious, vision for Robinson Ranch has been advocated, most notably by state Rep. Mike Krusee, whose district includes the ranch. "My vision is for tens of thousands of biomedical and biotech jobs centered around a medical school and teaching hospitals which foster private sector development," Krusee says. The powerful GOP rep – who, by all accounts, has embraced New Urbanism with the zeal of a convert – says he's been working with Austin city leaders to allow "many ... dense mixed-use developments" at the ranch, not only to create more responsible land use as urged by ECT and others, but to secure future prosperity for the region's anchor city. "Robinson Ranch is the future tax base for Austin," Krusee says. "Without its successful development, Austin runs into serious budget problems." The city's term sheet for the Robinson Ranch deal anticipates the development, if fully realized, bringing $229 million in net income to the city general fund over 25 years. 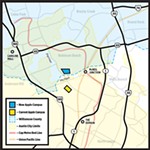