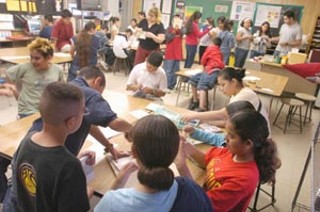 Austin ISD budget discussions won't even begin for another month, but already interest groups are mobilizing to snag a bigger chunk of the district's scarce funds. Most vocal so far are the "special areas" teachers at AISD elementary schools – the music, P.E., and art instructors who barely managed to keep their programs alive in last year's budgetary bloodbath.

Faced with massive community opposition to original proposals to cut special areas entirely, the district eliminated about 60 positions and saddled the remaining teachers with larger classes; single teachers are now responsible for classes in multiple elementaries. Now, after a year of bouncing between campuses to teach classes of 30 kids or more, many are ready to declare the experiment a failure.

"It's really crowded," said Gwyn Cramer, who teaches kindergarten art at both the Odom and Becker campuses in South Austin. "I can't get around to give all the kids individual attention. The incident rates go up. I had one boy cut another boy's hair with scissors, and I didn't even see it."

Concerns go beyond the safety implications raised by 30 5-year-olds with scissors in a small portable building. Both special-needs and gifted students are mixed in with regular classes. Additional setup and clean-up time means that messier projects, like clay, are simply impossible in the 45-minute class periods. Kids get fewer turns in games and on equipment in P.E. classes, and less access to instruments in music classes. Teachers spend more time grading and, for those whose assignments are now split between schools, traveling. Afterschool programs are dropped because teachers are too stressed and frustrated to continue them.

Some teachers are asking to be reassigned out of special areas; others are giving up on AISD entirely. "By Christmas, I was really frustrated," said Cramer, who next year will be teaching in Missouri. "I started looking around to see what else was out there, and I saw that the situation in my home state was much better."

Some schools have found ways to keep their class sizes reasonable. At Bryker Woods, the school PTA raised $27,000 to offset cuts made to all three special areas. To do so, parents "pledged" $65 per student – some parents gave extra, donating up to $1,000 – and the special-areas departments packed their calendars with fundraisers. However, art teacher Sue Flores worries that parents will tire of the constant passing of the hat. "We've gotten quite a bit of support, but I don't think parents will tolerate this in the long run," she said. "This is a very short-term solution."

Plus, not every school can bring in thousands through fundraisers, which raises concerns about equity. "We feel these cuts much more than schools in well-off neighborhoods," Zavala parent Inez Montoya told AISD trustees at a recent meeting. "The families in our [East Austin] neighborhood are for the most part poor, so the schools are the only place our children can take these classes." Less well-off schools do have options; next year Zavala will also restore cuts to its art program, using federal Title I funds for poorer schools. (The music and P.E. teachers, however, will have to continue teaching oversized classes.) Still, this is roughly $9,000 that Zavala won't be able to spend on instructional materials and staff development, as it otherwise would.

But these piecemeal solutions don't change teachers' desire that the district once again make special-areas classes the same size as other classes. While the budget process has barely begun – Superintendent Pat Forgione's budget task force will make its first report to the board in mid-June – already parents and teachers are filling the trustees' in-boxes and the public comment period at board meetings.

But trustees warn that other demands may push special areas to the back of the list – most notably, AISD teachers' current campaign for better salaries. The board has spent the past month studying different options for compensation packages, and while trustee Ave Wahrmund expressed sympathy for the special-areas teachers' plight, she warned that the districtwide issue of teacher pay may end up taking precedence. "It's always a question of prioritizing," she said. "We'll just have to look at it and see what we can afford. Compensation will be pretty high on our list."

Of course, special-areas teachers plan to keep raising a fuss, saying it's not just themselves they're worried about. "The big losers are the kids, who don't get to discover the joy of what music and art-making can be," said Zavala teacher Deborah McLouth.