Despite plenty of reasons to go slow, the agency – and its developer friends – are in a big hurry 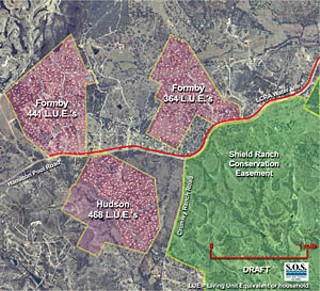 This map, created by the Save Our Springs Alliance, demonstrates what can be expected in "living unit equivalents" or households if the LCRA puts a water pipeline along Hamilton Pool Road.

Environmentalists and residents seeking to delay action on a proposed water pipeline in the Barton Springs watershed may have an unlikely ally on the sidelines – the Texas Department of Transportation.

To both sides' dismay, virtually no formal traffic analysis has been conducted as part of a proposal that calls for 1,300 new homes and a 7-mile pipeline that the Lower Colorado River Authority would build along Hamilton Pool Road (FM 3238), a two-lane roadway that winds through some of the Hill Country's fine, yet environmentally fragile landscapes.

TxDOT spokesman John Hurt is already envisioning the twin projects' disastrous impact on this narrow farm-to-market road, which he says is unable to support the addition of some 3,000 cars making multiple vehicle trips per day. The only improvements for the road on TxDOT's radar for now, he said, involve placing bars over drainage areas along the road.

Beyond that, the long-range transportation plan of the Capital Area Metropolitan Planning Organization only calls for converting the road, by 2025, from a two-lane minor arterial to a two-lane major arterial – which could, for example, include creating a center turn lane, Hurt said. Are those improvements sufficient to sustain the anticipated influx of traffic? "In my opinion? No," he said. "It would be difficult."

Hurt is already predicting what would come next if the project proceeds: Angry demands for widening the road, installing traffic signals, and building new roads – to the tune of about $1 million per mile in taxpayer dollars. "This is a cycle that we go through with nearly every rural area, and it's driving us batty," Hurt said. "We don't control the development – it's up to the cities and counties to stay the hand of developers."

The LCRA has spent the last 18 months in quiet negotiations with three Hamilton Pool Road landowners who want to turn their adjoining properties into a new Hill Country subdivision. The three tracts comprise 1,400 acres between State Highway 71 and Ranch Road 12, about six miles from the cool waters of Hamilton Pool itself, a Central Texas landmark.

Local environmental leaders were brought in on the discussions at some point during the negotiations, but neighboring landowners – many of whom inherited their land from their ancestors – say they were shut out of the process entirely. Most of them didn't learn of the proposal until a few days before an April 21 hearing. They have since organized as the Hamilton Pool Road Scenic Corridor Coalition and hired Lauren Ross, a widely respected environmental engineer. In a 10-page report released Monday, Ross outlined a number of environmental hazards associated with the level of the development that is proposed.

A vote on the pipeline proposal is expected at the LCRA board's May 19 meeting at Canyon of the Eagles Nature Park in Burnet. Environmentalists and residents have joined in asking the LCRA to postpone the vote until the completion of ongoing work on a regional plan, a multi-jurisdictional endeavor to further water quality protection in the Barton Springs watershed in southwest Travis and northern Hays counties.

Although the LCRA is considering taking action that could adversely influence traffic on a roadway ill-equipped to handle the extra load, LCRA officials have consistently sidestepped the issue, explaining that transportation matters are not part of the LCRA's purview. The pipeline situation, regional planning advocates say, is but one example of growth struggles unfolding in many communities west of Austin, where elected officials see tax dollars – not planning nightmares – in bigger-than-ever development proposals. Interestingly, the LCRA is one of the major players and big financial backers of the regional planning effort; the agency had initially vowed to hold off on building any new infrastructure in western Travis Co. until a roadmap was in place. Now, LCRA general manager Joe Beal says it's time to move forward on the pipeline project because the regional planning process has already undergone a series of starts and stops over the last four years, and there's no telling when or if stakeholders will be able to agree on a plan.

But as environmentalist Robin Rather pointed out, funding for the plan only became available last year, and that windfall added considerable momentum to the process: A Corpus Christi-based consulting firm, Naismith Engineering Inc., has been hired, and Hays Co. resident Terry Tull just recently stepped in as executive director of the regional planning effort, charged with nudging the planning process through to its completion. Tull, who is not taking an official stand on the proposed pipeline, estimates a 10-month timeline for developing a set of standards that everyone, or at least a majority of the stakeholders, can agree on.

Meanwhile, the LCRA is propelling its $5 million pipeline proposal forward in an area where the city of Austin has largely stopped building infrastructure – for the very reason that environmentalists oppose the project. If the pipeline wins the approval of the LCRA board, the owner-developers will then seek the same favorable outcome from Travis Co.

The agency and the three owner-developers have made a lot of hay out of the developers' commitment to adhere to water quality control guidelines recommended by the U.S. Fish & Wildlife Service. Yet, as Save Our Springs Alliance spokesman Colin Clark noted, those guidelines don't consider wastewater pollution or off-site pollution from traffic. Nor do they consider the additional subdivisions, and the demand for retail services, new schools, and new roads that will undoubtedly follow.