Nukes, Lies, and the Daily

Tweet
print
write a letter
Regular Chronicle readers may have smelled a whiff of déjà vu on Sunday when they came across an op-ed by William M. Adler in the "Insight" section of the Statesman. In a piece reprinted from The Washington Post, under the headline "PR ghosts come back to haunt professors," Adler recounted how he had read a March 4 Statesman op-ed by UT nuclear engineering professor Sheldon Landsberger, found it strikingly similar – at moments, identical – to numerous opinion pieces published in other newspapers, and eventually discovered a nationwide pattern leading back to the Potomac Communications Group – a public relations firm for the nuclear power industry and the actual source of numerous such canned "expert" essays.

Adler also wrote that Landsberger subsequently "apologized" to Statesman readers for his misrepresentation in "failing to note that [my signed article] was not written by me." In The Washington Post, the apology made sense because, as Adler recalled there, "Fascinated by all of this [refried advertising], I phoned the news editor at the weekly Austin Chronicle, who told me to lace up my roller skates and get going on a story – which it published April 16." Realizing Adler's Chronicle piece – "Will Shill for Nukes" – was in the works, Landsberger confessed his sins to the dean of engineering, who insisted he write a letter to the Statesman editor; it was published on April 13.

That sentence regarding the Chronicle mysteriously (or not so) didn't make the Sunday Statesman, so non-Chronicle readers were left to wonder how it was that Landsberger was moved to his repentance – via the circuitous route of the Statesman op-ed page, the Statesman letters page, The Washington Post op-ed page, and once again, the Statesman op-ed page. Never mind – thanks to Bill Adler's diligence, at least now Landsberger is also on the Statesman record for the "five to 10" such received (and unrepented) nuke-industry opinions over the last five years on which he slapped his name, his reputation, and that of the University of Texas.

Not so Dale Klein, former UT vice-chancellor and nuclear weapons expert, and also among those identified by Adler (in the Chronicle) as publishing under their own names (and scholarly affiliations) promotional scripts actually authored by the nuke industry. Klein – whose wife Rebecca is running for Congress to unseat Austin Rep. Lloyd Doggett – is currently employed by Secretary of Defense Donald Rumsfeld, and in that capacity says he is diligently continuing to search for "weapons of mass destruction" in Iraq. Or so he told an Austin audience last week, as duly reported in the Statesman, adding that he has no doubt he will find "thousands of chemical weapons and a few biological weapons." (Klein has dropped the Bush administration insistence on the presence of Iraqi nuclear weapons, but hey, "It's a vast country.")

In other news last week, UT adopted an "honor code," as follows: "The core values of the University of Texas at Austin are learning, discovery, freedom, leadership, individual opportunity and responsibility. Each member of the university is expected to uphold these values through integrity, honesty, trust, fairness and respect toward peers and community." 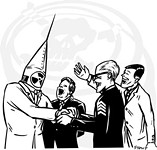