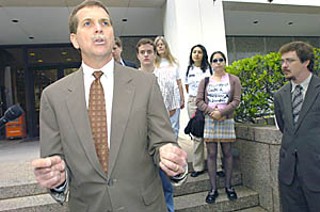 State Rep. Lon Burnam of Fort Worth speaks out against UT's bid for control of the Los Alamos National Laboratory.

Is the UT System learning to love the bomb? In February, the UT Board of Regents announced a possible bid for management of New Mexico's Los Alamos National Laboratory, best known as the birthplace of the A-bomb and more recently for a litany of security mishaps, production of new nuclear bombs, and research into low-yield "mini-nukes."

For over 60 years the University of California System has managed Los Alamos under an arrangement with what is now the U.S. Department of Energy. But provoked by what he calls "systemic management failure" at Los Alamos that he blames on UC, Secretary of Energy Spencer Abraham decided last year to open Los Alamos to competitive bidding. Other universities and private defense companies can smell blood, and many UT leaders believe the university is particularly well positioned to win management of Los Alamos, though system officials stress they still do not know if they will actually submit a bid. The UT regents have authorized spending up to $500,000 "for planning related to a potential bid for the Los Alamos contract." By November, they will announce whether UT will pursue the bid. The DOE will announce the winning bid in late spring 2005. According to UT, the entire process could cost up to $6 million.

UT System Chancellor Mark Yudof has hinted in public statements that UT may partner with defense companies to enhance the bid, but system officials also note that DOE has yet to indicate what criteria it will be using to evaluate contenders. Beyond that, details of the proposal have been too few and far between for the liking of some students and faculty, as well as state Rep. Lon Burnam, D-Fort Worth. "We're calling for some sort of open dialogue so dissenting opinion is built into the bidding process," said Colin Leyden, Burnam's legislative director. "The UC System is polling their faculty on Los Alamos. They are also sponsoring a Web site where debate and white papers are posted. We haven't seen that happen with the UT System." After meeting with UT Regents Chairman Charles Miller, Burnam said that Miller was amenable to a more open process.

The Los Alamos bid does enjoy some support on UT's flagship campus from students and faculty who point both to the financial rewards to the system – like the $9 million in annual management fees now going to California – and the opportunities Los Alamos could provide for faculty and graduate student researchers. In an editorial in The Daily Texan, outgoing UT Student Government President Brian Haley opined that "Through a strategic partnership with Los Alamos, the UT System would be able to increase its leadership [and bring] enormous prestige to our faculty and researchers."

But opponents of a partnership – particularly members of the activist group UT Watch (with which this reporter has worked in the past) – argue that, far from bringing prestige to UT, management could pose a tremendous liability for the university. They cite damning reports from whistle-blowers and watchdog groups that Los Alamos has failed to deal with security problems and is vulnerable to both internal lapses and outside terrorist threats. In the past, they point out, UC has been held responsible for security issues that may be impossible for any university to resolve.

Critics also lament the threat to academic freedom Los Alamos poses. "Forty percent of Los Alamos' research is classified. This seriously undermines the university's main objective to provide open research and learning," said Dominique Cambou, a UT-Austin physics student and member of a coalition leading opposition to Los Alamos. "I feel that the cost and the risk of UT's management of Los Alamos vastly outweigh any small benefits to the university."