No Clear Winner as Bradley Trial Wraps Up

Will developer's bankruptcy case end with a split decision? 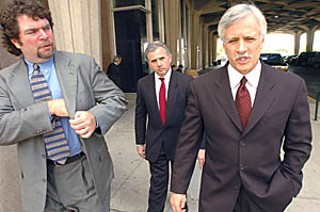 Gary Bradley with his lawyers (Photo By John Anderson)

At its simplest, a ruling in the Gary Bradley bankruptcy trial would turn either on a circumstantial case based on a series of fishy transactions, or conversely on the testimony of nearly a dozen witnesses who denied even a whiff of wrongdoing. But given the knotty nature of the two-week trial, which delved into decades-old land deals and yellowing ledger sheets, the ruling – expected this summer – could take on multiple dimensions.

Bradley owes the government about $75 million in unpaid loans and more than $5 million in back taxes. Lawyers representing Bradley's creditors theorize that, two years before he filed for bankruptcy, the Austin developer instituted a series of shifty maneuvers to hide his valuable assets in the Lazarus Exempt Trust. In his Chapter 7 filings, Bradley claimed just $500,000 in assets, with most of that amount tied up in a moldy lakefront condo. Throughout his bankruptcy proceedings, Bradley's position has always been that he's flat broke and just wants to have his debt to U.S. taxpayers erased so he can get on with making an honest living.

But creditors' lawyers argue that Bradley is hiding at least $30 million worth of land holdings in the Lazarus Trust, an entity Bradley's sister, Kaye Bradley, opened in 2000 on her brother's behalf. She launched the trust with nothing more than a $1,000 check. From there the value of the trust quickly ballooned to millions of dollars – without the sister contributing a penny more to the account. A fraud examiner with a forensic accounting firm, Steve Thomas, testified that $800 of that $1,000 went toward only one asset purchase. His testimony, though very brief, was designed to cast doubt on the idea that an initial investment of $800 could generate millions for the trust.

"Since we had to build a circumstantial case based on these transactions, our position is that there has got to be something else going on," one of the lawyers explained. "It's the 'something else' that we have to convince the judge of what actually happened ... that this is all a sham."

But it's uncertain whether those red flags will be sufficient to prove the creditors' case, when nearly every witness who testified – from Bradley's sister, to Belo Corp. heir Grant Gomez, to prominent Houston investor Tommy Thompson, to former business partner Jim Gressett – all swore that every agreement, or transaction, or loan, or handshake they ever made with Bradley was strictly aboveboard. Nevertheless, testimony from some of the witnesses raised more questions than they answered.

Construction company owner Jimmy Evans, for example, testified that in the spring or summer of 2000, he bought a 34-acre tract at MoPac and Slaughter for $684,000, with the idea of developing the property. But he testified that the property's drainage problems and proximity to the controversial Longhorn Pipeline convinced him the land wasn't altogether developable. He said Brad Beutel, Bradley's cousin who oversees the Lazarus Trust, approached him about buying the land for $550,000. Evans said he held off on the offer because he was trying to negotiate a $2 million sale with Stratus Properties. When the Stratus deal fell through, he accepted Beutel's $550,000 offer in the form of an unsecured note.

Today, the property that Evans deemed undevelopable is being developed as a single-family subdivision, and some homes have already been sold. Lawyers for Bradley's creditors believe that Evans held the property for Bradley until he (by way of Beutel and Lazarus Investments, a trust entity) was in a position to buy the land. Evans denied that such an arrangement was ever made. "I discussed with Gary that if he ever had the financial ability ... he was always welcome to buy into any of our deals," Evans said.

Taube points to Evans' and other witnesses' testimony to show that no testimony supported the creditors' claims of impropriety. "There is not a single living, breathing person who adopts the allegations that [creditors' lawyer Frank Ikard] was making," Taube said. "Every single witness that testified said that their theory is a bunch of hooey ... that no one owned anything for anybody else, nobody hid assets for anybody else; it was all just a bunch of nothing."

Apart from the fraud examiner, only one other witness, notary public Lisa Dean Kaspar, failed to do Bradley any favors on the witness stand. Kaspar invoked the Fifth Amendment on every question put to her regarding whether she notarized documents or backdated any documents for Bradley or business partner Jim Gressett. Again, Taube brushed aside her testimony as completely irrelevant. "They brought her in, I think, for pure theatrics." 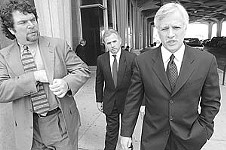