Last spring, 29-year APD veteran Cmdr. Robert Gross and his three lieutenants were hard at work creating their new command. The 12.69-square-mile area stretches from I-35 west to the MoPac rail line, and from Anderson Lane north to Walnut Creek. It was carved from the existing Northwest and Northeast Area Commands in an effort to reduce police response times and to ease the call load for the officers working there, who were spending an inordinate amount of time responding to calls in the north central neighborhoods – especially in hot spots like the Rundberg Lane corridor, where drug-dealing and prostitution had become commonplace.

The idea behind the new, smaller command (as with its counterpart, the South Central Area Command, centered on Riverside and Congress) was to encircle the high call areas and saturate them with a dedicated group of officers in the hope that the added attention would help reduce crime. "We have a significantly different population to other areas in the city," said Gross. There is a large immigrant community, "like Ellis Island, Texas style. And we have an extremely high family violence rate, assaults, a high robbery rate – primarily of the immigrant community – a high burglary rate, and large open-air narcotics markets and prostitution around the I-35/Rundberg area." The area's problems are not much different than those in the rest of the city, Gross points out, but "the reality is that the problems are more concentrated."

This was a chance, they knew, to do something different – to apply what they'd learned from their experiences in the police department, to analyze their area, and to chart a new course of action. Traversing the North Central neighborhoods, Gross, Lt. Randy Pasley (who oversees all of the North Central community-policing activities), and Sgt. Will Beechinor (who supervises the four district representatives), were acutely aware that traditional law enforcement alone wouldn't make North Central a healthier place. "The biggest thing [we] were seeing was distressed neighborhoods," said Beechinor.

Among more established and more affluent neighborhoods were pockets of blight – marked by enormous amounts of trash, junked vehicles, and swaths of deteriorating rental properties, among other things. "[T]raditional means of law enforcement wouldn't work, because they had not worked," said Pasley. "The proof was in the pudding – a bad location left to its own devices that just got worse. So we had to do something innovative. How do we undo what took decades to make?" he asks. "[W]e knew this wouldn't be a quick fix to correct what is going on out there."

But they were determined, and had assembled an experienced team. Gross agreed to head up the new NCAC on the condition that he could handpick all of the officers. For the community policing team Gross tapped Pasley and then Beechinor who, in turn, recruited the best district reps he could find: Hellums (the strategist), Gizette Gaslin (the go-getter), Hank Moreno (the bilingual, immigrant-community specialist), and Dale Cooper (aka Mr. DR, the APD's most veteran community policing officer). "Throw a problem at them and they're all on top of it," the 22-year veteran officer said. And with that, their team – the North Central Seven – was formed.

It was up to Pasley to formulate a plan. He began research in earnest and quickly found that even among the vast resources available to police through the federal government, there weren't any step-by-step how-to plans for what they wanted to do. "So we decided to do our own 'Distressed Neighborhood Plan,'" said Pasley, "which became Operation Restore Hope." 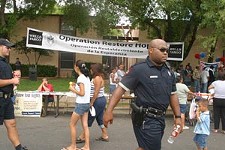