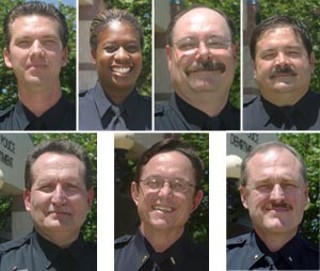 Hellums, the NC7's strategist, has spent a majority of his career patrolling the neighborhoods of North Central, beginning when they were part of the Northwest Area Command.

Beechinor chose Gaslin, a self-described "people person" for the NCDR team because of her energy, enthusiasm, and determination.

Cooper, the APD's most veteran community policing officer, has been working the DR beat since 1992, before the current DR system was implemented and the job was referred to as "community liaison officer."

Moreno, who spent 10 years with the San Antonio Park Police before joining APD, enjoys working with the immigrant community to build trust among the community and police. Many of the immigrants come from countries where police corruption is the norm.

Gross agreed to head the NCAC on condition that he and his command staff be allowed to handpick their officers – without that ability, he told Chief Stan Knee, the new command would fail.

Beechinor (who pulls double-duty within the NC, supervising the DRs and the command detectives) used to live on Galewood Drive, one of the neighborhoods now on the ORH cleanup list. It was a great place to live, he said, and can be again.