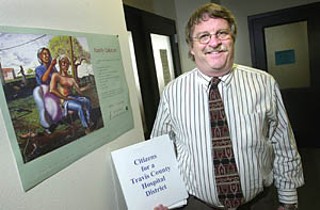 Travis Co. Probate Judge Guy Herman has been pushing for a countywide hospital district for more than two years now. He'll see the end result of that effort on May 15, when voters give the thumbs-up or -down on the concept. Early voting began yesterday; for more information, see Hospital District Vote Brings Heavy Momentum. (Photo By John Anderson)

Quote of the Week: "Everybody has the right to run for public office. Everybody tries to get votes from each other. That's the end of my answer." – Ralph Nader, defending his presidential campaign to Austin reporters.

Early voting on a variety of races and issues started yesterday and continues through Tuesday, May 11. Among the major decisions are AISD and ACC board seats, the creation of a countywide hospital district, and collective bargaining for Austin firefighters. See p.8 and p.26.

This week the owners of the Backyard filed a lawsuit against Chris Milam and his partnerships over a parking dispute on the neighboring property where Milam proposes to build a massive retail development – the Shops at the Galleria – that could wipe out 2,000 parking spaces for the music venue. Milam earlier informed Naked City that the parking issue had been worked out – the lawsuit pleadings suggest it ain't so. – Amy Smith

In a sign that Dell, Inc. and recycling activists may be getting closer to being on the same page, company founder and CEO Michael Dell held a national webcast and teleconference Monday to discuss concerns over toxic electronics waste. The hourlong event was co-organized by the GrassRoots Recycling Network, longtime Dell critics who have been pushing Dell toward a more comprehensive and transparent recycling policy. "This is truly an historic event," said David Wood, executive director of GRRN and organizing director of the Computer TakeBack Campaign. "For the CEO of a Fortune 500 company, under attack from grassroots pressure, to engage directly with those students exerting that pressure is literally unprecedented." For his part, Dell said, "We recognize that a one-day event or a two-day event is not a solution. But it can start us on the road to a solution. Especially in a community where there is nothing like this at all." You can view the teleconference at www.ivtweb.com/dell. – L.N.

Twenty-nine-year-old Austin Police Cadet Trina Kay Andretti died April 14 in a car wreck on Highway 183. Andretti was leaving the APD academy off McKinney Falls Parkway in Southeast Austin and was crossing the highway when a vehicle heading south hit her car. Andretti was transported to Brackenridge Hospital where she died as a result of injuries sustained in the wreck. After an April 19 memorial, Andretti was commissioned as a full peace officer during a posthumous ceremony conducted by Chief Stan Knee. – Jordan Smith The Austin Parks Foundation reports that despite wet weather this past weekend, more than 800 of the 1,000 registered participants showed up for its It's My Park! Day activities, picking up litter, weeding and planting, clearing trails, and repairing playscapes, benches, and tables. Go to www.austinparks.org for more info on the nonprofit foundation. – L.N.

Deaniacs are still pushing former Democratic presidential candidate Howard Dean's agenda, even though Dean himself has now endorsed John Kerry. Local Deanies can go to www.democracyfortexas.org to continue their activism. And in other Web activism news, a Texas version of MoveOn.org, the wildly successful liberal organizing site, has sprouted up – with funding from MoveOn itself. The new DriveDemocracy.org was started with the remaining proceeds of MoveOn's Defending Democracy campaign, which raised $1 million in 2003 to fight Tom DeLay's partisan redistricting of our state. At press time, the site was offering Texans ways to give Gov. Rick Perry advice on education funding. The site is being directed by Austin political consultants Glenn Smith and Nathan Wilcox. – L.N.

Thanks to a $75,000 grant from the Corporation for Public Broadcasting, KUT Radio (90.5FM) expects to begin delivering high-definition digital radio as early as February 2005. The National Public Radio affiliate would be one of the first stations in Central Texas to use the technology. A KUT press release says that in addition to improved audio quality and reception, HD radio would also allow: a secondary broadcast stream enabling KUT to deliver additional programs from its primary programming; public safety services; data information on radios equipped with a display panel, including song title and artist info, news updates, and weather info; and TiVo-like record, pause, and forward capabilities. The total cost of upgrading to a digital signal will be nearly $150,000; KUT will seek to raise the matching funds over the course of the next year. – L.N.

At the AISD board meeting Monday, human resources director Michael Houser reported that 92% of all Austin teachers are now certified and teaching in their chosen field (up from an 85% certification rate three years ago) and that the average experience of an Austin teacher has increased slightly, to just over 11 years in the classroom. Houser reported more generally on teacher recruitment and retention efforts and said, "It remains critical ... to aggressively pursue even deeper and more long-term strategies for attracting, training, rewarding, and retaining the very best and brightest teachers for Austin students." Houser said his office has set recruiting goals for 2004: 1) Hire 300 minority teachers, and 2) half of the newly hired teachers should have at least two previous years of classroom experience. – Michael King

The chip is starting to hit the fan for a Texas-based manufacturer of electronic voting machines. Last week, a panel named by California's secretary of state called for decertifying Diebold Election Systems' AccuVote TSx touch-screen voting machines, which were used by four California counties during the primaries. The panel unanimously criticized the McKinney-headquartered company's product after many of the machines failed to function properly on election day, and even called for a criminal investigation into the installation of unapproved software on the machines. The company has denied any illegal activity. Secretary of State Kevin Shelley is expected to make a final ruling on the recommendation April 30. Austin-based Hart InterCivic – manufacturers of the eSlate system used in Travis Co. and in California's Orange Co. – uses a wheel-and-button system rather than touch screens and is not affected by the recommendation. – L.N.

Sierra Club President Larry Fahn is scheduled to walk a portion of the Lone Star Hiking Trail in Sam Houston National Forest today (Thursday) to call attention to scheduled logging in that portion of the forest and to promote the club's "State of the Sam Houston" report, which a press release said "exposes the Bush administration's assault on the National Forest and calls on the administration to manage the Sam Houston for recreational and environmental purposes." Sam Houston National Forest encompasses 162,984 acres in Montgomery, San Jacinto, and Walker counties, north of Houston. See the report at www.sierraclub.org. – L.N.

Despite widespread objection from citizens and advocacy groups, the Health and Human Services Commission has decided to move forward with a $5,000 family-assets test for eligibility for the state's Children's Health Insurance Program. The CHIP program provides health insurance for children in working families of moderate incomes (currently $18,850 to $37,700 for a family of four, but to be reduced in May), who earn too much money for Medicaid but too little to afford private health insurance. The HHSC modeled the assets test on that used for food stamp eligibility (aimed at families with much lower incomes). In response to public hearings, the HHSC excluded certain assets such as retirement or education accounts, but still estimates 4,700 more children will lose coverage under the new rules. (Public interest advocates say the figure will be higher.) Last year the Legislature ended vision and dental coverage through CHIP and raised the copayment, and 130,000 children have lost coverage altogether since the fall – yet the agency now says state health care funds will show a deficit. – M.K.

A hearing is scheduled in Austin Thursday (today) in a lawsuit over the Democratic primary in Congressional District 28, in which former Secretary of State Henry Cuellar achieved a narrow victory over incumbent U.S. Rep. Ciro Rodriguez following a recount that added hundreds of previously unknown votes to Cuellar's total. Rodriguez has brought suit over the results, and the San Antonio Express-News reported Tuesday that his lawyers have begun to make specific charges concerning voters they say may be nonexistent. According to the Express-News, Rodriguez will charge that more than 500 people who voted in the primary in Webb Co. are registered either at vacant addresses or at homes where they do not live. Rodriguez attorney Buck Wood said he believes there are many more irregularities to be found and that "we haven't even gotten to Zapata County yet." Previously uncounted votes from Webb and Zapata gave Cuellar the victory. A spokesman for the Cuellar campaign rejected the charges and accused Rodriguez's campaign of "misrepresentation." – M.K.

On Sunday, May 2, the Austin chapter of the National Organization for the Reform of Marijuana Laws will host the 2004 Medical Marijuana Potluck Picnic 2-6pm at Beverly S. Sheffield Northwest District Park (7000 Ardath). The Friday potluck coincides with the annual Cures Not Wars Marijuana March, a global event happening this weekend. But instead of hosting a rally at the Capitol, NORML will focus on encouraging participants to collect petition signatures to support a Texas medical marijuana bill, which state drug reformers would like to see filed in the Legislature next year. For more on the event, go to www.austinnorml.com, or contact David Fried at david@fried.cc.

The city of Austin will hold a hearing 4-6pm on Monday, May 3, on a proposed mitigation policy for development in the Barton Springs Zone. The hearing will be at the Waller Creek Plaza, Room 104, 625 E. 10th. City officials directed staff to draw up a proposal in the wake of a recent debate over a proposed Lowe's Home Improvement store in Southwest Austin, in the recharge zone of the Edwards Aquifer. The City Council narrowly approved the project, and then ordered the study.

David Bacon, a writer and photojournalist for The Nation, The Progressive, and other publications, will speak on NAFTA, Immigration and Iraq – Who's Paying for the New World Order? on Monday, May 3, at 7pm, at UT's Bass Lecture Hall (in Sid Richardson Hall, at 26th and Red River). Bacon recently published the book The Children of NAFTA: Labor Wars on the U.S./Mexico Border. For more info, e-mail pat@thirdcoastactivist.org or call 458-8635.