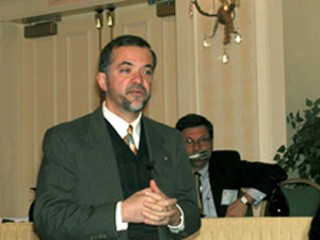 Last spring's dismissal by Gov. Rick Perry of Tony Fabelo, head of the state's Criminal Justice Policy Council and chief number-cruncher for the Texas prison system, shocked and bewildered many legislators of both parties. Fabelo was well-known and well-respected, had been doing the job for two decades under several administrations, and his analyses of prison overcrowding and policy issues had, by all accounts, served the state well, making the Cuban-born Ph.D. a national authority on corrections.

Fabelo's firing was indirect but absolute. Last June, Perry simply line-item vetoed the budgetary funding for the CJPC, saying its work was done and that he wanted to save the council's $1 million budget. Even on the face of it, that didn't make a whole lot of sense. Criminal justice is an ongoing state responsibility, and over the years, the council had collected twice as much in federal grants as it ever received from state general revenue. Immediately there were whisperings that the elimination of Fabelo's agency might have another reason – the governor's proposed privatization of the state jail system, for which Fabelo acknowledged only lukewarm enthusiasm. An influential Republican legislator has since delivered a more precise explanation of Fabelo's fall from grace. "Someone in the governor's office," the lawmaker said later, "didn't like his [Fabelo's] numbers." That someone has been identified as gubernatorial chief of staff Mike Toomey.

What has emerged after Fabelo's dismissal last summer are details of a plan by the state's leadership both to save money (in theory) and follow their ideological instincts by allowing private business to operate a larger hunk of the Texas Department of Criminal Justice, the state's 148,000-inmate prison system. This move would, incidentally, give a lot of business to politically connected private companies.

Apparently Tony Fabelo and his calculator were in the way.

Not With the Program

Fabelo, now working as a national consultant on prison issues, has refused all comment on his dismissal. According to someone at the Capitol in a position to know, however, Fabelo was called into the governor's office in March of last year and asked to "cook the books" – that is, soften the anticipated consequences – regarding the governor's edict to cut 14% of the corrections budget. Fabelo refused to change his analysis, and told the Legislature that the Perry cuts would have long-term ill consequences for the prison system.

That was one strike.

Then came privatization. At the beginning of last year's financially challenged session, Rep. Ray Allen, R-Grand Prairie, chairman of the Corrections Committee, introduced HB 1669, which would have allowed the TDCJ to further privatize 21 state jails, used for less dangerous offenders and home to a total of about 11,000 inmates. At the time, five jails were already operated by private companies. The move to take the next step and hand over management of the other 16 had been prompted in part by an analysis by Austin GOP Rep. Jack Stick, a member of Corrections and author of his own privatization bill. Former prosecutor Stick suggested that the state might show significant savings by putting more state jail contracts out to bid.

Fabelo's agency studied the issue and concluded that the state would save 3% to 4% of its costs by privatization. Unfortunately, Allen's bill had set the threshold for privatization at 5% savings (slashed from the previous standard of 10%). Fabelo's estimate was too low to warrant doing what state leadership apparently desired. That gave him two strikes – apparently all you get at Rick Perry's Capitol.

Gradually, the bill languished because of reservations about private companies' actual record in managing inmates. Still fresh in legislative memory was the dismal performance of the Wackenhut Corrections Corp., which had run the Travis State Jail in Austin from March 1997 until November 1999, when complaints of poor performance (including a guard-inmate sexual assault scandal) led TDCJ to reassume control of the jail. It was in this context, amidst the charges and counter-charges before the committee, that Fabelo's latest numbers irked leadership. The issue was no longer supporting the bill, but obedience to higher authority – and to the goal of one set of numbers officially documenting what leadership wanted.

Fabelo was on vacation in Florida in June when Perry zeroed out his whole agency. A subsequent effort by legislators, especially in the Senate, to reinstate the council was derailed when word came back from the governor's office that Perry had "lost faith" in Fabelo during a previous legislative session (but had waited two years to act, in the meantime appointing Fabelo to the governor's crime council).

No one is certain how much direct involvement the governor had – other than, of course, signing the veto proclamation. The Capitol presumption is that the real heavy in the aftermath of HB 1669 was Perry's chief of staff, Toomey, also a former lobbyist for the Corrections Corporation of America – then managing one state jail and with plenty to gain from further privatization. And there's an even more persistent Toomey fingerprint at the scene of the Fabelo hit. Even Toomey's enemies, considerable in number – many pols feel compelled to begin discussions of the chief of staff by saying they don't like him – say that he is a true believer of conservative fiscal dogma, as opposed to a "play-conservative" who might blow with the wind. Toomey believes that government can always be cut a little bit more and, further, that whatever is remaining after the cuts can probably best be contracted out to private enterprise – a vision widely shared among the younger generation of Republican lawmakers.

In an interview last week, Toomey firmly denied that he was responsible for ridding state government of Tony Fabelo and the CJPC. "That's an absolute lie," he said of the rumor that he was trying to make a cushy deal for the prison industry. "Tony quit," Toomey added, although he did note a moment later that Fabelo's "quitting" coincided with the governor's veto.

How Cheap Is Cheap?

The failure of HB 1669 did not close the matter. Corrections Corporation of America has gone from running one state jail to running all five of the state's already privatized jails, after submitting a bid for $30 per inmate per day, compared to TDCJ's own figure of a cost of $37. How this will turn out is anyone's guess. TDCJ, with Fabelo gone, is now using updated (non-Fabelo) figures. For example, in TDCJ's official calculations, CCA's bid does not include certain health care and education costs, which are picked up by the state. If TDCJ's own cost figures were calculated using Fabelo's method, it would be about $32, not $37, making the state much more competitive with private enterprise. It's all in the numbers you choose. (Fabelo's study of privatization was in fact not completely negative, but had concluded that it can only work if privately run facilities are closely monitored by TDCJ.)

The biggest issue in the privatization debate has been guard pay, which Fabelo found was 28% to 37% lower at private prisons than at TDCJ, figures that frightened lawmakers. The last few years have seen an effort by many of these same legislators to pay prison guards higher salaries, in order to get better-trained and more-reliable people. Use of private companies means a step back in that respect.

For their part, private prison representatives have no doubt they can do the job. A spokeswoman for the Corrections Corporation of America assured legislators, during hearings last session, that CCA produces "a good product."

And thanks to the governor and perhaps his chief of staff, CCA no longer has to worry about official second guesses from Tony Fabelo.