At trial, bankrupt Bradley pleads ignorance of trust and accounting 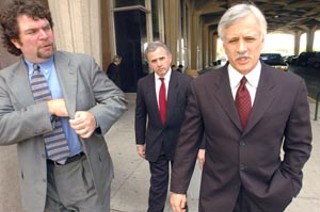 Gary Bradley has had a heady, 25-year run as a real estate rainmaker with a reputation for finessing his way in and out of elaborate business deals. Yet, in Bradley's equally elaborate bankruptcy trial, now in its second week, he and his lawyers insist that finances and mundane business details were simply not Bradley's natural strengths – hence his lamentable collision with Chapter 7.

Bradley's supposed nuts-and-bolts accounting shortcomings figure centrally in his effort to secure the dismissal of a $75 million debt to the Federal Deposit Insurance Corp., which grew out of the collapse of the savings and loan industry in the late 1980s, and more than $5 million he owes in connection with a long-standing tax fight with the IRS.

On the other side of the cavernous federal courtroom, a team of lawyers representing Bradley's creditors is painting an altogether different profile of the man they contend is far from broke. They believe that Bradley has stashed assets worth $30 million in the Lazarus Exempt Trust, an entity his sister established with a $1,000 check four years ago, naming Bradley as the primary beneficiary. If U.S. Bankruptcy Court Judge Frank Monroe buys into the creditors' argument, he could order the otherwise protected trust uncorked and its assets divvied up to pay down Bradley's debts.

Here's the catch: Neither the trust nor Bradley will be easy to crack. It's true that a series of curious financial transfers involving Bradley-affiliated entities moved into the trust prior to his bankruptcy filing, but those transfers don't necessarily represent illegal actions. And Bradley himself denies any connection with the formation or management of the trust, as he reiterated frequently during his 2 1/2 days on the witness stand last week. Throughout his testimony, he refused to bend under the mountain of documents that attorney Frank Ikard and Justice Department lawyer Herb Linder introduced into evidence.

Other than Bradley, the court heard from only one other witness last week: Brad Beutel, Bradley's second cousin, business associate, and trusted guardian of Lazarus Trust. Beutel spent more than two days on the stand, vouching for his older cousin's distance from and disinterest in the complex operations of the trust. Why then, Ikard wanted to know, did Beutel copy Bradley on a memo he wrote detailing a particular transfer to the trust? Beutel studied the memo and chuckled. "I know he didn't read this," he said, explaining that his cousin just isn't one for details. Beutel also explained away a number of paper discrepancies, including what creditors' lawyers believe are documents deliberately backdated, either for tax purposes or to obfuscate financial maneuvers designed to build Bradley's empire.

Trust attorney Eric Taube countered that the apparent discrepancies were simply honest mistakes, eliciting heart-rending testimony from Beutel that recounted his wife's extended battle with cancer that ended in November 2002. During this time, Beutel recalled, his preoccupations with his wife's health compounded by his poor working relationship with Bradley's bookkeeper contributed to some accounting oversights.

Angels to Phoenix to Lazarus

Ikard, leading the charge against Bradley, has pieced together a dizzying number of financial transactions that he believes offer strong, albeit circumstantial, evidence that links Bradley to Lazarus. Ikard has developed an intricate timeline that follows Bradley on a circuitous path beginning in September 1990, when Gibraltar Savings brought a lawsuit against Bradley and partner James Gressett for defaulting on loans the pair took out to build the Circle C Ranch, and ends in July 2002, when Bradley filed for bankruptcy and claimed just $500,000 in assets. The major portion of the assets, according to those filings, is tied up in a mold-infested condo Bradley owned on Lake Austin that the court has since released to the IRS – though it's uncertain what sort of return a moldy waterfront condo will bring the taxpayers.

Between 1990 and 2002, when the real estate business went from bust to boom to bust, Ikard's timeline traces the descent of Bradley's Circle C Development Corp. into bankruptcy, followed by Bradley and Gressett's sale of their ownership of the Houston Rockets, Gressett's bankruptcy in 1994, and an FDIC judgment against Bradley and Gressett in June 1995.

Three months later, according to the timeline, a partnership called Phoenix Holdings was formed to acquire the remaining undeveloped residential properties at Circle C, which had been picked up and held by Freeport-McMoRan – another prominent player in Austin's development battles – when Bradley's development company went bankrupt. Phoenix Holdings was initially owned by three key Bradley associates: Hamid Noshirvani, Vahid Noshirvani, and Grant Gomez. (The moneyed, mysterious Noshirvani brothers serve as – in Bradley's words – "my guardian angels"; they've always been there to get him out of a jam.) Five years after its formation, Phoenix Holdings came under Gressett's control on Dec. 31, 1999, only to be transferred to Beutel the next day, Jan. 1, 2000.

Shortly after Beutel's control of Phoenix was established, Bradley was ready to cut a deal with the city of Austin to settle a 20-year-old legal dispute centering on his plans to develop the remaining Circle C properties on environmentally sensitive land atop the Edwards Aquifer. The environmental community was deeply divided on the truce, but the City Council signed off on it, and the deal was signed and sealed in the spring of 2000.

Ikard outlined a similar scenario that occurred with Streetman Homes in 2001: Gressett's wife, Penny, controlled 60% of Streetman, but in name only; the stock, Ikard believes, was actually owned by Bradley. Over time, in Ikard's reconstruction, Bradley conspired with the Gressetts to move the Streetman assets to Lazarus by having Beutel buy the 60% for $3.6 million, with nothing more than an IOU note. Gressett then bought back the stock for $9 million, which made Lazarus $5.4 million richer. Though documents show that nearly six months passed before Gressett bought the stock back from Beutel, creditors' lawyers believe the two sales took place the same day, or within days apart, and that the papers were altered to show a wider time span.

But Lazarus attorney Taube, through his examination of Beutel, sought to prove that nothing improper or illegal was involved in the transaction. For one, Beutel said he never made a payment on the $3.6 million purchase because his first note wasn't due until Jan. 1, 2002. He said he approached James Gressett instead of Penny about selling the shares because he handled all of his wife's business affairs. Bradley, Beutel added, was never involved in any decision regarding Streetman.

For a man accustomed to being at the center of high-profile controversies, Bradley's bankruptcy trial is playing to a very small audience of reporters, lawyers, and documentary filmmaker Laura Dunn, who, with the backing of director Terrence Malick, is chronicling the history of Austin's growth wars. Bradley's triumphs and travails will likely figure prominently in the film.

The developer's fate on the bankruptcy question will probably be decided by the time his face appears on the silver screen – or perhaps not. Judge Monroe has locked in only two weeks for the duration of the trial, but attorneys on both sides are so methodical in their examination of witnesses that it was uncertain at press time whether the case would actually wrap up this week. "I'm not sure you'll finish before I retire," Monroe told the lawyers on day four, only half joking.

Much of the wealth in the disputed Lazarus Exempt Trust was built through a series of near-simultaneous financial transactions between Bradley associates.

Dec. 31, 1999-Jan. 1, 2000: Phoenix Holdings comes under the control of Bradley's partner, James Gressett, then is transferred to Bradley's cousin and business associate Brad Beutel the very next day.

Spring 2000: Bradley reaches a settlement with the city of Austin to develop the remaining Circle C properties atop the Edwards Aquifer.

Lazarus Trust is formed six days after Bradley signs the settlement offer with the city.

2001: Lazarus Trust, acting through Brad Beutel, buys 60% of Streetman Homes from James Gressett's wife, Penny, for a $3.6 million promissory note, then sells it back to Gressett for $9 million – turning a $5.4 million profit without ever putting up any money of its own.