Is the district really growing? And will $420 million be spent in the right place?

Tweet
print
write a letter
The Austin ISD board of trustees last week held its first work session on a proposed $420 million bond package that would go before voters this fall. The board's main focus was whether demographic data supported building six new schools, costing $115 million, as recommended by the committee that developed the bond proposal. However, their discussions also revealed that AISD's demographic challenges are more than just a question of "too many students."

No one disputes that many Austin schools, especially elementaries, are well over capacity. AISD currently has 600 portables serving as classrooms for 20,000 of the district's 78,000 students. Superintendent Pat Forgione gave as an example the campuses that would be relieved by two proposed elementaries in the South and Southwest: Menchaca currently has 20 portables, Kiker has 22, and Baranoff 14. "That's 56 classrooms," said Forgione. "Folks, we typically build at 32. That's almost two new schools!"

But the numbers aren't as simple as they seem. Many of the students crowding these overflowing schools are moving from other parts of AISD, rather than from outside the district. In other words, overcrowding in Austin's outskirts may be matched by underutilization in the central city – a fact that could complicate the board's job of selling voters on a bond package that will raise the tax rate 4.2 cents per $100 of assessed value. In fact, a July 2003 report that demographer Dennis Harner presented to the board actually reveals a net out-migration from AISD. While some students are lost because they drop out of high school (AISD's average four-year completion rate is about 75%, which accounts for both dropouts and transfers), the biggest spike in students leaving the district comes between fifth and sixth grades. In 2001-02, this drop amounted to 335 students. Many of these are students whose parents move them to charter or private schools or to neighboring districts like Leander or Pflugerville.

Harner said it would be premature to comment on which schools and areas are losing students – he'll present a more up-to-date report on these issues at the board's next session – but he added that the pattern is not surprising. "This is not an AISD phenomenon, it's an urban phenomenon," Harner explained. "It is the more affluent leaving and being replaced by the less affluent."

Trustee John Fitzpatrick said that trend poses challenges that will take more than a bond package to fix. "AISD is different from a lot of cities in that we've largely kept the middle class in public schools," he said. "So my priorities are not only to close the achievement gap between low- and higher-income students but also to hold onto the middle class – white, black, and brown – in public schools."

Nevertheless, getting voters to approve the bond package is the immediate priority, and nailing down its final details the first step. When the Citizens' Bond Advisory Committee passed its recommended package to the board, they declined to weigh in on three ideas that only emerged when parents rallied behind them at a series of public forums the CBAC held in March, after the committee had already spent a year developing its recommendations. These were calls for a new middle school in Circle C, a performing arts facility at McCallum Middle School, and a science center at Travis High. The trustees likewise decided not to tackle these additional requests and instead sent them back to the CBAC for a recommendation. While CBAC leaders said they were up to the task, the committee's John Blazier warned that it wouldn't be easy. "We have 30, maybe 45 days," he said. "It's going to be a challenge to provide the quality report we would like." 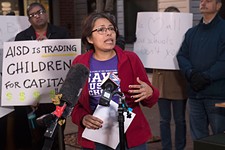