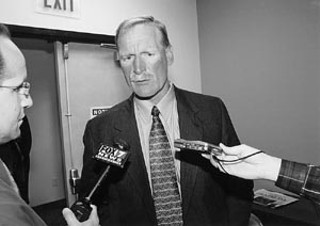 On the local run-off front, in the only unresolved Democratic race, Precinct 4 Constable Maria Canchola held off a spirited challenge from her former Deputy Leticia Lugo to win a second term. Though in percentage terms Canchola took a resounding 57% of the vote, that translated into a margin of only 309 actual votes out of the 2,101 cast in the Southeast Austin precinct. The endorsement of libertarian activist Mike Hanson, whose strong showing on March 9 forced the run-off, apparently did little to help Lugo.

On the GOP side, APD Cmdr. Duane McNeill earned the nod to face Democrat Greg Hamilton in November's race for Travis Co. sheriff. McNeill, who got campaign help from former sheriff and current state Rep. Terry Keel and his brother Thornton, piggybacked on voter interest (such as it was) in the CD 10 race in the northern part of the county to offset Drew McAngus' strength in the southwest, where McAngus has served two terms as Precinct 3 constable. Thornton Keel handily won his own run-off race in the contest to succeed McAngus (he'll face Democrat Richard McCain in November) and become the third Keel brother to hold local office; Judge Patrick Keel faces a stiff challenge from Democrat Stephen Yelenosky this fall.

Up north, as expected, former Texas Department of Public Safety Director James Wilson handily bested former Deputy Rick Faught to become Williamson Co.'s fourth sheriff this year, succeeding controversial appointee Jim ("Not the Same Guy") Wilson, who succeeded the even more controversial John Maspero. There's no Dem on the ballot. In the closest and perhaps most surprising local race of the season, Brushy Creek MUD board leader Lisa Birkman beat former Round Rock Mayor Charlie Culpepper by 144 votes to become the new county commissioner for Precinct 1, the seat long held by Mike Heiligenstein, now director of the Central Texas Regional Mobility Authority. Birkman, running as a reform candidate and endorsed by the Statesman, also beat former Round Rock Mayor Mike Robinson back in March in yet another statement of Williamson Co. voters' frustration with the ways of the county's ruling good-ol'-boy elite. (Birkman, who has no Democratic opponent in November, is the first woman to be elected to the Williamson Commissioners Court.) And in Precinct 3, based in Georgetown, retired accountant Tom McDaniel profited from strong Sun City support to beat Jarrell City Councilman Jeff Stockton for the nod to succeed retiring Commissioner David Hays. McDaniel will face an actual Democrat, former Georgetown school board member Sharon Webster, in November.