Bankrupt developer Gary Bradley is about to lose his waterfront condo to the IRS, but the feds may soon regret taking control of the white elephant on Lake Austin, his attorney says.

"It's infested with mold and it's uninhabitable," said San Antonio lawyer Ray Battaglia, who represents Bradley in a labyrinthine bankruptcy case involving more than $75 million owed to the federal government for failed loans and back taxes. About $4.5 million of that is owed the IRS, but Battaglia says he doubts the government will reap much of a profit from the condo, despite its nearly $500,000 value. Bradley has an unsettled insurance claim stemming from the mold infestation, the lawyer added. State law allows for homestead exemptions in bankruptcy cases, but the law doesn't extend to the federal level. U.S. Bankruptcy Judge Frank Monroe last month gave the IRS permission to foreclose on the home.

The flamboyant developer, who has battled environmentalists on several fronts over the years, took out most of his loans to build the Circle C Ranch residential community in Southwest Austin, only to default on them during the real estate bust. Bradley continued pursuing his fortunes in the real estate business until filing for Chapter 7 in 2002.

Ron Ingalls, the bankruptcy trustee charged with protecting Bradley's creditors, has consistently argued that the developer hid millions of dollars in assets in a trust fund before filing for bankruptcy. Ingalls and his attorney, Pat Hargadon, will lay out that argument when the case finally moves to trial on April 19. The trial is expected to last two weeks, prompting Judge Monroe to arrange for another jurist to handle the day-to-day affairs of the bankruptcy court in the interim. Ingalls said that's fairly unusual in bankruptcy cases. But then, Bradley's trial is expected to be anything but typical. "If not the best show in town," Ingalls said, "it'll be the most interesting." 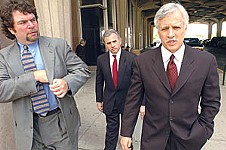 No Clear Winner as Bradley Trial Wraps Up
Will developer's bankruptcy case end with a split decision?