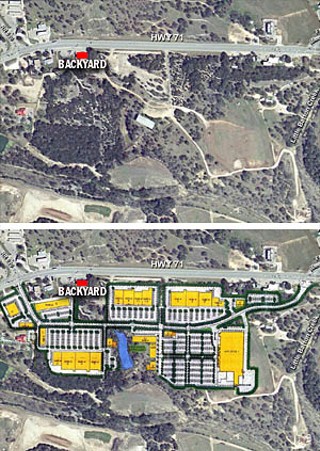 It's not unusual for developers to play the urgency card to try to steamroll their projects through the approval process. But in the case of a heavily opposed retail center in a little burg west of Austin, developers deny that there's any urgency associated with their trying to clear several major regulatory hurdles over the next six weeks. So it must be sheer coincidence that the nip-and-tuck timeline, if successful, would run its course just days before a May 15 election that could drastically alter the developer-friendly makeup of the Village of Bee Cave's governing board.

Developer Chris Milam is partnering with Dallas-based Lincoln Property Co. to build an 88-acre shopping center in Bee Cave – known as the Shops at the Galleria – that the village has already approved once but is now being asked to consider again. Milam insists he's not trying to rush the resubmitted project through its four required hearings before Mayor Caroline Murphy and two aldermen face challengers that have voiced opposition to the project. The opposing candidates have the support of environmentalists and residents from neighboring subdivisions, although a good many of those residents are unable to vote because they live outside the village limits.

The 550,000 square-foot project is particularly controversial because it includes as its anchor a Lowe's Home Centers big-box store on the banks of Little Barton Creek, which flows into its big sister and helps feed Barton Springs and the Edwards Aquifer. By the latest retail standards, this particular Lowe's would be relatively small – 135,000 square feet – but a big box nevertheless. This would be Lowe's second big box over the aquifer and opponents' second boycott drive against the retailer (www.stoplowes.com). The Austin City Council recently passed an ordinance that places a 50,000-square-foot cap on stores built over the aquifer, while grocery stores are limited to 100,000 square feet. The developers began working on the Shops at the Galleria project two years ago, not long after they were forced to downsize their Hill Country Galleria regional mall project across the road after failing to secure upscale retail anchors for the site, as the Village of Bee Cave had required.

Critics of the Shops at the Galleria argue that the proposal should be put on hold until after the election. But the board of aldermen's position is that the project has already been given a protracted public airing, and it's time to move on. On Monday, Milam's revived proposal got another airing before the village's planning and zoning commission, which recommended approval of the zoning and conceptual design.

The board of aldermen will consider the proposal at a hearing at 7pm Tuesday, April 13, at the village administrative building, 13333-A SH 71 W., just west of RR 620. "People have suggested that we wait until after the election, but I decided that wasn't appropriate," said Milam. "I've been standing up there [before the board] for the last two years, and I don't see any reason to duck it now because of an election season."

Milam's project appeared all but dead in February, when District Judge Darlene Byrne halted construction on the project pending a June 28 trial on a lawsuit brought by the Save Our Springs Alliance. The environmental group based its litigation on two allegations: that the construction activity would cause irreparable harm to Barton Creek and Barton Springs and that the village board's consolidation of meetings during the approval process late last year limited public input in violation of open-meetings laws.

Opponents had hoped that the developers' steep financial loss – an estimated $120,000 for every week without construction – would force them to pull the plug on the project before the June trial. Instead, the developers decided they'd hedge their bets by going through the approval process all over again. So Milam and partners reconfigured and resubmitted their application for another round of hearings – an option that Byrne left open in her order. (Regardless, the trial will proceed in June, if only to argue SOS' second claim that the construction would cause irreparable harm to the environment.) "Rather than litigate [the ruling], we decided we could actually get [the project] started six weeks earlier by going through this again," Milam said.

In addition to its legal arguments, the SOS Alliance, which has long enjoyed support within the Austin music scene, has also latched on to another point of contention – that the sprawling Galleria development would wipe out the Hill Country milieu of the Backyard, a live music landmark surrounded by towering oak trees. On that score, the group has stepped up its opposition in recent weeks, with ads including photos (above) of how the Backyard looks now and how it would look surrounded by a retail center the size of several football fields.

Tim O'Connor, whose Direct Events company owns and operates the Backyard, did not return our phone call, and those familiar with the project suggest he's not talking on the advice of his attorney. One key dispute between the Backyard and the retail project centers on how parking will play out, but Milam says that issue has been resolved. How the music venue and the retail center would manage to coexist during and after construction remains to be seen, but Milam says that's not a problem either. O'Connor is "very supportive of the project," Milam says. "We have a very symbiotic relationship." 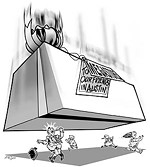