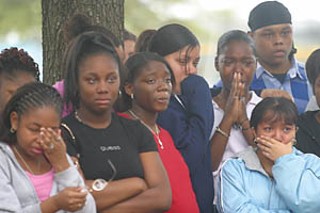 On the eve of the anniversary of the murder of 15-year-old Ortralla Mosley, Reagan High School students, faculty, and staff gathered on March 26 for a morning memorial ceremony dedicated to Mosley and several other RHS students who died last year. Mosley was murdered at the school on March 28, 2003, by her former boyfriend, and fellow RHS student, Marcus McTear. Students and faculty openly grieved Mosley's passing as their peers read poems and shared stories about the well-liked sophomore. "I don't know why this was in God's plan," English teacher Vanessa Connor told the crowd, "but for some reason this is the way the plan was supposed to be. And it's time for us to celebrate her life. She would want us to celebrate her life and not mourn her death, because that's the kind of girl she was." 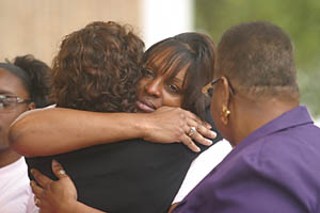 Carolyn Mosley, Ortralla's mother, hugs Connor while Ortralla's grandmother, Carolyn Hutchinson, looks on. "My baby is in heaven smiling down on all of us," Mosley told the students that gathered outside school on Friday morning. "She knows you guys loved her ... and love is unconditional, even after death." Mosley reminded the students to "love each other every day, all day," she said. Mosley said she remembers well dropping Ortralla off at school the day she died. "She looked so beautiful, so beautiful that day," in her shorts and tank top, she told Ortralla's classmates. "Give me those digits girl, you're sure looking good," Mosley said she told her daughter as she walked away. "I appreciated having that kind of relationship with my daughter. My point to you is, treat your parents with some respect, tell them you love them," she told the students. "And, like I said last year, go with peace."