While the schoolhouses burn, the Lege and governor keep right on fiddling 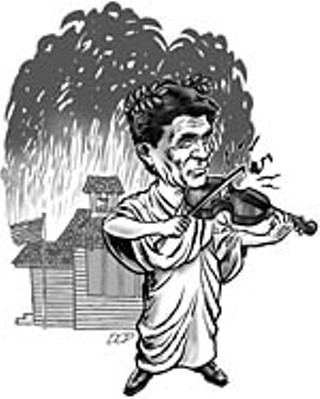 Even by government standards, the Joint Select Committee on Public School Finance report to the Legislature issued last week is a pretty trifling affair. Padded with appendices and delivered in the bullet-point business style that substitutes lists for thought, the report's recommendations barely advance the school finance argument from the committee's original charge, which was in brief (borrowing language from the Texas Constitution) to "establish and make suitable provision for the support and maintenance of an efficient system of free public schools." More specifically, the committee was supposed to consider various long-term funding options "that will substantially increase the state's share of public school funding."

Faced with that august but politically quite inconvenient responsibility, the committee flinched. The report lists the standard options that have been under public discussion for months – increase or expand the sales tax, create a business activity tax, throw in video lotteries and a cigarette tax – but venture no recommendation. And of course the members avoid even a mention of the only revenue option with even a possibility of raising enough money both to sustain the schools and to replace a significant portion of local property taxes: a state income tax, directly deductible from federal taxes. While it's hardly surprising that a committee stacked with slash-and-burn Republicans would shy from taxation, they might at least feel obliged to address the arguments. No dice.

The four Democrats on the 15-member committee – Sens. Eddie Lucio and Leticia Van de Putte, Reps. Vilma Luna and Ron Wilson – couldn't even bring themselves to sign the report, three of the four (always excepting Wilson) saying they don't believe the committee attached sufficient importance to maintaining equity among rich and poor districts. Again, not surprising – except that Sen. Todd Staples, R-Palestine, in a letter appended to the report, also complains about the committee's lackluster handling of the equity issue. The committee's recommendation on recapture (aka "Robin Hood") is terse to the point of absurdity, a single word: "Eliminate." Staples points out that 83 of 88 school districts in his East Texas senatorial district benefit from recapture, and concludes: "Ensuring five school districts ... excel while 83 cannot make the grade is not victory." Since more than 80% of Texas districts (and nearly 90% of the students) also benefit from recapture, "eliminating" the system without planning a serious substitute is simply irresponsible.

It is also politically awkward, with recent polls confirming that a large majority of Texans support additional state funding for public schools – although they don't trust this state government to deliver it.

Gov. Perry so eagerly anticipated the report – supposed to be the blueprint of an upcoming special session – that he managed to be in Italy when it was released. He did stop en route, in Houston, to present his anti-property-tax proposals before an audience recruited for the purpose by right-wing talk show host Dan Patrick. (Patrick, you may remember, organized an anti-tax posse to attend the Lege last spring, denouncing a committee of mostly sedate conservatives as "money-changers in the temple.") Perry said he wants to cap annual appraisal increases at 3%, but otherwise didn't address school finances at all.

So it's not enough that the governor wants the state to sit on its hands and deliver a "revenue-neutral" school finance plan despite a growing school population and increased state accountability mandates. He also wants to handcuff local officials from addressing the growing gaps that the state refuses to fill. The immediate backlash from local officials, most notably the Texas Municipal League, was loud enough to provoke Perry aide Mike Toomey to attempt damage control, insisting that real tax relief must include caps on all local taxes. Of course, the governor's only contribution to the school finance debate thus far is a proposed financial incentive system that would reward high-scoring districts, schools, and teachers – for districts that agree to match state funds locally.

Where does Perry expect they'll get the money? Bake sales and car washes?

The same recent statewide poll that found Texans overwhelmingly in support of more aid for public education (and Perry's approval numbers in free fall) also found them very doubtful that a special session will do much to help. Given the governor's pandering to the anti-taxers and the Lege's unwillingness to make hard financial choices, it's not surprising that citizens, like teachers groups, are increasingly skeptical that a special session will do anything but make matters worse.

Indeed, as lukewarm as the committee report is about serious tax reform, it's enthusiastic about "accountability," "efficiency," and "performance incentives," as though the members had just returned from a marketing seminar. In the interest of better schools, for example, the committee recommends eliminating the prevailing wage requirement for contractors – apparently, undermining the wages of working people will somehow help their children be better educated. They also want to make it easier to fire teachers and to loosen the current limits on class size – one of the Perot-era reforms proven to actually work. The so-called performance incentives – essentially a headline-grabbing way of dodging more substantive financial responsibilities – would also diminish teacher and staff solidarity by rewarding a handful of "stars" while the rest stand in line.

The preliminary report of the House Select Committee – even more heavily stacked against public school advocates – repeats these dismal nostrums and adds a few of its own: the "freedom scholarship program" (i.e., vouchers, which have been repeatedly rejected by the full Lege); more "home rule" districts (anticipating modification or even secession from the state finance, accountability, and employment standards); radical revision of employment rules to further undermine job security for teachers ... and so on. Few of these proposals even address the school finance system, and instead express the determination of reactionary lawmakers, led by Arlington Republican Rep. Kent Grusendorf, to further weaken a public school system they already despise.

There will likely be a special session, because the governor needs one and the courts say they'll wait to see if the Legislature will act before they hear the pending Robin Hood lawsuit. But based on the preliminary signs, we should not expect much leadership from those elected to lead.

What's So Special?
Will Perry's lege session come down to taxes vs. kids ... lose-lose?