Texas lawmakers may be light-years away from allowing same-sex marriages, or even civil unions for that matter, but a new gay rights group hopes to add Austin to the list of cities taking a stand on the hot-button issue. The Austin Coalition for Marriage Equality, or ACME, intends to petition the Austin City Council and the Travis Co. Commissioners Court while it continues to drum up community-wide support for gay couples tying the knot with the benefit of a marriage license.

Toward that end, students from Bowie High School and from Huntington-Surrey, a private alternative high school, are organizing ACME's first Don't Outlaw Love rally this week. ACME members and supporters will gather at the south entrance of the State Capitol at 4:30pm Friday and march to the Governor's Mansion at 5pm. "This is a fight that everyone should be involved in, gay or straight," says Will Martin, a Huntington-Surrey student activist, who last year took part in local anti-war demonstrations.

ACME member Dana Cloud, a UT professor, says she'd like to see the coalition involved in sit-ins and other actions of civil disobedience reminiscent of the civil rights struggle of the Sixties, although some African-American leaders across the U.S. have stated their personal opposition to such a comparison. Liz Brenner, a recent UT law school graduate and ACME co-founder, says a resolution is currently being drafted, which will be submitted to both the council and the commissioners in a couple of weeks.

Randall Ellis, executive director of the Lesbian/Gay Rights Lobby of Texas, applauds the local effort but says his group will continue concentrating on "the big picture" – the state Legislature and the federal constitutional amendment proposal that would ban gay marriage. He says he fully expects the big battle in the 2005 legislative session to be a state constitutional proposal banning gay marriage. "More states are passing constitutional amendments to avoid a situation of what happened in Massachusetts," he said, and it goes without saying that the Lone Star State will want to put its amendment on the fast track. Texas legislators "don't like the idea of other states being more discriminating than they are," he said.

ACME will hold its next regular meeting at 6:30pm Monday at the Spider House coffee shop, 2908 Fruth, just south of 29th. 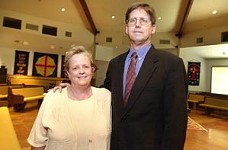 The Rev. Rigby Welcomes Same-Sex Showdown
The St. Andrew's pastor says a Presbyterian trial is 'what needs to happen'