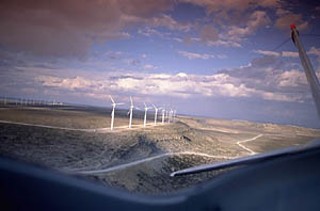 An ill wind is blowing for an Austin renewable energy company. Cielo Wind Power, in its attempt to build itself into a clean-energy leader, has relied for the past few years on federal production tax credits to make it competitive with more traditional energy companies. Those credits expired in December while Congress wrangles over the federal energy bill, which contains provisions to extend the credits. Without them, Cielo and other renewable energy related companies are stuck and can't make any plans for future projects until they know the credits are coming.

"Right now, it's a weird position where you get support and tax incentives for building a gas plant or a coal plant, but if you build a wind plant you don't get anything," says Cielo President Walt Hornaday. "It's put our company in a position where we hear both Republican and Democrat support in Washington for these production tax credits, but they aren't officially done, so we've really stalled our work for 2004 and beyond for almost a year, because you have to do a running start to get your projects done once they come back into law, then it takes you close to a year before you can actually get a project built to capitalize on that."

The result has been brutal. "Our company used to build somewhere on the order of 200 megawatts of projects a year, and now we're having to reduce our staff to work through the scenario of doing nothing in 2004," says Hornaday. "We do have an operating group in our company that operates existing projects and a core staff that we keep around no matter what, but we definitely had to probably trim by about a third of our staff." Hornaday noted that the major project being stalled at the moment is one that would deliver 40 megawatts of electricity to Austin Energy.

An irony in this situation is that the energy bill holdup is partly due to the efforts of environmentalists – who are also rabid supporters of the renewable energy industry. The bill is "overwhelmingly stacked in favor of the fossil fuel industry, and while we need to have the production tax credit, we just can't accept the billions of dollars in subsidies for the coal, oil, and nuclear industries," said Luke Metzger of the Texas Public Interest Research Group. "It's a disaster."

Metzger said TexPIRG is worried about the effect on the clean energy industry, "but we just decided that when you look at how bad this bill is, it's just not worth the trade-off. It's disappointing that wind producers have to be grouped together with this otherwise terrible bill." He added that environmentalists are hoping to get the tax credits renewed in a separate bill.

In the meantime, Cielo will have to try to weather the storm. "We're a resourceful company," Hornaday says. "Any type of bone they'll throw us we'll run with."