Sprawl and security are emerging as areas of potential controversy for the draft $420 million bond package the Citizens Bond Advisory Committee is preparing for the Austin ISD's board of trustees. Voters will consider the package, which would fund capital improvements to AISD's $1.2 billion in facilities, this fall.

The package addresses widespread overcrowding by recommending five new elementaries and one new middle school, costing $115 million. The proposals will no doubt be welcomed by many parents in fast-growing south and northeast Austin. However, environmentalists wonder if the district is doing all it can to direct student flow into parts of Austin that are already developed, rather than promote further sprawl, particularly over the Edwards Aquifer. Sites have been chosen for only three of the six schools. Bill Bunch of Save Our Springs Alliance says his group will push the district to locate the other three schools inside existing residential development, rather than at its perimeters. For example, his group would oppose a new elementary school in the Bear Lake Public Utility District, on the border of Hays Co. "It's on the very extreme outer edge of AISD boundary in an area that's completely undeveloped," he said. "It's a sprawl-inducing expenditure."

Another area that has raised concerns is the $19 million devoted to "safety and security." Public support has been strong for such proposals as improving outdoor lighting and redesigning traffic-clogged drop-off zones. However, the committee's call for investment in high tech security equipment has raised some eyebrows.

After interviews with campus police and principals, the CBAC recommended equipping all AISD schools with security cameras and a card-access entry system. They believe cameras will act as a deterrent and as a way to catch troublemakers, while the cards will enable schools to know exactly who is entering and leaving the facility and make it harder for unauthorized visitors to gain entry. These additions would augment existing security provisions, which include a police officer stationed at each high school, security guards at each middle and high school, external cameras at all high schools but four, and interior cameras at Reagan and LBJ high schools.

The Community Safety Task Force – a citizens' group appointed by Superintendent Pat Forgione after the murder of student Ortralla Moseley at Reagan High in April 2003 – reviewed the recommendations, and offered only minor tweaks, costing about $3 million. (These included things like additional lighting and parking, and funding support staff to maintain the security systems.) However, Celia Israel, one of the task force's co-chairs, says she's concerned that facilities-related security expenditures (the only kind a bond package can address) might draw attention from less tangible ways to make schools safer. "We don't want anybody to be lulled into a false sense of security because there's cameras or security access points going into the school," she said. "Most of the problems in schools don't come from outside intruders. It's kids doing bad things to kids, and those are problems surrounding the human condition, not surrounding the quality or number of cameras."

Amy Averett, executive director of Austin Voices for Education and Youth, would go further: She believes surveillance can actually detract from safety. "I understand that security has to be a really first and foremost concern for the school district, but I think surveillance strategies really do alienate students, and can be counterproductive if part of what we need for a healthy school environment is to create trust," she said.

Indeed, students told the task force they found cameras not only alienating, but ineffective – hats and hoods, for instance, make it easy to disguise your identity. What they said they wanted were more opportunities for positive interactions with adults and people to whom they could turn with problems. Consequently, the task force will emphasize this sort of strategy – through recommendations such as more counselors and better mental health services – in the full report they will deliver to the board April 12.

However, Paul Turner, AISD's director of bond development and execution, says security systems are simply a complement to human-centered approaches. "We understand that interacting and working with kids is the best way to improve safety," he said. "But this gives schools the tools to stretch their human resources further."

The public will have further opportunity to comment on the draft bond package once the CBAC delivers its recommendations to the board of trustees March 29. 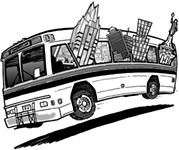 Austin @ Large: Lesson Planners
All I need to know about cities, I learned in kindergarten