For reasons local and national, Travis Dems throw down a November challenge

A myth exploded: Elephants do forget. And another confirmed: Donkeys really are pretty stubborn. A few short years ago, when Travis Co. gaily followed the rest of the state in supporting then Gov. George W. Bush and still Sen. Kay Bailey Hutchison, the air was thick and rank with assertions and predictions that Austin's days as a Democratic bastion were numbered, at least as long as the city and county remained predominantly Anglo.

Last week, Travis Co. Democrats responded something like this (to borrow a bon mot from the Redistrapublicans' summer of love): "HAHAHAHAHAHAHAHAHAHAHAHA." Democrats outnumbered Republicans at the polls March 9 by a factor of, to be precise, 2.3-to-1; while 41,696 Travis Co. residents voted for John Kerry (only 65% of the total D presidential vote), only 26,084 voted for George W. Bush (nearly 93% of the R vote, the rest going to everyone's favorite son, "Uncommitted.")

Certainly, it's apples and oranges to compare turnout figures and results in the separate primaries to the numbers we'll see this November, and we all know that no matter how much Travis Co. loves (or not) John Kerry, Texas' 34 electoral votes are going the other way. But the supposed futility of the Dem cause in Texas is just as salient now as it will be in eight months. If any primary season would seem to be ordained to culminate in low turnout, it would be this one. The opposite happened – the highest Dem turnout in 15 years. (The effect was less conclusive statewide, with laments over low numbers in Houston and elsewhere.)

This may not be such grievous news for the Bush-Cheney campaign, but it's plenty bad news for the Travis Co. GOP – and in particular for the party's darling little twin boys, state Reps. Jack Stick and Todd Baxter. Both of their Dem challengers – Mark Strama and Kelly White, respectively – ran unopposed in districts designed to lean Republican. But both Strama and White still got more votes last week than did the incumbents. If local Republicans are equally unmotivated to take the time to vote in November, knowing that their Strong Steady Leader has Texas in the bag, Stick and Baxter – who won in November 2002 by nearly 14- and 7-point margins – will end up losing this time by similar margins.

Last week's results suggest forces that are working more deeply and broadly than many observers, including me, may have initially concluded on Election Night. Yes, it's true that U.S. Rep. Lloyd Doggett, facing what just days before had seemed (to many, including him) a neck-and-neck battle for survival, poured on a get-out-the-vote effort that helped buoy the high D turnout. But only a third of Travis Co. lies within Doggett's new CD 25, and while Dem turnout in East and Southeast Austin was indeed much higher than normal, and much higher than most anywhere else, those precincts always prefer the D's by several orders of magnitude. (Central and East Austin have kept Dems in power at the courthouse for at least the last two election cycles.)

But Democrats outpaced GOP turnout in all three of Travis' congressional districts, two of which were uncontested on the D side; in all six of its House districts, none of which was contested on the D side; and the precincts of all four county commissioners, two of whom weren't even on the ballot. Certainly, the countywide races – for sheriff and especially for 200th District Court – offered their share of voter interest, but the GOP had some of those, too.

Indeed, the turnout may be making some local Dems question their willingness to write off without a fight the races for CD 10 and CD 21, for Terry Keel's House District 47, and for Gerald Daugherty's Precinct 3 seat on the Commissioners Court. The GOP was unwilling to write off CD 25, but Becky Armendariz Klein has a row to hoe almost as long and narrow as the district itself. Despite her glib assertions on Election Night that she could pick up the Hinojosa (that is, Hispanic) vote, at least in Travis Co., Doggett outpolled Hinojosa and Klein combined by a factor of 4.7-to-1.

Something else is apparently at work, something that suggests the cynical hubris of the GOP leadership may now be touched by nemesis. Faced with effective disenfranchisement and supposed irrelevance, Travis Co. Democrats did not go play Frisbee with their dogs; they stormed the polls to send a message – about redistricting, about Tom DeLay, and about Bush and his reign of error, more so than about the choices actually before them on this ballot. Some of this reflects the Zeitgeist of a revitalized national Democratic Party (particularly here, where Howard Dean still came in third, even after exiting the race before the start of early voting); people made time to vote in the same way, and for the same reason, that they stood in the pouring rain for an hour to see anti-GOP documentaries like Bush's Brain and The Hunting of the President at SXSW. Democrats care about what's happening in politics, right now, in a way that hasn't been true locally since Ann Richards' 1990 triumph.

Meanwhile, at the apex of their imperium, Republicans grew lazy and complacent and stayed home even in their strongest boxes. Those who did vote toed the party line, siding with incumbents and the occasional anointed challengers (like Paul Green over Steven Wayne Smith) even when Republicans elsewhere in the state did otherwise. For example, if there is a GOP bias against Hispanic candidates – the reason offered two years ago for Smith's Supreme Court triumph – it doesn't exist here; Railroad Commissioner Victor Carrillo won outright in Travis, as did 3rd Court of Appeals candidate Ernest Garcia. (Garcia lost to Bill Green in the other 15 counties in the 3rd Court district; Carrillo is now in a statewide run-off.) But for the first time I can remember since tracking box-by-box election results, some normal-sized Travis Co. precincts registered not one GOP vote in this election.

As often happens when turnout is unexpectedly high – particularly in precincts where voting is for most, at best, a very occasional habit – the rich got richer on the Democratic side. Few observers are surprised that Gisela Triana, Nancy Hohengarten, Greg Hamilton, and Ron Davis won, but few predicted such huge margins of victory and outright wins without run-off, for any of them, let alone all of them.

In Davis' case, the Precinct 1 commissioner – who escaped a run-off with Celia Israel by 256 votes – probably can thank Doggett directly. About half of Precinct 1's voters live within CD 25. (Almost all of the rest in CD 10; the UT campus boxes, which voted as anemically as always, lie within CD 21.) But turnout in the CD 25 half of Precinct 1 was twice that of the other half – more than 20% – and Davis won there by 30 points. This isn't entirely an ethnic effect; plenty of African-Americans live in CD 10, and plenty of Anglos and Hispanics in the CD 25 half of Precinct 1. Elsewhere, both Israel (who, for what it's worth, won the UT boxes) and Kathy Bedford Smith held Davis well below the 50% mark; had turnout been even throughout Precinct 1, the race would have finished much closer to a three-way tie.

But the Doggett Effect was much more limited in the other big-ticket Dem races. In the nasty, nasty 200th District Court race, Triana did indeed do much better in CD 25 than elsewhere, but she won everywhere; only in the Northwest (House District 48) did challenger Jan Soifer hold her below 50%. (This may reflect Soifer's longtime leadership in the local Jewish community, which is traditionally most active in the Northwest, since she didn't do notably well in the other GOP-leaning House districts.) Higher overall turnout helped Triana, but her extrastrong results in CD 25 (and, especially, in House District 51 in the Southeast) may reflect the same ethnic advantage that Hinojosa sought and failed to capture; Triana now becomes Travis Co.'s first Hispanic female district judge.

Conversely, in the race to succeed Triana at County Court-at-Law No. 5, Nancy Hohengarten – who had the best results of any countywide Dem candidate in a contested race – did least well in CD 25, where her two Hispanic opponents (particularly Leonard Ray Saenz) pulled their best numbers, again largely in House District 51. Without the Doggett Effect, she might have parlayed her ample advantage in endorsements into nearly 80% of the vote – not that she has any reason for regrets.

In the sheriff's race, Greg Hamilton pulled nearly identical numbers in all three congressional districts, though in House districts 47 and 51, his opponents – particularly, and unaccountably, Raymond Frank – held Hamilton, the designated heir to retiring Sheriff Margo Frasier, below 50%. Interestingly, the GOP sheriff's race likewise showed surprisingly little variation from box to box, although Precinct 3 Constable Drew McAngus did understandably better in his Southwest home turf, and Joe Martinez picked up his strongest numbers in the Hispanic boxes in the Southeast – where GOP turnout overall was less than 2%. The battleground in the run-off would seem to be District 50, where McAngus and Duane McNeill fought to a near-tie.

The same boxes will also be ones to watch in the GOP run-off for CD 10. While the crowd of conservatives in that race certainly didn't inspire unusual turnout the way Doggett did, it is noteworthy that favorite son Michael McCaul's Travis Co. support – strong enough to vault him into a run-off with Houstonian Ben Streusand – was concentrated in the more liberal central-city portions of the local CD 10 zone, the boxes that lie within House districts 48 and 49. Voters in Northeast Travis Co. (House districts 46 and 50) were much more likely to give their votes to Streusand, or out-of-the-running challengers Dave Phillips and John Devine. In an April GOP run-off that probably won't draw enough voters to keep the election judges awake, those social-conservative types are likely to show up, um, religiously at the polls, just as they did two years ago to hand a run-off victory to theoretical underdog Jack Stick. (Who, if he has a brain in his head, must be kicking himself over his decision not to run for Congress.)

In the one Democratic race heading for run-off – the Precinct 4 constable contest – it's harder to divine Doggett's impact, since nearly 80% of that contest's votes came from within CD 25. Incumbent Maria Canchola did much better against challenger Leticia Lugo in her central-city boxes (those within HD 49) than in the Eastside and Southeast, which might suggest Canchola was helped – perhaps enough to survive to run-off – by Doggett turnout in places like Travis Heights. But clearly, some people voted for Doggett and for libertarian activist and faux Democrat Mike Hanson, confusing and horrifying though the thought may be. 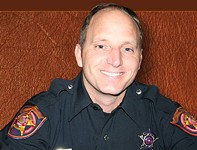