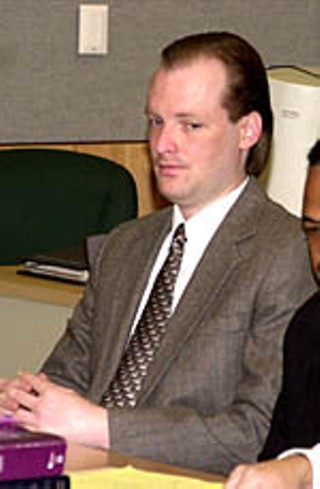 Attorneys for Robert Springsteen and Michael Scott, the two defendants convicted in the 1991 yogurt-shop murders, claimed a victory on March 8 when the U.S. Supreme Court issued a unanimous ruling that reaffirmed defendants' Sixth Amendment right to confront witnesses – which could throw both cases back into the lap of Travis Co. District Attorney Ronnie Earle. "I think it would be a terrible embarrassment for any appellate court at this point to do anything but reverse [the yogurt-shop verdicts]," said Mary Kay Sicola, appellate attorney for Springsteen, who was sentenced to death in 2001 for his role in the murders. "I don't think they can do anything about it. I think the wiggle room is gone."

On Dec. 6, 1991, four teens were found inside an I Can't Believe It's Yogurt shop on Anderson Lane, stripped, bound, gagged, shot in the head, and horribly burned in a fire police said was started in order to cover the crime. Indictments were not brought until eight years later. Springsteen was tried, convicted, and sentenced to death in 2001; Michael Scott was convicted in 2002 and sentenced to life behind bars. A third defendant, Maurice Pierce, was indicted by a grand jury, but last year Earle dismissed those charges, claiming insufficient evidence to secure a conviction. In 1999 the case against Forrest Welborn – who prosecutors said acted as a lookout for the other three – was dropped after two Travis Co. grand juries failed to indict him.

The state's case against the four was almost entirely circumstantial. No physical evidence connected any of them to the grisly murders – indeed, DNA evidence collected at the scene does not match the slain girls, the four defendants, or any other yogurt-shop employees. As a result, prosecutors relied almost entirely on the individual "confessions" that Springsteen and Scott each made during marathon interview sessions with Austin police in September 1999 – during which Springsteen and Scott, separately, incriminated not only themselves but also each other as participants in the murders.

Springsteen and Scott were tried separately, but in each case prosecutors used the same strategy, offering as evidence not only each defendant's "confession," but also salient portions of the other defendant's statement, to "corroborate" details and support the state's theory of the case. Neither defendant could be compelled to testify in person, and thus be subject to cross-examination, without violating his Fifth Amendment rights. But in each case District Judge Mike Lynch allowed the statements into evidence, despite vociferous objections from the defense attorneys, who argued that the statements violated Springsteen and Scott's Sixth Amendment rights to "confront" the witnesses testifying against them.

The Sixth Amendment argument is the legal issue at the heart of both Springsteen's appeal, now pending before the Texas Court of Criminal Appeals, and Scott's case, filed with the state's 3rd Court of Appeals. And last week, the amendment's Confrontation Clause was the subject of a unanimous U.S. Supreme Court opinion in a case known as Crawford v. Washington. "Where testimonial statements are at issue, the only indicium of reliability sufficient to satisfy constitutional demands is the one the Constitution actually prescribes: confrontation," Justice Antonin Scalia wrote in the Crawford opinion. This decision reverses 25 years of Supreme Court precedent outlining exceptions to the Confrontation Clause, including those relied on by Earle's prosecutors in the yogurt-shop cases.

In the Crawford case, a Washington state trial judge allowed prosecutors to enter into evidence a statement made by Sylvia Crawford, the wife of defendant Michael Crawford – on trial for attempted murder – which contradicted slightly her husband's account of what led up to his stabbing another man. Under state law, she could not be compelled to testify against her husband, but prosecutors argued that her statement, made to police, was an inherently reliable "testimonial" statement, allowable under the exceptions to the Confrontation Clause.

Since 1980, the Supremes have held that certain statements are admissible without confrontation, if deemed reliable by the trial judge – either because they fall within a "firmly rooted hearsay exception," or, as the trial court held in Crawford, because they bear "particularized guarantees of trustworthiness." (In Crawford, the state argued that most of Sylvia Crawford's statement corroborated her husband's testimony.) In its opinion last week, though, the Supreme Court reconsidered and decided that confrontation is the only constitutional guarantee of reliability. "Dispensing with confrontation because testimony is obviously reliable is akin to dispensing with jury trial because a defendant is obviously guilty," Scalia wrote. "This is not what the Sixth Amendment prescribes."

To Sicola, the meaning of the court's ruling is clear: The trial court was wrong to allow portions of Scott's testimony into evidence during Springsteen's trial. "[T]he State introduced the redacted 'confession' of ... Scott, a non-testifying co-defendant," she wrote in a March 8 letter filed with the CCA. "Scott's statement, given in response to police interrogation, is testimonial hearsay under Crawford. Crawford, therefore, resolves the inherent tension between the right to confrontation and hearsay exceptions ... and requires a finding of error." There is, she says, no way around it – a view shared by Springsteen's trial attorney, Jim Sawyer. "This means an end to ... courts letting in the unexamined testimony of [a nontestifying witness]," he said. "It's obvious that [practice] is standing the Constitution on its ear."

Scott's trial attorney, Carlos Garcia, was slightly more skeptical: "You never know how [the appellate] courts will rule," he said, pointing out that the state is likely to argue that the yogurt-shop cases are different from the Crawford case. "I think it was the right decision by the Supreme Court," he said. "But the state will probably try to distinguish the cases."

Indeed, that is the position of the Travis Co. DA's office, said Bryan Case, head of the office's appellate division. "The Springsteen case is very different on the facts, because the statement of Michael Scott, introduced in the Springsteen case, is the statement of ... Scott saying that he, Michael Scott, was guilty," Case said. "He is not pointing an accusatory finger at Springsteen. That is our position." The DA argues that because prosecutors redacted Springsteen's and Scott's statements so that, as introduced in each other's trials, they reflected only their own guilt in the crime, the two cases will not be affected by the Crawford ruling. Rather, the self-incriminating portions of the "confessions" are considered statements against "penal interest," a different kind of firmly rooted hearsay exception that does not require a judge to determine whether they are "reliable" in order to skirt the Confrontation Clause.

Sicola naturally disagrees: The redacted Scott confession introduced at Springsteen's trial (and Springsteen's as introduced at Scott's) was a "testimonial" statement made to police and therefore, under Crawford, a statement that requires a reliability determination in order to supersede the Sixth Amendment. "Of course [the prosecutors are] going to say [otherwise], and that's as ridiculous as it gets," she said. "The Supreme Court has said that the only measure of reliability is, did you get to cross-examine the statement? And the answer is no."