Major figures in the Tomstown Scandal on the record 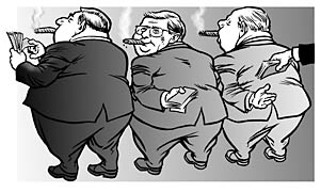 "They both got what they wanted. Craddick got to be speaker, and Tom DeLay got a new [congressional] map." – Craig McDonald, Texans for Public Justice

"It never ceases to amaze me that people are so cynical they want to tie money to issues, money to bills, money to amendments. [The money goes] to people who think the same way we do in the first place." – U.S. Rep. Tom DeLay, R-Sugar Land

"I hope you will consider asking your colleagues in the insurance industry to write a check for $50,000 or $100,000 to the voter education project. Contributions for this purpose are not reportable." – Bill Hammond, TAB president

"Mike is very engaged politically, very insightful politically. I think he saw an historic change that was coming to the House, and he wanted to be a part of it." – TRMPAC director John Colyandro, on 2002 meetings with Bill Hammond and Texans for Lawsuit Reform lobbyist (now chief of staff to Gov. Rick Perry) Mike Toomey

"The Texas Association of Business blew the doors off the November 5 general election using an unprecedented show of muscle that featured political contributions and a massive voter education drive." – TAB newsletter, 2002

"They are asking us to believe in the tooth fairy, and there is no tooth fairy in politics. It takes a great leap of faith to believe the key operatives were not sharing information and coordinating resources to accomplish their admitted common goal." – Craig McDonald

"Communication is not coordination." – Andy Taylor

"It has been a crime under Texas law for corporations to contribute money to political campaigns since the days of the robber barons. There's a reason for that. If we have reached the point where a corporation can secretly buy an election, then democracy is on life support." – Ronnie Earle