Bill Gates wants to tax your e-mail, and the Bush administration finds the science it wants

To the barricades, people! Here come the money-grubbers, trying to get their hands on one of the few small freedoms that are still essentially free in our world: sending e-mail.

None other than Bill Gates, the emperor of Microsoft's virtual kingdom, has acknowledged that his monopolistic corporation, the largest e-mail provider in the world, is trying to develop an e-mail stamp. Apparently, he's trying to be the global post office of the Internet. Microsoft is conspiring with Yahoo Inc., the second largest e-mail provider, to work out the technological kinks to make it possible for them to create a virtual stamp – actually an encrypted code number – so they can assess a fee for each e-mail, probably starting modestly with a penny per message.

Excuse me – Bill Gates is the richest human on the planet, with more personal wealth than some nations, yet he feels the need to collect a penny from each of our e-mails?

No, no, say the minions of Microsoft and Yahoo – this is something we want to do to help you; it's for your own good!

They're cloaking this sneaky stamp tax with a claim that they're just wanting to stop those dastardly spammers who fill our e-mail boxes with electronic junk-mail hawking all sorts of products and services. "There is not enough friction in sending e-mail," says a Yahoo operative, and the plan is to apply friction at a penny a pop. Of course, while couching this as a noble public service, the corporations would be creating an endless new revenue stream running right into their pockets.

Company executives say that you and I shouldn't fear this e-stamp, because, initially, they'd only require the big bulk users of e-mail to pay this corporate assessment of postage – not us. Pardon my skepticism, but Microsoft and Yahoo are not altruistic entities, and their long records of profiteering suggest that once they get the technology in place, they'll milk us consumers for all they can get.

POLITICKING TILL THE COWS COME HOME

The Bushites and their corporate sponsors are quick to demand that "science, not politics" should be the sole basis for making regulatory policies. Of course, the question is: whose science – the corporate-funded "science," or the genuine product of independent scientists?

For example, after a Mad Cow outbreak last December, a panel of international scientists was convened by Agriculture Secretary Ann Veneman to review America's beef production system. She expected the panel to rubber-stamp the beef industry myth that America has no real Mad Cow problem and that our safety rules are more than adequate.

But – Holy Big Mac! – the panel found that Mad Cow disease is common in our cattle herds, that the USDA's voluntary tracking system is grossly inadequate, and that the meat industry's method of feeding rendered hogs, chickens, and other animals to cattle is inherently unsafe. It called for a major strengthening of the regulatory system.

The Bushites and industry respond to this scientific finding by playing politics. Industry lobbyists blindly reiterated the absurd claim that Mad Cow "poses no risk to consumers," decried the scientists' report as "negative in tone," and asserted that the best policy was not to get regulators involved, but "letting the industry address these things."

The Bushites bowed to the politics, stiffing the science ... and us. Why? Because they are the industry. Secretary Veneman previously was a corporate agribusiness lawyer and lobbyist – and now her chief of staff, her top spokeswoman, and the head of her agency's regulatory programs all come from top positions in the National Cattlemen's Beef Association, the industry's main lobbying front.

Did I mention that meat processors and corporate cattle operators have put nearly a million bucks into Bush's presidential campaign? The Bushites can talk about "science" till the cows come home, but their policies are all about politics. 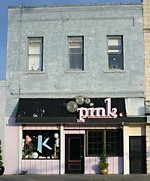 After a Fashion
Where will Stephen make over Carole Keeton Etc. Etc. now that Pink is closing?