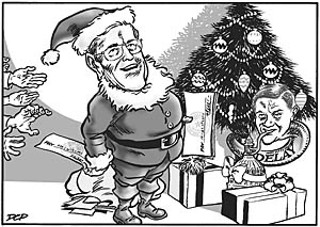 "This is going to be bigger than Sharpstown."

That's a quote often heard this week among Capitol observers with particularly long memories. For the rest of us, "Sharpstown" refers to a Texas political scandal more than 30 years ago whose fallout included a remarkable turnover among elected officeholders and a consequent legislative effort to clean up state politics. It's frankly far too early to determine whether the current swirl of subpoenas with which Ronnie Earle has papered the Capitol will result in the sort of upheaval produced in part by another Travis Co. district attorney, R.O. "Bob" Smith, in 1972.

The scandal got its name from Houston businessman Frank W. Sharp and his Sharpstown State Bank. Sharp wanted some favorable legislation for the bank and its corporate sibling, the National Bankers Life Insurance Corp. So in time-honored Texas fashion, in 1969 he came down to Austin for a special legislative session and bought himself some politicians. According to a U.S. Securities and Exchange Commission lawsuit – and a subsequent indictment brought against House Speaker Gus Mutscher of Brenham, Mutscher's aide Rush McGinty, and state Rep. Tommy Shannon of Fort Worth – Sharp had arranged unsecured loans from his bank to allow numerous officials to buy stock in the NBLIC. When Sharp then artificially inflated the price of that stock, a whole bunch of pols made out like bandits.

Mutscher, McGinty, and Shannon became known as "the Abilene Three" when their case was tried there, and only they were convicted of any crimes (specifically "conspiracy to accept bribes," for which they received fines and probation). But several other officials were politically tainted by real or imagined connections to Sharp: Mutscher was finished (to be replaced by Price Daniel Jr.), and in the 1972 elections Lt. Gov. Ben Barnes and Attorney General Crawford Martin were each defeated by "reform" candidates Bill Hobby and John Hill. They were accompanied into exile by many of their legislative fellows. Gov. Preston Smith himself, who had been named at trial as an "unindicted co-conspirator," found himself tossed out (after a valiant run by Houston liberal Frances "Sissy" Farenthold) in favor of Dolph Briscoe, thus again proving we should always be careful what we wish for.

It's worth recalling that Frank Sharp himself may have had the biggest beef – against Gov. Smith, who vetoed the suspect legislation (which would have required the state to insure big deposits in Sharp's bank), but only after he had already cashed in on the insider stock deal. Smith (who insisted to his death that it was all just bidness-as-usual) seemed not to understand the time-honored definition of an honest politician: Once you're bought, you're supposed to stay bought.

That brings us to current Speaker Tom Craddick's defense of his disbursement of some $152,000 in corporate checks (courtesy of Union Pacific) to the campaigns of House candidates prior to the fall 2002 election. In addition to potential violations of Texas' ban on corporate funding of elections, Craddick's courier service may also have flouted the post-Sharpstown prohibition on providing "anything of value" to House members in potential exchange for a pending vote in a Speaker election. Craddick's lawyer Roy Minton and his spokesman Bob Richter have each insisted there was no "quid pro quo" for the money – Craddick simply had more time on his hands than those busy UP lobbyists – and in any case, he already had the speaker's race sewn up. Why pay for something you already own?

One needn't conclude that Craddick had explicit bribery on his mind when he just happened to drop by with his Secret Santa presents, nor even that a "quid pro quo" (not apparently necessary under the "speaker statute") was ever mentioned. Craddick had ample reason to want to ensure not just a GOP majority in the House, but the overwhelming and submissive majority with which he in fact became speaker. Too many ABC ("Anybody But Craddick") Republicans would not only endanger his rule, but make it more difficult to guarantee the radical legislation (uncompromising tort reform, re-redistricting, etc.) sought by the folks in the owners box, before which more moderate and less docile Republican lawmakers might blanch.

However else the current tableau might eventually compare to Sharpstown, it does not (yet) appear driven by the desire for personal enrichment. The questions now under investigation by the district attorney and a grand jury – first raised by Texans for Public Justice nearly a year ago – are complex in detail but fall into four broad categories: 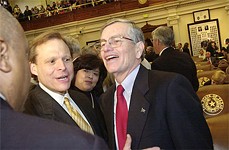 Who Wants to Be 'Anybody but Craddick'?
A front-runner has yet to emerge to defeat Craddick 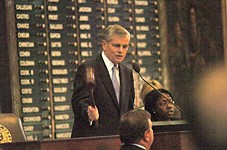 Quorum-Buster Ponders Craddick's Fate
Will the House Speaker keep his job, or will the Craddick casualties see him get his comeuppance?