'It's Time to Give Them Another Jolt'

An interview with Ralph Nader

Tweet
print
write a letter
On Wednesday, Feb. 25, newly declared presidential candidate Ralph Nader passed through Austin on the campaign trail and delivered two speeches on the UT campus. Prior to his public appearances, he spoke to The Austin Chronicle about his decision to run for president.

Austin Chronicle: Do you think your candidacy will help build a progressive movement?

Ralph Nader: It always does. You never want to sit out a presidential election, when you think you can expand civic and political energies for a progressive future. The struggle for justice never gets put on adjournment – except by people whose expectation levels are so low that they'll settle for two parties that both have flunked, although one is worse than the other.

AC: This time it seems to me the negative reaction to your running is stronger than 2000, and not only from the "liberal intelligentsia" or The Nation or The New York Times. Clearly more than 2.7 percent of the people, your 2000 percentage of the vote, in this country support the things you've fought for – yet in terms of presidential elections, the entire culture seems to say, "These are our possibilities, this is all we have." It makes the movement you represent seem much more marginal than it actually is.

RN: We're all hostages to an electoral college, winner-take-all system that forces people to go and vote for the least-worst. If we continue to be hostage, and don't try to fight that system, through fundamental electoral reform from the outside and from inside the electoral system, it will drag us over the cliff. Both parties are being pulled by corporate interests in one direction, and there's no pull in the other direction. So obviously, every four years, both parties are going to get worse. They're going to be corporatized and more unable or unwilling to consider the necessities of the American people.

AC: In practical terms, what do you hope to accomplish between now and November?

RN: A lot. One is getting out more votes, pushing the broader agenda, educating some of the media to be more demanding of the two candidates whose campaigns they get bored stiff covering every day, pushing the Democrats to more progressive positions, getting a lot of young people activated, and of course, building for the future – always building beyond November '04. How can you build a movement if you're not willing to start? That's what they're saying to us – the liberal intelligentsia is saying, "Don't start!"

Well, they've been saying that since 1980. They said it in '84 with Mondale, they said it in '88 with Dukakis, Perot saved them in '92, when he harmed Bush more than Clinton. Basically, the Democrats have been on an unbelievable losing streak, and in the last 10 years they've lost local, state, and national elections at an accelerated level, to the extreme wing of the Republican Party. They can't even beat the extreme wing of the Republican Party – bought lock, stock, and barrel by multinational corporations. That shows you that they are in serious trouble, and instead of relaxing and rejoicing [for a candidacy] that's going to push them toward their finer historic traditions in terms of policy-making and policy-implementing, they're whining and they're carping, and they're trying to censor.

European political observers can't believe what's going on here. In Canada and Western Europe, you never say to a candidate for a small party, "Stay out the race."

AC: But they've got parliamentary systems.

RN: So what? We have the First Amendment rights of free speech, free petition, and free assembly. I'll stack that up against any of their incentives for pluralistic politics. We have to take that very, very seriously. The country is being taken apart and being dragged down by two corporate parties who are competing for the same dollars, and who look at their positions as sinecures free from electoral competition from each other, as the two-party duopoly trends toward one-party districts. That's what's happening all over the country – not just congressional, where 95 percent of the seats are virtually one-party districts. Forty percent of the state legislative seats are held by incumbents who are not challenged by the opposing major party. In Massachusetts, it's 60 percent. So the logic of two-party duopoly is not even to give us a two-party system – it's trending to cutting up the country into one-party districts. That is a real undermining of any semblance, any myth of political choice.

AC: The issue that most defines this year is the Iraq war. In terms of votes [for the war], there isn't much difference between Bush and Kerry – Bush has already begun to beat up Kerry on that score. In terms of the voters, though, I think there's this sense that the only hope to prevent either more war or expansion of war is a Democratic president. Do you think they're just fooling themselves?

RN: Well, first of all, why don't they ask the Democrats that if they're so terrified of that prospect, why the Democrats can't be defeating the Republicans? If not landsliding them? It's because they're decayed themselves. FDR would have landslided Tom DeLay and George W. Bush, and so on. Harry Truman would have ... this is not the old Democratic Party. I asked one prominent Democratic politician, "If the Republicans are so bad, as you think they are, and they're worse, why aren't you landsliding them?" He said, "Because they have so much money they cloud the issues." I said, "That's not an excuse, from the oldest political party in the United States, that can raise plenty of money, and has a presence in every nook and cranny in the United States." That's the problem. As long as they give you the money answer, that means they don't have enough confidence to challenge the corporate powers that control them and send a clear message to the American people that they're standing for working families in this country.

That's what used to win for the Democrats. Years ago, the Republicans were considered the party of the wealthy, and the Democrats were considered the party of working families. That's what won for FDR time and time again, and into the Forties. So they have to look into themselves, first and foremost, stop their whining and carping, and get down to where the people are, instead of competing with the Republicans in electronic combat over television, with 30-second nonsensical ads that require them to dial for millions of corporate dollars to pay for them.

It's time to give them another jolt. They didn't get enough of a jolt in 2000, because, quite properly, they thought the election was taken from them, stolen from them. Maybe we let the situation play out for a few months. I've told them, I've tried to predispose them to a more rational course of action by showing how to take the present administration apart, in ways they never would think of, because they're too myopic, they're too routine, they're too repetitious, they're too indentured to the same commercial interests. It dulls their imagination. The last innovation in presidential politics, apart from Dean's Web fundraising, is television make-up. 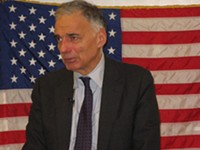 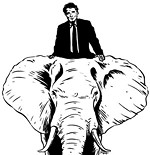