All the Hottest Clubs 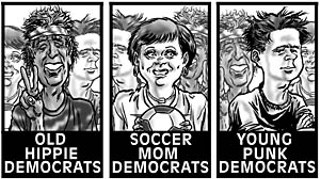 Most of Austin's many political clubs meet about once a month, though some remain dormant until election season. Most groups claim not to accept new members during the 30 days prior to endorsement meetings. More info on Democratic groups can be found at www.traviscountydemocrats.org.

In addition to these clubs, a number of issue-specific groups get involved in the political season, including environmental clubs like the Sierra Club, Clean Water Action, the Texas League of Conservation Voters, and the Texas Environmental Democrats; the AFL-CIO Central Labor Council and individual labor groups (including Austin's police and firefighter unions and the two Travis Co. sheriff's officer unions); and the Travis Co. Bar Association and other lawyers' groups, which take particular interest in the judicial races.

Austin Progressive Coalition Candidates winning endorsements from both University Democrats and Central Austin Democrats get the APC seal of approval – considered the Rolls Royce of endorsements. The endorsed hopefuls get their names printed on slate cards that APC hangs on thousands of doorknobs across the central city.

Central Austin Democrats CAD emerged in the mid-Seventies and is today among the largest and most influential of the Dem clubs. Membership is open to those in precincts within or adjacent to Town Lake, RM 2222, I-35, and MoPac.

South Austin Democrats Old party stalwarts south of the river head to Rosie's Tamale House once a month for socializing and serious business. Voting members must live south of the river, but the group's annual fundraiser and Yeller Dawg award ceremony draws folks from all corners.

West Austin Democrats Founded in 1968 as the Tarrytown Democrats, WAD takes in members west of Lamar and south of 35th Street. The average age for members is about 50. The group this year founded a political action committee to add some muscle to its endorsements.

North by Northwest Democrats NXNW emerged in 2001 to pick up where CAD's boundaries left off. Membership is open to anyone, but voting members must live north of the river. The group took in nearly 50 new members this year as candidates hustled to get their supporters enrolled by the Jan. 12 deadline.

Capital Area Progressive Democrats Winning an endorsement from this group, formed 10 years ago, requires a two-thirds majority vote. As such, the Cap-D's only managed to endorse this year in three out of eight races.

Capital City Young Democrats This new group appeals to voters in their 20s and early 30s by emphasizing social activities and hands-on volunteer work for its candidates of choice.

Austin Lesbian/Gay Political Caucus Stonewall Democrats The ALGPC is a nominally bipartisan group that typically leans Democratic in all respects. Formed in 1979, it's fairly active year-round with registration drives and get-out-the-vote efforts; an ALGPC endorsement goes a long way for liberal progressive candidates. The Stonewall Dems formed to put a specifically Democratic face on the gay/lesbian/bisexual/transgender community.

Austin Women's Political Caucus Travis Co. Democratic Women's Committee AWPC, a bipartisan product of the Seventies consciousness-raising era, serves as a training ground for women with political aspirations. Its endorsement meetings are legendary, with lively debates lasting well into the evening; for male candidates, an AWPC endorsement is a rare event. The TCDWC, the oldest local Dem club (founded in 1953), notes in its most recent newsletter that less than 10% of its 300 members regularly attend meetings: "What they are really interested in is getting our recommendations on candidates."