On the Biotech wave, some Texans ride higher than others 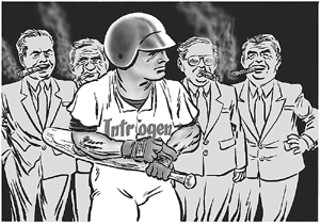 If you look on the fifth page of Gov. Rick Perry's personal financial disclosure form on file at the Texas Ethics Commission, the first investment listed is for his son Griffin's trust fund. The youngest Perry was a baseball standout at Austin High School and is now an undergraduate at Vanderbilt. The contents of his trust are public knowledge, while those of the governor himself are not. Rick Perry's own investments have been placed in an unregulated "blind trust" – in theory to prevent self-interested policy actions – the value of which is not declared.

Griffin's investment is an undisclosed number of shares (fewer than 500 is all we know) of a company called Introgen Therapeutics, an Austin-based pharmaceutical developer in the cancer-cure business. Start-up pharmaceuticals are a particularly volatile industry, but Introgen is one of a growing list of companies doing business in Texas and hoping to make this state competitive with California and Massachusetts in the biotechnology boom. In a speech two years ago, Gov. Perry laid out his vision for Texas' business future, foreseeing a prominent role for biotech.

In fact, Perry created an advisory council of statewide leaders in science, business, and academia, and even took a moment to praise Introgen specifically, as well as its president.

"I want to make sure that Texas is a leader in biotechnology – what many call the most promising scientific and technology frontier of the 21st century. And I want the council to identify ways to commercialize intellectual property, turning an idea into a marketable medicine or product, what people in the industry refer to as a technology transfer," the governor said. "One of the members of this council is David Nance, the founder of Introgen Therapeutics. Introgen has done groundbreaking work in developing gene therapies to treat cancer.

"And where did this research start? At the University of Texas M.D. Anderson Cancer Center."

The idea is that Texas first moved from cattle to oil as its business mainstay, and now, with a more generalized manufacturing/agricultural economy, the state needs to position itself to ride the next wave. In the biotech industry, however, it's usually feast or famine. Years of research and hundreds of millions of dollars in investment can go down the drain if clinical trials fail, or if the U.S. Food and Drug Administration says no to licensing.

If, on the other hand, a drug survives clinical trials and is licensed – a milestone that Introgen's leadoff product is apparently near – it's also a license to make money. Investors can find themselves swimming in cash, especially when you factor in the possible market for the Holy Grail of Medicine, the magic bullet: a cure for cancer. Even the holder of a few hundred shares, like the governor's son, stands to make a lot of money for a comparatively small investment.

In this case, not everything has been left to chance. Introgen Therapeutics has received quite a boost from the state of Texas, part of the effort the governor described to "commercialize intellectual property" – intellectual property paid for and developed at taxpayer expense. Not only Griffin Perry stands to gain, but also high-ranking state officials, which is the dubious flip side of the governor's effort to diversify the state's economy.

Who Stands to Gain?

"Introgen was founded in 1993 to develop products based on discoveries that showed that genes could be used as therapeutic agents," said David Nance, Introgen's president, during a 2001 Wall Street trade paper interview. "We focused, and continue to focus, on a very large, unmet need in cancer for a minimally toxic therapeutic that could be broadly applied to virtually all tumor types, and be administered alone or in combination with conventional cancer treatments." Gene therapy is different from past chemical and viral attacks on cancer, because it goes to the root cause, a malfunctioning replication of cells. Side effects, in theory, should be minimal.

Introgen, a leader in this field, has expenses of about $12 million a year and no income, because it does not yet have a product line. That may soon change. Advexin, designed for head and neck cancer but with possible wider applicability, was granted fast-track approval status by FDA Commissioner (and Austin High graduate) Mark McClellan, and may go into production as early as this year.

The advisory council appointed by Gov. Perry, which included Nance, concluded that "Texas should link its existing private sector advantage with academic and entrepreneurial endeavors, finding new ways to leverage that strength." In addition, "Academic institutions should adopt competitive practices for technology development and transfer." Great emphasis was placed, as the governor demanded, on transfer of patents and technology from the state's university systems to private companies. In practice it has not been a pretty process.

You need a scorecard to keep track of the potential conflicts of interest.

William "Dollar Bill" Cunningham, who was UT System chancellor when the university first began to transfer technology to Introgen, is now on the company's board of directors. (After being eased out as chancellor, Cunningham's day job is now as a $183,000-a-year marketing professor at UT Austin.)

As noted by UT Watch, a student research group that keeps a skeptical eye on the UT System and its investments, Tom Loeffler was a regent and member of the UT Investment Management Company when UT turned over its first patents to Introgen, and UTIMCO received its first block of shares, in 1994. He then joined the Introgen board and became a major stockholder. Loeffler, a former Republican congressman, was widely accused of a conflict of interest, and eventually left the board of Introgen and of the regents/UTIMCO. As a mea culpa, he sold his Introgen shares and gave the money to charity.

Charles Miller, a Houston investor who is chairman of the regents, has a seat on the UTIMCO board despite owning "more than 10,000" shares of Introgen. (At the present time, the value of UTIMCO's stake in the company is about $10 million.)

Last summer Gov. Perry, in a much-criticized move, solicited and received tens of thousands of dollars from major companies in the state for his Texas One Round Table, a business promotion fund with still poorly described functions. Introgen gave $50,000 to the governor's fund, with a promise of $100,000 more.

There are about 26 million shares of Introgen extant. UTIMCO owns 1.2 million, part of a deal at the biotech firm's founding, which gave UT one-quarter of the original shares (one-half of which were distributed to M.D. Anderson's research scientists.) That one-quarter share of the company has been diluted in succeeding years as more stock has been issued, but in addition the university will receive a 1.5% royalty on all sales of Advexin, Introgen's most promising drug – if it is licensed by the FDA, which seems very likely. "We have about 11 patents that cover Advexin," Nance told investment analysts recently, "and those that don't emanate from the University of Texas are owned [outright] by Introgen."

There are apparently more UT-Introgen deals in the pipeline. A 2003 e-mail between UT contract-review staff and Introgen raises the possibility that the company has tried for advantage in future deals that the university can't legally grant.

"As a state institution," an M.D. Anderson contract analyst wrote during recent negotiations, apparently in response to an Introgen request for a particularly sweet deal, "M.D. Anderson does not have the authority to grant royalty-free licenses for any of our inventions, as any invention by M.D. Anderson is technically owned by the taxpayers of the State of Texas, with oversight by The University of Texas Board of Regents. To request giving these rights away, we would be required to go before the Board of Regents, and we would have to have a compelling business reason for giving up such intellectual property rights. We would be happy to grant such a license for Introgen's 'internal research purposes' or 'non-commercial purposes,' if this was specifically stated."

David Nance, the company's president, said that the e-mail could be misread. Introgen was, in a sense, a child of M.D. Anderson's scientists and private businessmen, and included intellectual capital of UT System, but also a large hunk of the green kind of capital from investors. (He noted also that to develop a single drug in the U.S. currently requires about a dozen years on average, and about a billion dollars.)

A Coincidence of Interests

What's interesting here is that Gov. Perry's "vision thing" is probably correct. Biotechnology is not the next wave, it's the present wave, and Texas is still trying to get on board. There's a lot of first-class science and medical research being done in the state – at M.D. Anderson, UT Southwestern Medical Center at Dallas, Baylor University, UT Medical Branch and elsewhere – much of it financed at public expense. The best way to connect academia and private enterprise has not yet been formalized.

If you travel to East Texas and see abandoned oil rigs, or go to the Panhandle and smell the unmistakable aroma of pig shit rising from industrial-sized animal-raising operations, the antiseptically clean allure of biotechnology has a certain charm. Nance, the Introgen president, noted in a telephone interview that research science is "the ultimate renewable resource," and that Texas' share of that resource is located squarely between the ears of the state's scientists, many of them laboring at public universities. "I think a very complex political organization like the University of Texas is finding its way through this process," he said of efforts to formalize the public/private partnership. The operative word here may be "political."

Anyone who has seen a friend or family member suffer with cancer would say that medical technology needs to advance. What's unfortunate is that our public officials, responsible for setting the standards for that public/private cooperation, are also trying to serve their own personal ends. In this case the only one you can't blame is a certain former Austin High baseball player. Griffin Perry isn't a public official. He didn't buy the stock – it was given to him, presumably by the state's first dad.

Gov. Perry's office declines comment on Introgen and has sought the attorney general's protection to avoid disclosure of documents related to the company. A spokeswoman for UT-M.D. Anderson's president, Dr. John Mendelsohn, says that neither Mendelsohn nor any of his senior staff owns stock in the company. That's good news. The present UT System chancellor, Mark Yudof, declined the opportunity to make the same pronouncement. That's not so good.

UT regents Chairman Charles Miller also refused comment. And it's impossible to say now whether Gov. Perry's "blind trust" includes Introgen stock. But, starting next year by order of the Legislature, the governor will at least be required to place a yearly value on his total investments, something that is not currently required.

At press time, Introgen was trading at about $9.16 a share. The rest of the public could do worse than to follow the governor's example in his choice for his son's future financial security. After all, during a career spent entirely in public service, Rick Perry has reportedly become a millionaire. His secret? 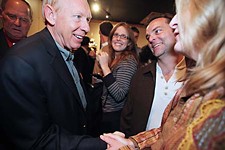 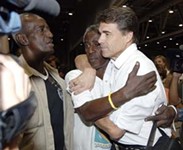