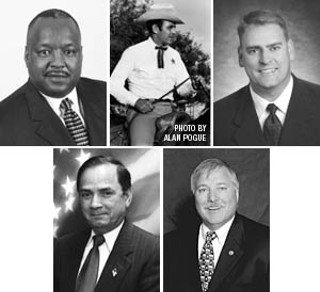 By the time Travis Co. Sheriff Margo Frasier announced in December that she would not seek re-election to the post she first won in 1996, veteran APD Cmdr. Duane McNeill had already spent three years contemplating a run for the county's top-cop spot. During his pondering, McNeill assumed like many others that he would enter a Republican primary race whose winner would go on to face Frasier in the general election. But on Dec. 12, when Frasier announced her retirement, that supposition quickly evaporated; with the county's first female sheriff out of the running, the field was wide, wide open. In all, eight candidates – four Democrats and four Republicans – will be on the March 9 ballot, vying for the job Frasier is leaving behind. "It's an uphill battle just getting through the primary," McNeill said during a recent phone interview – and he isn't kidding.

Here's the deal: Each candidate says he's the most qualified and the most pragmatic. Each believes in strengthening community relations and in scrutinizing – and, perhaps, scrubbing – the office's budget. To make the choice just a little more difficult, there aren't any obvious losers to toss out of the mix.

In fact, this time around it's quite the opposite: Travis Co. voters are blessed with a field of intriguing candidates who, for the most part, agree on the direction the department needs to go – with the possible exception of Democrat contender and former Sheriff Raymond Frank, the lone retro candidate. (Unlike his opponents, Frank's public comments suggest that he thinks things at TCSO, for the most part, are OK just the way they are.) That said, the real distinctions among the eight are in the nuances of how they would move the TCSO forward and address a multitude of issues facing the office – from effectively serving a growing population with a relatively stagnant county tax base, to assuaging the internal strife between the office's law enforcement and correctional officers.

The latter issue – a sort of sibling rivalry between the TCSO's two groups of officers, fueled by a disparity in pay scales (enforcement deputies consistently command higher pay) and the feeling that law enforcement officers have had more say inside the officers' association and with the sheriff – is likely to be one of the biggest challenges for Frasier's successor. In 2002, the discontent peaked, and the previously united Travis County Sheriff's Officers Association split into two separate union groups (the TCSOA and the Travis County Sheriff's Law Enforcement Association). "There's been so much friction, and nobody has stopped to address it," said Republican A.J. Johnson, a 20-year APD veteran who retired early to run for sheriff. Left unchecked, the friction threatens to lower morale and negatively impact officers' relationships with the communities they serve.

"I would propose that the leadership [of the two unions] come together at the table and hash it all out," he said – a notion that the majority of candidates favor. Still, GOP candidate Joe Martinez isn't so sure that having two separate unions is such a bad idea. "Each has their own specific needs," he said. "I have to address [each] as [an] individual unit under [one] sheriff's umbrella." He said the two bodies should be "thinking on their own" and that it would be his job to make sure that each group's concerns are brought to the attention of county commissioners.

While the disparate pay of correctional officers and law enforcement deputies is a constant source of friction, Martinez said there isn't enough money to offer equal pay, and that correctional officers shouldn't expect it. "Everybody thinks their job is the most important," he said. Correctional officers "knew what the job paid when they got there." Only Democrat candidate Kyle Kincaid, a former Brazoria Co. deputy, airline industry fraud investigator, and recent UT law school grad, said pay should be equal for both groups. The jobs are "equally dangerous and equally important," he said. Raises for correctional officers wouldn't come "overnight," but could be "stabilized" through attrition and incremental raises. Republican Drew McAngus, a former TCSO deputy elected as Precinct 3 constable in 2000, says equal pay would be great, but he doesn't see any way to make it happen without increasing taxes, which he does not support – a sentiment shared by the other candidates.

But, as the only current elected official in the race, McAngus said he already has a good working relationship with the Commissioners Court and knows what it takes to stretch and prioritize county funds. "I understand that the budget process is a give-and-take," he said, that requires adhering to specific parameters while ensuring flexibility "up and down" to accommodate relatively unforeseeable costs – for example, the cost of health care for inmates at the Travis Co. jails. Democrat Greg Hamilton, a former TCSO officer who worked in both corrections and law enforcement before going to the Texas Alcoholic Beverage Commission as chief of statewide law enforcement operations, said he would scour the office's $87 million budget in search of savings.

"We need to evaluate the effectiveness of various programs and the placement of officers" to ensure that resources are maximized, Hamilton said – adding that he favors "splitting the corrections and law enforcement budgets" to further assess and then best allocate the available funds. Fellow Democrat Todd Radford, a former TCSO law enforcement deputy who is now a policing consultant and trainer (specializing in, among other things, police use of force) agrees that TCSO needs two separate budget processes. "We have limited resources for infinite roles," he said, and he'd like to "split the budget between corrections and law enforcement to determine who needs [what piece] of the pie and where our money is spent."

McNeill, a 24 1/2-year APD veteran, said he has more administrative experience than the other candidates, experience that has taught him how to stretch a budget. He's attended five long-term management schools, he said, and knows how to run an efficient operation, which means making sure officers are assigned to tasks they're suited for. "Commissioned peace officers need to be put into enforcement assignments," he said, "not in the schools and not in the press office," which would help to ease budget pressures in a variety of ways – for example, by reducing overtime expenditures.

Still, McNeill knows that part of an officer's duty is to interact with the community, and that would remain a priority after any staffing shuffle. He'd like to see more officers involved in volunteer projects – like sponsoring and coaching Little League sports – so that county residents get to know the "person behind the badge." He's not alone in pledging his commitment to community relations; each of the candidates says that strong community ties are what effective policing is all about.

McAngus comes from what he calls the Andy Griffith school of community policing. "That's the type of sheriff I'd be – open, available, [and] honest ... with the community," he said. Martinez has similar thoughts on the subject, but prefers the "Officer Friendly" analogy, which is heavy on officer interaction with schoolkids. Kincaid said he'd like TCSO to work in a liaison capacity with other county offices – interacting more with probation and juvenile services in an effort to "stop the revolving door in and out of jail." And Radford says he'd like to expand community policing and education efforts through better communication and "accessibility."

Johnson said there are many practical ways to ensure that officers are interacting with the community while not answering calls for service – for example, through reporting and supervisor review of dispatch data. There are simple techniques to make sure deputies are "dropping their gun belt in the trunk and ... playing ball" with neighborhood kids between calls, Johnson says – a priority that Hamilton said he shares.

Frank, who served as Travis Co. sheriff from 1972-1980, has campaigned on an old-school platform – saying he'd like the unions to come together, would wait to assess the budget until elected to office, and would handle disciplinary and other personnel matters through the established chain-of-command protocol. But he broke that mold last month by publicly denouncing any potential local enforcement actions under the federal USA-PATRIOT Act. "I can tell you right now, I do not believe in [that law]," he said at a candidate forum last month. The law lowers the bar for legal search and seizures, and throws "free speech out the window," he said. "Remember, your kids are going to have to live with that," he told a mostly law enforcement audience. "And you won't always be police officers."