Tweet
print
write a letter
There are about two dozen direct recording electronic vendors from which states could choose, but the big boys are Diebold, ES&S, Sequoia, and Hart. It's difficult to nail down market-share stats with certainty, but a chart in Diebold's 2003 annual shareholders report broke down 2002's $345 million in DRE sales thusly:

Hart VP Bill Stotesbery says his company may have passed Sequoia into third place after signing contracts with Harris Co., Texas, and Orange Co., Calif. In any case, Hart is widely believed to be at least fourth in overall market share. 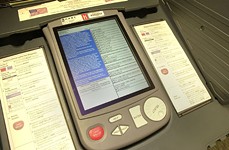