Nixon, Farmers off the hook

Tweet
print
write a letter
Prosecutors with the Travis Co. District Attorney's Public Integrity Unit have concluded that Farmers Insurance did not engage in any criminal conduct in connection with nearly $300,000 in claims paid to state Rep. Joe Nixon, R-Houston, according to two letters penned by assistant DA and PIU Director Greg Cox. After thoroughly reviewing documents and interviewing witnesses, Cox wrote to John Hageman, Farmers' executive director for Texas operations, "[W]e have determined that there is no evidence of criminal conduct, and the investigation will be formally closed. ... This office will take no further action regarding this matter."

The DA launched its investigation after the content of an internal Farmers e-mail, leaked to reporters in August, alleged that the insurer paid a string of noncovered mold-related claims on Nixon's Houston home in order to secure Nixon as a "friend of Farmers during the [l]egislative session." (See, "Did Farmers Buy off Nixon?" Aug. 8, 2003.) An e-mail inquiry regarding the questionable payout was sent by Farmers' former National Mold Claims manager Isabelle Arnold on April 30 to her supervisor, Jim Daues, Farmers' claims manager. In the e-mail, Arnold complained that Nixon had been paid on a claim twice denied by Farmers' adjusters after Hageman and Jim Killian, a Farmers government affairs officer, "strong-armed [the claims officers] into paying this noncovered claim," she wrote.

Daues sent Arnold an e-mail reply on June 4, saying that two of Farmers' corporate honchos "called me about this claim and wanted Mr. Nixon to be a friend of Farmers in the legislative session. ... Each one strongly suggested that an additional payment would be very helpful to the cause." (On June 30, Arnold filed a whistle-blower suit against Farmers, claiming that she was fired from her job in retaliation for raising concerns about the company's mold-claim handling practices. The suit is pending in California.)

Nixon, sponsor of the controversial tort-reform package that passed through the Lege this spring, was quick to defend himself against the charge, claiming that the allegation was just another attempt to "impugn the character of the legislator who passed tort reform." In a letter to Nixon, Cox wrote that Nixon was "never considered a suspect" in the inquiry. "I hope that our closure of the investigation allows you to put this matter behind you," he concluded. 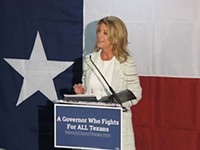 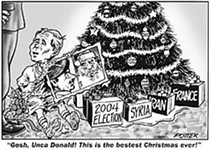