Lloyd's friends at the Lege 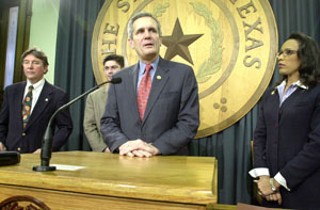 Breaking ranks with their Senate counterpart Gonzalo Barrientos, the three Democratic members of the Travis Co. delegation in the Texas House – Dawnna Dukes, Elliott Naishtat, and Eddie Rodriguez – on Monday eagerly declared their support for U.S. Rep. Lloyd Doggett in his campaign to win re-election to Congress from the new Austin-to-McAllen District 25. All three claimed that supporting the five-term incumbent was the most consistent next step after the Democrats' summer of fight and flight to stop congressional re-redistricting. "If we don't re-elect Lloyd Doggett," said Dukes, "then Tom DeLay wins, and that's just not right."

Under the new map, Travis Co. is split among three districts (and the Austin metro area among seven), including the new District 25, whose population is about two-thirds Hispanic and which was drawn to presumably elect a Hispanic to Congress. This was supposed to offset changes that diminished Hispanic voting strength in other parts of Texas, and thus make the new statewide map acceptable under the federal Voting Rights Act. But District 25 is the only Austin district likely to elect a Democrat, and Doggett announced – long before the map was upheld in federal court – that he would take his chances with new constituents in the Rio Grande Valley. This, among other things, drew the ire of Barrientos, who – after indicating his willingness to challenge Doggett himself – instead threw his support to former Hidalgo Co. District Judge Leticia Hinojosa. The winner of that matchup will likely face another Hispanic woman in November: former state Public Utility Commission Chair Rebecca Armendariz Klein, the favorite in the GOP primary.

Naishtat and Dukes have long been Doggett backers, and Dukes had already endorsed the congressman in his current campaign, but freshman rep Rodriguez – a native of the south end of District 25, whose own family includes Hinojosa backers and campaign volunteers – was put in a potentially awkward position by the race. "I did all I could to preserve Austin's representation in Washington," Rodriguez said. "My whole district is within District 25; my constituents are all Lloyd Doggett's constituents, and he's represented them well. My primary responsibility is to my constituents. I cannot let the Republicans undo what Austin has successfully done for so long – build coalitions of Hispanic and African-American and Anglo voters to elect the best candidates for all offices."

Naishtat and Dukes sounded similar themes, touting Doggett's success for 30 years (beginning with his election in 1973 as Barrientos' predecessor in the Texas Senate) at representing Travis Co. and echoing Austin's liberal, populist, Democratic values on issues like health care, affordable housing, environmental protection, and consumer rights. But even more important, they argued, were all the reasons the Texas Dems fought re-redistricting in the first place – preserving the state's congressional seniority and protecting the interests of minority Texans who had long been well served by Anglo Democrats like Doggett. "It is important to send the message that you can't get rid of people like Lloyd Doggett simply by changing the lines," Naishtat said.

For his part, Doggett – who's now been endorsed by 21 elected officials in Travis Co., compared to one (Barrientos) for Hinojosa – stressed the importance of vocal support on the hometown end of the district. "I don't want folks here to forget about this election," he said. "My political future will be determined in six weeks. We need tremendous turnout." Doggett, who's been far more visible in the southern end of the district during this campaign, expressed his disappointment in Barrientos' stance but preferred to look ahead. "This campaign isn't about gender or race or geography, but about the ability to deliver results," he said. "After the election, we'll have to put these differences aside. ... Each of these representatives will have to continue working with Senator Barrientos, and I hope to do the same."