Temple-Inland Reads the Writing on the Wall 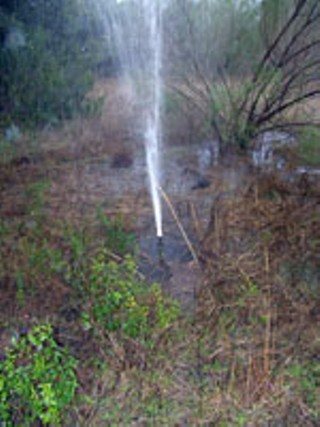 Save Our Springs activists say this photo shows a water-quality control device on Temple-Inland property failing. (Photo By Tim Jones)

The finger-pointing that followed Temple-Inland Inc.'s decision last week to cancel its expansion plans over the aquifer seemed like a throwback to another era, with Greater Austin Chamber of Commerce leaders blaming environmentalists for wiping out the prospect of hundreds of new jobs.

But greens of all shades and at least one City Council member were quick to set the record straight on that score. "Everyone in the community – from environmentalists to business leaders – wants jobs in Austin," said Council Member Brewster McCracken, who early on appeared friendly toward the company's expansion. "But this was an environmental issue, not a jobs issue. Austin has never been a city that sacrificed the environment for dollars."

Aquifer advocates would argue that sacrifices have already been made, but they're satisfied for now that Temple-Inland won't force the city to make yet another concession. Unlike many other large commercial projects over the aquifer, the T-I headquarters campus at MoPac and Barton Skyway has no grandfathered claims that would allow for more development than is allowed by the city's Save Our Springs Ordinance. But the promise of new jobs prompted Mayor Will Wynn and chamber leaders to go to bat for Temple-Inland. Wynn set about trying to drum up the six council votes necessary to allow the company to build beyond the scope of SOS. But those six votes didn't appear likely, and a firm proposal from the Fortune 500 company never materialized.

The T-I headquarters is one of only two commercial projects over the aquifer that have been built in compliance with SOS. Last week, however, enviro activists Tim Jones and Stefan Wray turned over photos and videotape to media outlets that they said showed a not-so-compliant irrigation system, which is supposed to control stormwater runoff from the company's site. Jones and Wray captured on film a sprinkler head system that had gone awry during recent rainstorms, creating standing pools of runoff. Jones, a member of the city's Environmental Board, said he made a follow-up visit to the site and the sprinkler head had been repaired.

Last Thursday, Jones joined representatives of several environmental groups, including the Save Our Springs Alliance, Sierra Club, Texas Clean Water Action, and Texas Public Interest Research Group, for a press conference on the steps of the Temple-Inland building. As a cluster of TV cameras trained on the environmentalists against a backdrop of T-I's tinted windows, the enviros passed out copies of the video, a letter they had written to Temple-Inland CEO Kenneth Jastrow II, and other material, including some unfavorable EPA data on the toxic record of T-I's Texas paper-manufacturing operations. The firm, which started out nearly a century ago as an East Texas lumber concern, is now a player not just in forest products but in financial services, as Guaranty Bank and Guaranty Insurance Managers Inc., and real estate, as Lumbermen's Investment Corp.

An interesting side story: The enviros also handed out copies of an e-mail exchange last fall between Wynn and Statesman editorial page Editor Arnold Garcia. Wynn asks Garcia to keep the Temple-Inland story hush-hush while he tries to negotiate the necessary votes from council members, and Garcia agrees to "keep a lid" on the information. Two months later, the Austin Business Journal broke the story, forcing the Statesman to play catch-up (see "Reading Arnold's E-mail," below).

The morning after the press conference, the company announced in the briefest of statements, "Temple-Inland Inc. has withdrawn its request of the city of Austin to explore opportunities for expanding office space on its current headquarters site." The decision surprised many opponents, who had figured they were in this battle for the long haul. "We're very pleased with Temple-Inland's decision not to pursue expansion of its headquarters in the Barton Springs watershed," said SOS Alliance spokesman Colin Clark, while questioning the chamber's accusatory stance. "We are disappointed to hear some in the business community bring back the 'jobs versus the environment' rhetoric. Didn't we all agree years ago that a clean Barton Springs is better for Austin's long-term economic vitality than a cesspool with thousands of acres of pavement upstream?"

In the letter to Jastrow, SOS leaders and others pointed to Austin's surplus of office space to encourage Temple-Inland to expand in the city's Desired Development Zone and off of the aquifer. The letter was signed by several environmental groups and three individuals – Mary Arnold, Robin Rather, and Shudde Fath – but the noticeable absence of the Save Barton Creek Association from both the letter and the press conference raised some eyebrows in the green community. Harold Daniel, the president of SBCA, said, "We read the letter as a group and decided it was best to send our own letter." The group was still in the process of drafting that letter when Temple-Inland announced its decision, he added.

Jon Beall, former president of SBCA, said he and other members of the organization had been working on negotiations with Temple-Inland that would have allowed for the expansion in exchange for mitigation dollars to acquire other watershed properties. "We were very interested in the mitigation that was being discussed. They had an initial offer on the table for a water-quality pond that would capture the runoff and $1 million for mitigation land someplace else," Beall said, noting that he was speaking individually and not for the organization. Though he chose not to participate in the opposition to the expansion, he took issue with some business leaders' knee-jerk characterization of those who did. Their depiction, he said, "is a bit of an exaggeration – and that's putting it politely."

Former SOS leader Robin Rather, who helped forge a working relationship between the business and enviro communities, was more blunt. The Chamber of Commerce, she said, "seems to be going backward in time instead of forward. We have already fought the jobs versus environment battle back 10 years ago, and the conclusion on nearly all sides was that we need to concentrate on policies and actions that protect both," she said. "All the major environmentalists – even the most die-hard SOS activists – understand Austin's need for jobs, and were as vocal about protecting them as they were about protecting water quality."

Chamber spokeswoman Saralee Tiede agreed that the issue is not jobs vs. the environment. "The chamber is acutely aware of and is very proud of our environment," she said. "We don't view this as necessarily an either/or situation, but we do think this could be interpreted by other businesses as a message that says the welcome mat is not out."

On another front, Temple-Inland is on this week's City Council agenda to lease 2.4 acres at Austin-Bergstrom to build a new corporate aircraft hangar.